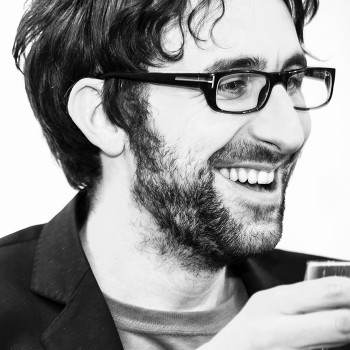 We catch up with multi-award winning comedian Mark Watson as he prepares to head out on his UK 'I'm Not Here' tour next year. A See Tickets exclusive pre-sale starts Monday 14 September and tickets are available here from 9am.

Can you tell us what kind of topics will you be delving into in your upcoming tour?

The show is based loosely around an alarming incident at an airport last year. I use that as a starting point to discuss the digital revolution and the way it's made us see the world and ourselves differently.

Hopefully that makes it sound like I'm not just rattling on about myself and my problems again. When clearly, that IS what l'll be doing mostly. Are you constantly looking for things in daily life that can inspire your comedy content? Or do you find you’re often caught by something unexpectedly that then becomes a centre piece to your stand-up?

You can't go through life constantly looking for funny stuff to happen or you'd be a psychopath (I know this because some comics do, and they are). So yes, it's more a case of waiting to see what inspiration life doles out and being receptive to it. And if a bird DOES fly into a man's face - as once happened and gave me 10 minutes of material - well, that's a bonus.

What were the highlights for you of the 27-hour comedy marathon for Comic Relief (apart from finishing, we expect!)?

There were big highlights like Anneka Rice doing a special treasure hunt or Russell Brand taking part in a bending tournament (hard to explain). But in a way my favourite thing was the crazy challenges people did: for example a guy churned butter for the whole 27 hours. That's what it's all about.

Do you think the world of stand-up comedy has shifted with many comedians now embarking on huge arena tours that many years ago were reserved only for bands?  Is that level of touring now something people starting out in comedy aspire to do you think?

There are certainly more arena comedy shows than you'd ever have believed there would be 20 years ago, but I think we're past the peak of people talking about stand-up as a new form of rock and roll.

Comedy in a huge space doesn't necessarily work as well as music- because comedy's so much about intimacy. Some people can make it work, but it's not always the thing comics aim for. You want to get to a level where you're still really connecting with your crowd personally, but making more than 10p per show. It took a while but I'm there.

Who is the best / funniest comedian that you’ve seen live and why?

Hard to pick one. Tim Key is probably the funniest human I know of. Dara O Briain, Lee Mack, Milton Jones would all be up there if we're talking about more conventional standup. And there's a newish comedian called Sean McLoughlin who is my tip for the big time.

If either of your children wanted to pursue a career in stand-up in the future what advice would you give them?

I'd initially discourage them because it always seems so naff when it becomes 'the family business'. I'd warn them it's a tough game, insecure, hard to make a living etc.

But if they persisted I'd also admit that it is wonderful in a lot of ways. You should always try and find something you enjoy as your work, rather than something you have to do. So if that's comedy for them, I'll support it. But I'd rather they became landscape gardeners or architects.