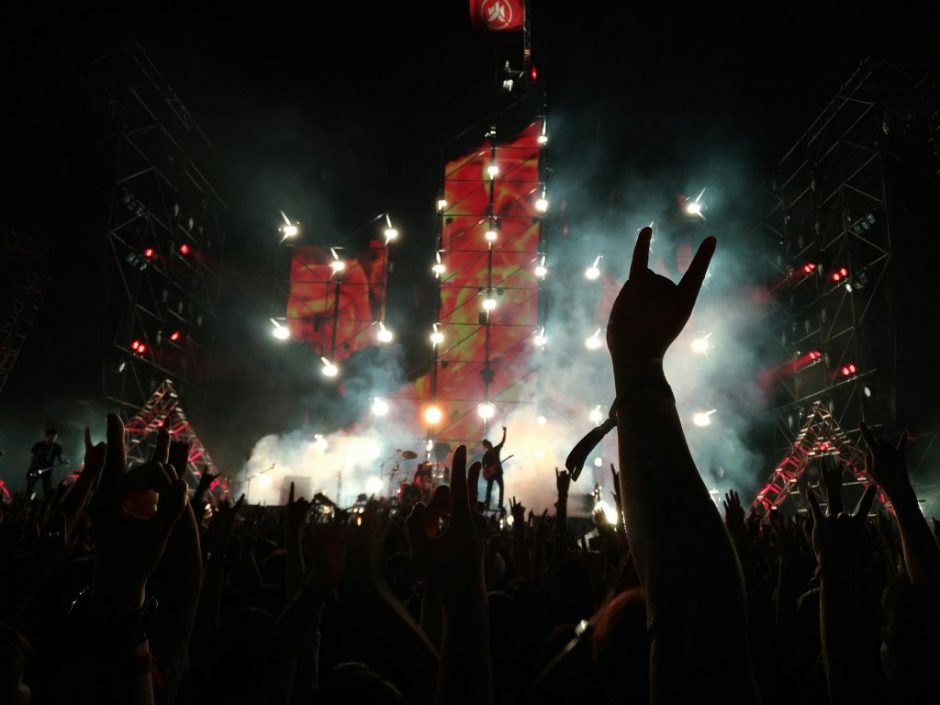 With 2016 firmly under way, it is time for some of the best bands from the rock and metal world to hit the road. Here are five tours you don't want to miss this month.

Enter Shikari with The Wonder Years and The King Blues

Take one UK electro-infused post-hardcore band, take one Philadelphian pop punk band and take one recently reformed ska/folk punk band. Yyou're left with one of the most intriguing but exciting line-ups of the year so far.

The rise of St. Albans' Enter Shikari has been slow but a natural one. With four albums under their belt, their evolution has simultaneously happened alongside their willingness to experiment with their sound. Last years effort, 'The Mindsweep', was praised by fans and critics for its dynamic and expansive direction. Whereas recent single 'Redshift' takes a bold, arena-ready approach.

This forthcoming run of dates sees the quartet playing some of their biggest UK shows to date including London's Alexandra Palace. They'll be joined by The Wonder Years, who like the headliners, released in a critically acclaimed record last year in the form of 'No Closer To Heaven'. Although classed as “pop punk” on paper, the Philadelphia quintet offer more than the genre's standard mix of teenage angst and broken hearts. Songs like 'Cigarettes & Saints' and 'Stained Glass Ceiling' are reflective and thought-provoking.

And to make the bill even more varied, The King Blues return after a four year hiatus to bring their brand of politically-charged punk. The Hackney, London trio fuse ska and folk together to produce an infection style of punk rock.

Buy tickets for Enter Shikari with The Wonder Years and The King Blues.

Iowa's finest Slipknot return to the UK for the third time in just over a year this month. Having once again conquered the Download Festival last summer, it looks like there is no stopping the nine-man group. They return with their chaotic show that has wowed fans on both sides of the Atlantic for the past 12 months.

With a plethora of mosh-ready anthems ('Wait and Bleed', 'Before I Forget', 'The Devil In I') in their arsenal, Slipknot have a reputation of being one of metal's best live acts in recent years. If you've yet to see the masked men, be prepared to have a frenzied time.

Thrash crossover legends Suicidal Tendencies will be apart of the tour as support. They've been cited as an influence by Green Day, Limp Bizkit, Rage Against The Machine and countless more. The Venice, California group take in elements of punk, hardcore and funk to create a monstrous sound that will perfectly warm up fans before Slipknot.

If you're a fan of pop punk, then you'll probably know all about this stellar tour. Wrexham's Neck Deep and New York's State Champs are two of the genres most beloved bands at present. 2015 saw them both deliver stand out records in 'Life's Not Out To Get You' and 'Around The World and Back' respectively. The former is reminiscent of modern pop punk godfathers Blink-182 and New Found Glory. Whereas State Champs produce an array of punchy, hook-filled songs that carelessly make you want to jump around.

They'll be joined by Southampton “gloom punk” band Creeper and Ohio's Light Years for the early February. Creeper formed in the summer of 2014. They have already achieved a lot in a short space of time; countless touring, a growing and devoted following, 2 much loved EP's and a handful of festival appearances including Download. Whilst Light Years neatly produce a blend of emo and pop punk that takes a mature lyrical approach.

THE KERRANG! TOUR 2016: SUM 41 with Frank Carter & The Rattlesnakes, Roam and Biters

The annual tour from one of the UK's top rock publications, Kerrang!, takes place this month. As always it provides an eclectic mix of established and emerging talent. Headliners come in the form of Sum 41. With work on their sixth album nearing completion and guitarist Dave “Brownsound” Baksh rejoining the band last summer, Sum 41 are certainly on the comeback trail. Their back catalogue is led by a handful of classic singles that everyone knows as the Canadian quintet have the flair to produce fun and poppy punk rock.

Joining them will be Frank Carter & The Rattlesnakes. Known for his time with Watford hardcore punks Gallows, Carter debuted his latest project last summer, marking a return his angsty and viscous best. They've quickly built a reputation for pulling a rapturous live show. Next up is Eastbourne pop punk group Roam. With their debut album, 'Backbone', freshly out for all to hear, the quintet have stepped things up with a confident collection of flourishing, feel-good pop punk. Finally Biters from Atlanta, Georgia round off this diverse bill. With their influences consisting of Thin Lizzy, Alice Cooper and Slade, the quartet grab a vintage rock'n'roll sound and pull it into 2016 with swagger and an abundance of solos.

ALL TIME LOW with Good Charlotte and Against The Current

Having topped the UK Album Chart with their sixth album 'Future Hearts' last April and a successful outing at Wembley Arena, it was only a matter of time Maryland pop rockers All Time Low would make UK arena's their second home. This month they do just that. With a winning formula of catchy as possible, guitar-driven pop punk, the quartet have a collection of songs that are handmade for big crowds.

Longtime pals and previous collaborators Good Charlotte will be joining them as the main support. Having ended their hiatus last November, they have been working on a new record. Having unleashed a track called 'Makeshift Love' late last year, it looks like they will be returning to their pop punk glories. Nevertheless classic songs such as 'The Anthem' and 'Lifestyles of the Rich and Famous' are sure to get everyone up and moving in the coming weeks.

Finally we have Against The Current. The young Poughkeepsie, New York pop rock trio have been tipped for big things in 2016. They've built a strong following for their popular YouTube covers of songs such as 'Uptown Funk' and 'See You Again'. The three-piece, led by vocalist Chrissy Costanza, find themselves on the same label as Fall Out Boy and Panic! At The Disco – Fueled By Ramen. With their upcoming album in the works, this latest UK visit sees Against The Current playing to bigger crowds for the first time, but with an accessible and confident pop rock sound, it won't be the last time.

Buy tickets for All Time Low with Good Charlotte and Against The Current.