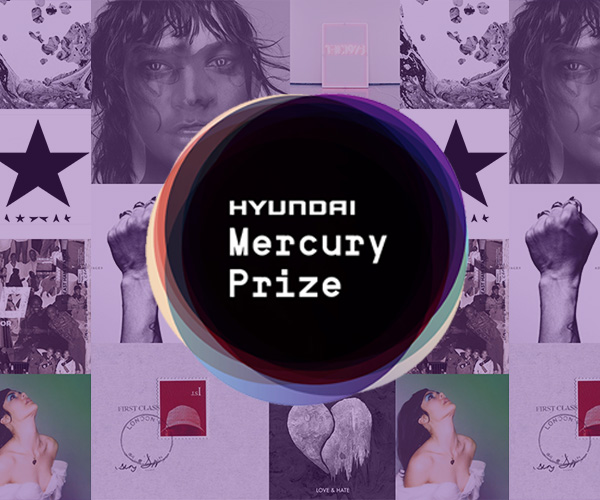 The Mercury Prize shortlist has been revealed for 2016, with an eclectic mix of big names and up-and-coming artists in for the chance to win one of the most prestigious music awards in the industry.

With some huge talent judging this year's prize, including Wolf Alice's Ellie Rowsell, Jessie Ware, Pulp frontman Jarvis Cocker and producer Naughty Boy, the final decision is going to be almost too close to call.

The six finalists and winner will be announced during the 2016 Awards Show at the Eventim Apollo on 15 September. For now though, take a look through the shortlist and maybe catch some of them on tour later this year:

It's got to be pretty humbling to have your debut album nominated for any award, let alone the Mercury Prize. Anohni has that privilege this year, with her stunning debut 'HOPELESSNESS' receiving rave reviews across the board, with The Guardian calling it "as profound a protest record as anyone has made in decades". Winning the prize back in 2005 with her band Antony and the Johnsons, can Anohni pick up another?

Kano - Made in the Manor

One of two grime nominations at this year's awards, Kano's fifth album 'Made In The Manor' was released in March and received favourable reviews, peaking at number 8 in the Official UK Album Chart. 'Made In The Manor' is Kano's highest charting album to date, and features performances from acclaimed musicians such as Blur's Damon Albarn, Wiley and Giggs.

Kano is headed out on tour later this year and has a few festival appearances lined up for the summer.

Bowie's final album, released just two days before he passed in January of this year, 'Blackstar' is nominated for a posthumous Mercury Prize. His 25th release in 49 years, Bowie was no stranger to awards and critical acclaim, with 'Blackstar' being no exception. The Independent regarded the record as "the most extreme album of his entire career". A worthy nomination indeed.

Bat For Lashes - The Bride

A late contender, Bat For Lashes fourth studio album 'The Bride' was released just last month, based on an idea linked to a short film she had made, about a woman going through a tragedy on her wedding day. The album became Bat For Lashes' third consecutive top 10 album in the Official UK Albums chart, debuting at number 9.

You can catch Bat For Lashes live at By The Sea Festival in Margate, Kent (30th September - 1st October) or at Mirrors Festival in London (29th October).

Jamie Woon's sophomore album 'Making Time' was released late last year, the follow up to 2011's 'Mirrorwriting', which paved the way for Woon's nomination as Best Newcomer at the MOBOs and as a nominee in the BBC Sound of 2011 shortlist. The Guardian hailed 'Making Time' as a "triumphant reinvention" and is no doubt a fine choice for the Mercury Prize shortlist.

Birmingham born singer-songwriter Laura Mvula has already raked in her fair share of award nominations over the years, winning Best Female Act and Best R&B/Soul Act at the MOBOs in 2013. Her second and most recent album 'The Dreaming Room' is up for this year's Mercury Prize and features Nile Rogers on its leading single 'Overcome'.

You can catch Laura Mvula at the UK's first AFROPUNK event at London's Alexandra Palace.

Radiohead whipped the nation into a frenzy this year with the release of their ninth studio album back in May. Their sixth chart-topping release, 'A Moon Shaped Pool' was described by Rolling Stone as "a haunting, stunning triumph". Now on their fifth Mercury Prize nomination (following 'OK Computer' in 1997, 'Amnesiac' in 2001, 'Hail To The Thief' in 2003 and more recently 'In Rainbows' in 2008), Radiohead are the most shortlisted band for a Mercury Prize - could this year finally be their year?

British soul singer Michael Kiwanuka’s first studio album ‘Home Again’ was nominated back in 2012, and his second offering ‘Love and Hate’ has been afforded the honour this year. The London born musician has supported Adele on tour, won the BBC Sound of 2012, and this year wowed crowds at the British Summer Time festival in Hyde Park. Pretty impressive!

He’ll be headlining dates around the UK this October – don’t miss out!

The Comet Is Coming - Channel the Spirits

This year’s least-well known nominee are London-based band The Comet Is Coming, who received a nod for debut album ‘Channel the Spirits’. The band’s sound draws inspiration from a range of genres: jazz, electronica, funk and psychedelic rock – with a key influence being the music of cosmic philosopher Sun Ra.

Don’t miss the trio in Leeds this December.

Described as a post-punk revival, noise rock band, Savages hail from London and released second album ‘Adore Life’ back in January. The follow up to Mercury nominated debut ‘Silence Yourself’ – it sees the band take on a new focus, exploring love from various angles and delivering a slightly more relaxed, somewhat warmer sound.

Interested in finding out more? You can catch them later this month at Reading & Leeds.

Rapper, songwriter and record producer Skepta has received his inaugural nomination for the highly revered prize. Fourth album 'Konnichiwa' has a political focus and was released in May to critical acclaim - charting at #2 in the UK Album chart, and featuring a collaboration with Pharrell Williams plus guest appearances from A$AP Mob’s Young Lord and A$AP Nast.

You can see him support Massive Attack in Bristol, or catch him at The Warehouse Project in Manchester this autumn.

The 1975 - I like it when you sleep, for you are so beautiful yet so unaware of it

Praised for its eclecticism and lyricism, (and on my own personal list for the longest album title in existence) 'I like it when you sleep for you are so beautiful yet so unaware of it.' is the second album from Cheshire based rock band The 1975 and also their second number one charting album. The Mercury Prize nominated album was inspired by a huge range of artists including D'Angelo, Christina Aguilera, My Bloody Valentine, Boards of Canada and Sigur Rós.

The band are touring the UK this December, there's still a limited amount of tickets available if you're feeling up for it!