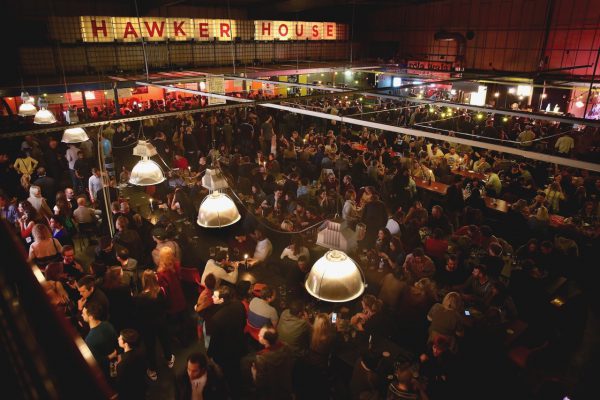 Oktober Feast is a London food and craft beer festival from the Street Feast London team which is behind a number of successful food and drink events in the capital.  Oktober Feast kicks off on Thursday 29 September and you can get your tickets from See Tickets.

We talk to Jonathan Downey, Creative Director at Street Feast to find out more.

Please tell us in your own words, the premise of Oktober Feast.

Rather than just focusing on bratwurst and one of the big Bavarian beer brands, we wanted to create an event that celebrates the brilliant beers of the three great brewing nations – England, Germany and the USA – and then add in some of the world’s best street food. So a bit more modern and a lot more east London.

We’ve got a range of 50 craft beers, 12 of the biggest names in London street food and three epic parties at Hawker House, our Canada Water warehouse, with Field Day Festival DJs instead of an Oompah Band.

We’re also featuring ‘England vs Germany: The World Cup Final of Beer’ with our tasting ticket for two. It’s 50 years since England won the world cup against Germany, so we’re pitting them up against each other once again with two world-class 11-a-side line-ups of lovely beer.

In what ways do you think it differs from other Oktoberfest events?

Our focus is on getting everyone to discover and try as many quality beers as possible rather than just getting lashed on one big sponsor brand.  We’ve worked with beer expert Mark Dredge to curate a list of craft beers; some which you’ll know of, some completely new for people to try. Alongside this our traders will create unique Bavarian-inspired street food specials to pair with the brews.

Can you tell us about the tasting ticket? Do you need to be a beer aficionado to appreciate this?

The tasting ticket for two gets you two ‘Ein Steins’ to kick-off and 20 x ¼ pint beer tastes from a world-class 11-a-side line-up. We’ve approached smaller, independent breweries and the final list consists mainly of Pale Ales and IPAs, with some darker and amber brews. Examples include the Session IPA Centennial El Dorado from Cloudwater brewery and Spaten Oktoberfest from Germany.

As well as beer, there is going to be plenty of food on offer too – talk us through some of the highlights.

We’ve lined up 12 of our favourite street food traders who, as well as serving their usual dishes, will have Oktober Feast specials on the menu. We can’t reveal the full menu yet but you can whet your appetite with the ‘Jerkwurst’ from White Men Can’t Jerk – a choice of either smoked Jerk pork or chicken sausage.