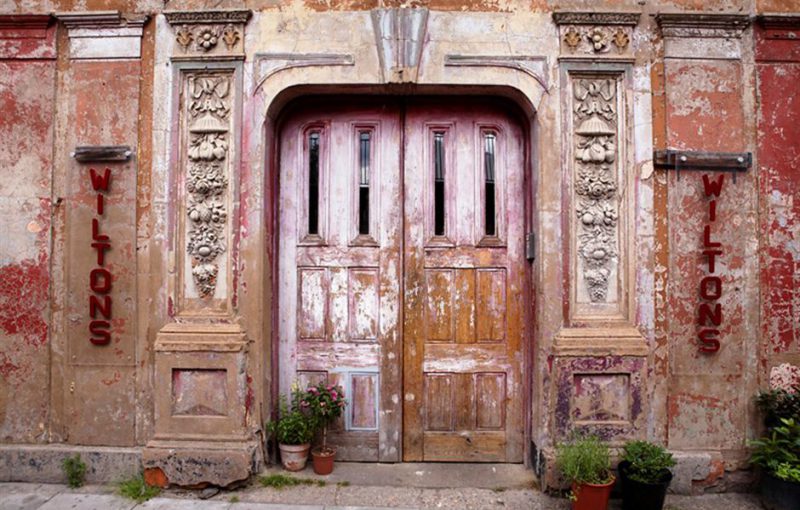 You may have noticed that we recently started selling tickets for events at the beautiful Wilton's Music Hall. So we thought we'd show you just why you should make it top of your list to visit this hidden gem of a venue...

Wilton's music hall is a Grade 2 Star listed building and also the oldest grand music hall in the world. This stunning building presents a year round programme of exceptional live music and world-class productions alongside learning and participation work that engages the local community and schools.

Wilton’s began life as five houses built in the 1690's - 1 to 4 Graces Alley and 19 Wellclose Square. 1 Graces Alley was an ale house (dated from the first half of the 18th century) then in 1839 a concert room was built behind the pub and the building's life as a venue began.

A section from Horwood's 1792 map with Wilton's site circled.

John Wilton bought the business in 1850, building his first music hall in place of the previous concert room in 1853. He then replaced it with his ‘Magnificent New Music Hall’ in 1859.

The building was grade 2* listed in 1971. A first phase of essential urgent repairs was completed in 1982 when the first charitable trust, The London Music Hall Trust, was formed. The building remained empty, suffering more structural damage and decay. In 1986, The London Residual Body gave the freehold of 1-4 Graces Alley and 17 Wellclose Square (which was then rebuilt and used as Wilton’s dressing rooms and kitchen) to the London Music Hall Trust.

Although the building remained in a state of dereliction, artists began to make use of its undeniable atmosphere. The building was used for film and video shoots including Karel Reiszi’s Isadora 1968, Richard Attenborough’s Chaplin 1992  and Annie Lennox’s No More I Love You’s 1995.  In 1997 audiences were once again invited to see a performance, this time The Waste Land, performed by Fiona Shaw.

From 2004, Frances Mayhew, the Trustees and growing Wilton's team worked tirelessly to bring the building back to life, increasing audiences, creating a new artistic program and doing everything possible to stop the building falling down. In 2011 the large debt the trust had was paid off. However, with a lot of the space having been neglected over the years this also saw the start of more fundraising for a Capital Project to carry out all necessary repairs.

In September 2015, Wilton’s became structurally sound for the first time since the renovations of music hall days and after half a century of passionate campaigning. With the help of a major grant from the Heritage Lottery Fund alongside support from other generous donors, both parts of the Capital Project had successfully been completed and went on to win a RIBA London Award 2016, RIBA London Conservation Award 2016 and RIBA London Building Of The Year 2016. It has also been named ‘Highly Commended’ in the 2016 RICS Award, London, for Building Conservation; a triumph for Tim Ronalds Architects.

Fun Fact: You might recognise this beautiful building from the current BBC series Taboo featuring the equally beautiful Tom Hardy.

Now that you've heard a bit more about this legendary venue, why not see it for yourself and enjoy some food and/or drink at the fantastic Mahogany Bar or Cocktail Bar.

Next week sees the opening of the first show we have on sale with Wilton's Music Hall, Wattle & Daub Present: The Depraved Appetite of Tarrare the Freak

Get tickets from £23.00 for this gruesome operatic puppet show here!

Follow us for all the latest theatre news and special offers: