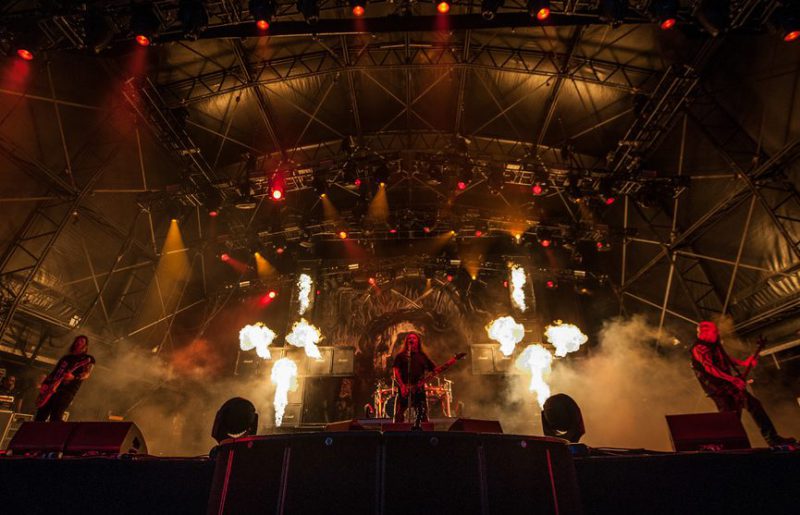 Bloodstock has acquired a loyal following from metal heads across the country - what is it that you feel brings Bloodstock Festival goers back again and again?

We really listen to what people want and do all we can to deliver a unique line up of metal acts you just wouldn’t see as a collective at another festival. We strive to keep the ticket price as low as possible without compromising on the line up or facilities. The site is great as it’s compact with a similar layout each year so everyone feels like they are coming home and know their way around.

But ultimately it’s the fans themselves that create an incredible atmosphere of camaraderie due to their like-minded love of metal.

How much influence do the fans have on what you bring to the festival each year?

They have a lot of influence. We put out an exit survey straight after the festival every year asking the fans for the good bad and the ugly and we dissect this throughout the various stages of developing the festival for the year ahead.

We also have regular facebook live Q&As with a couple of the organisers within our team, namely my brother Adam Gregory and my sister Vicky Hungerford, so people can fire out any questions about improving the site or facilities or bands etc. These have proved really helpful and we have made direct changes based on these facebook lives.

We also keep the fans in the loop by posting regular updates for them to comment on – communication is vital – it’s a two way street literally.

What new and exciting things are coming to Bloodstock this year?

Well obviously the band line up is the major draw and we have a great production coming together for the headliners on each day. We can’t say too much just yet on new features as we haven’t announced them yet so stay tuned.

What's your favourite thing about the festival aside from the music?

The people most definitely. The buzz in the arena as well as back stage is incredible, a real family gathering and for the organisers behind the scenes we are all huge metal fans doing a job we absolutely love, that feeling seems to translate across the whole site.

What advice would you give to a first-time Bloodstock attendee - what's your survival guide to the weekend?

We have loads of first time Bloodstockers each year and quite a few that come along on their own. We’d simply say pitch up and chat with your neighbouring campers to see how many times they’ve been before, it’s a great festival to make new friends.

Who has been your favourite headliner of all time at Bloodstock?

What's the most entertaining or outrageous thing you've ever seen happen at Bloodstock? Either around the site or on stage?

I remember one year seeing a lad gaffa taped precariously into his wheelchair and being crowd surfed to the front and over the pit – our Pit crew were not expecting that!

Have you ever had any peculiar rider requests?

A pigs head was on one of them – we clearly said no.

You must've seen some pretty big mosh pits since Bloodstock began - which band has caused the biggest? And which band on this year's lineup do you think could top it?

We’ve had a lot of pretty big mosh pits over the years but a couple the stand out for me are Extreme death metal band Cannibal corpse and hard core Hatebreed. For this year I really couldn’t say so you’ll just have to come and find out for yourselves.