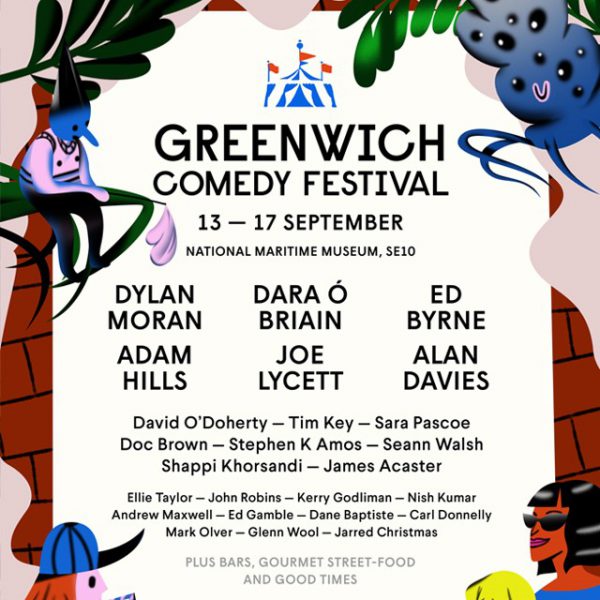 The popular comedy festival is once again returning to the National Maritime Museum in Greenwich, South-East London. This event doesn’t just offer the best in comedy, but also bars, gourmet street-food, music and so much more.

Showcasing some of the best in comedic talent around right now, we look at the top 5 acts to see this year.

‘The Last Leg’ began as a one-off show back in 2012 to run alongside the Paralympics. It proved so popular that it then became a weekly late-night talk show, and covers real issues, politics, sports and pop culture in a refreshing and humorous way. Hills is the host of the show, and his persona has only become more well-known in the UK since it began. His Australian take on Britain gives a different dimension to his comedy, and he’s set to have the audience roaring with laughter as he does every Friday night through the TV.

Another comedian from across the pond, but not as far as Adam Hills. Reginald comes from America, and the recognisable deep voice with his strong American accent makes him distinguishable among fellow funny men and women. He first came to the UK to study as a theatre student at the Royal Academy of Dramatic Art so he has plenty of training in keeping crowds entertained. He won the Writers' Guild Award for Comedy in 2006, and his popularity just keeps growing year by year.

He regularly appears on ‘8 Out of 10 Cats’, he recently presented ‘Sunday Brunch’ while host Simon Rimmer was on holiday but on top of it all, he’s just a naturally hilarious guy. His intelligent-but-not-snobby comedy is something we don’t see much of. We all sometimes get tired of the same funny stories over and over again about families and kids. But, Joe makes a joke of real-life daily occurrences that we all have to deal with. While perhaps adhering more to a younger audience, he’s funny enough to make anyone of any age laugh.

It’s always great to see a woman comedian on big stages such as this, with comedy sometimes feeling rather male-orientated. The London-born stand-up is also a writer and actor, and once worked as a tour guide, so she knows how to keep people entertained. Her jokes and timing are always so in tune with the audience that you never stop laughing while listening to her stories, and she sure does know how to work an audience.

Who knew that simply sitting with a keyboard and singing a jaunty song would have you in stitches? Not many people. But the Irish comedian does this in such a uniquely funny way that that his shows are completely original. His talents are widespread over being an author, musician, actor and playwright so the multitude of skills he possesses just add to his comedy. He doesn’t talk much without music and that’s OK because his real comedic presence lies behind the keyboard.

Tickets are on sale now!