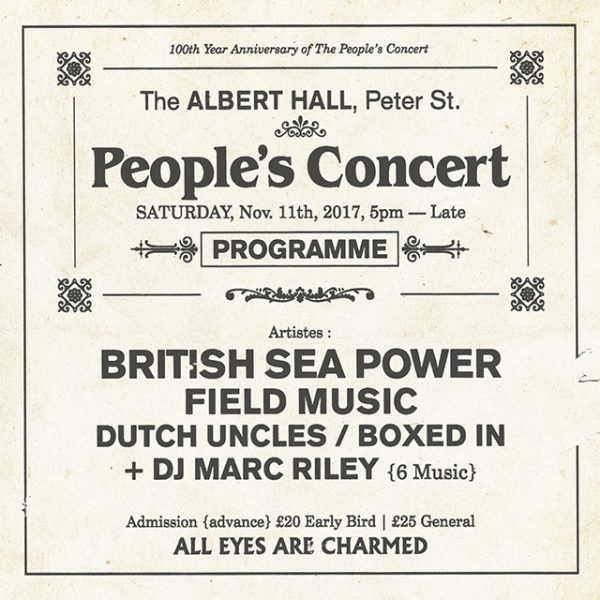 Manchester’s iconic Albert Hall has just announced the biggest in-house show it has ever hosted. Celebrating 100 years of ‘The People’s Concert’, which was originally staged in the venue, this special event pays homage to a concert that has stood the test of time. Headlining back in 1917 were ‘The Famous Range Concert Company’, and for the admission of two pennies, guests were treated to a troupe of classical singers with an accompanying orchestra and a Mr Arthur Newton who was booked as a ‘humorous entertainer.’

Fast forward 100 years and the present day acts are decidedly less classical but still just as favoured. Featuring an especially curated line-up that draws inspiration from a recently discovered programme for the original event, the night will host a mix of popular modern day artists, bands and DJs; such as British Sea Power, Field Music, Dutch Uncles, Boxed in, and Marc Riley to bring you the original concert to life through a contemporary rendition. Not only this, there will also be a twist in the mix from one of Manchester’s home grown DJ talents and some special announcements that are soon to be released!

For decades, the grandeur of Albert Hall has mesmerised both visitors and performers with some of the most talented musical maestros, such as Beck, Manic Street Preachers and Primal Scream, gracing its hallowed stage. Discovering the perfectly preserved programme only further demonstrates Albert Hall’s illustrative past and its continually-evolving journey as a venue. To commemorate, the artists playing at the concert will be invited to preserve the event by contributing memorabilia and messages to a time capsule that will be hidden deep within the inner sanctums of the Albert Hall. Although a lot may have progressed since the original ‘People’s Concert’, what evidently remains is Manchester’s love for music and admiration for The Albert Hall.

Come and celebrate 100 years of ‘The People’s Concert’ this November at one truly special event, tickets on sale now.