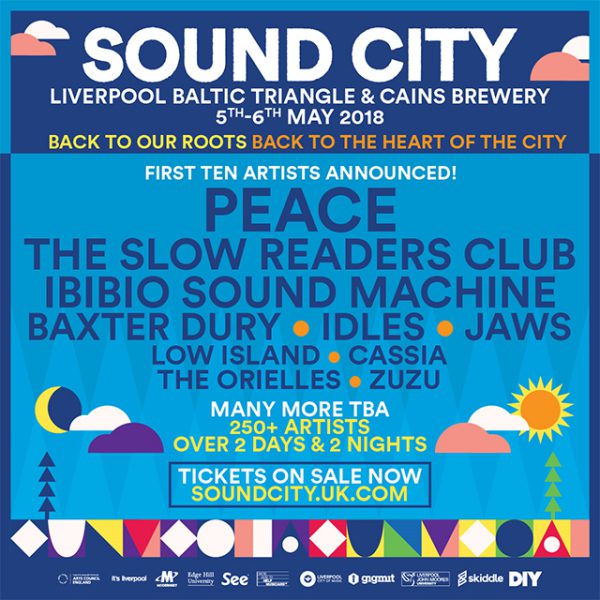 Set in the heart of Liverpool city centre, Sound City is a two day festival combining well-known and upcoming musical talent across the Baltic Triangle and Cains Brewery. The festival boasts a whole hosts of unique acts across over 20 locations - including intimate stages, pop up shows and booming warehouses; there really is something for everyone at Sound City.

We’re incredibly excited to announce the first ten artists which have been revealed for the Sound City line-up, these include: Peace, Slow Readers Club, Ibibio Sound Machine, Baxter Dury, Idles, Jaws, Low Island, Cassia, The Orielles and Zuzu; but many more are yet to be announced throughout the year!

Check out some of our favourite acts announced to appear at Liverpool Sound City so far:

Hailing from Worcester this indie four-piece have two albums to their name, ‘In Love’ and ‘Happy People’, both have which featured in the Top 20 UK Album charts. Their albums were not only commercially successful, but also critically acclaimed, with NME awarding ‘In Love’ nine out of ten stars and The Independent giving ‘Happy People’ five out of five stars. It would be unthinkable to miss these indie rockers at Sound City!

A brilliant fusion of African and electronic sounds, Ibibio Sound Machine takes its inspiration from West-African funk and modern post-punk for an eclectic, contemporary sound. Folk stories, gospel and poetry are all interwoven within Ibibo, giving them a refreshing, artistic and signature sound that nods towards an Afrobeat style. Their latest album ‘Uyai’ was heralded for its unique approach, with The Guardian giving it four out of five stars.

An upcoming indie three-piece from Macclesfield, Cassia are definitely ones to watch on the music scene this year. Having already played some great gigs, including Dot To Dot festival 2017 and Reading and Leeds 2017, and embarking on a UK tour just before Sound City, Cassia are sure to be nicely warmed up for this big weekender! Their catchy, chilled out beats will fit into Sound City perfectly and we hope the sun is shining to match their upbeat vibe.

Don't miss out on what will be a fantastic weekend in Liverpool! Tickets on sale for Liverpool Sound City now.