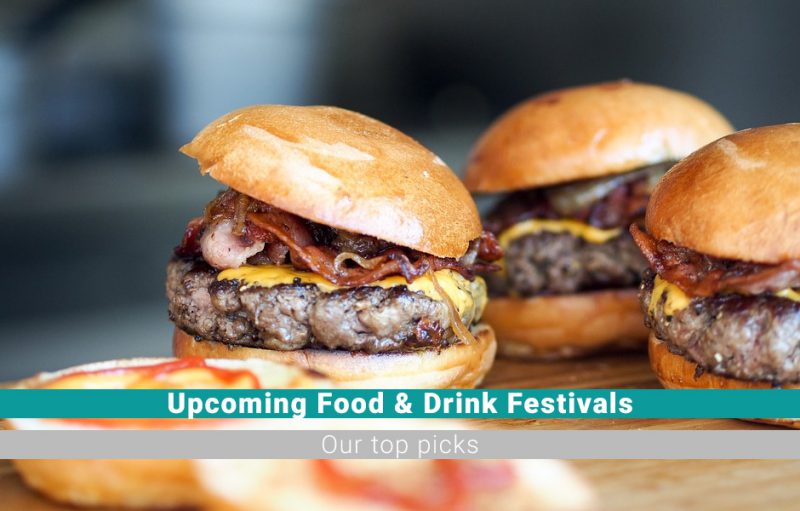 There's plenty to see and do this year, from MasterChef winner, Kenny Tutt cooking live with runner up, Nawamin, to Bake Off winner, Sophie Faldo baking a show stopping summer cake. You'll get the chance to feast on Oxford's biggest selection of street food from around the world. But it's not just about food! Enjoy champagne, gin, wine and craft beer tasting too, as well as trying cocktails at the Tikki Shack and Pimms Teapot. Kids will also get to learn to cook at the Childrens Cookery Theatre. And that's not all! There will be live music from Toploader, the Hoosiers and Dodgy!

If you'd like to have a fun day out with friends and family at the UK's biggest food festival coming to Oxford South Parks over the Bank Holiday weekend (25, 26, 27 August), get your tickets now! Perfect for any foodie, GO! Organic Festival is taking over Battersea Park, London from 8-9 September. Emily Watkins (Heston Blumenthal protégé, TV personality and Head Chef of The Kingham Plough) and Gelf Alderson (Head Chef at River Cottage), and more will be cooking up a storm in the Organic Kitchen. As well, the marvellous Melissa Hemsley will be cooking a sumptuous selection of fuss-free dishes from her new bestselling book 'Eat Happy: 30 minute Feelgood Food'.

There will also be plenty more activities to keep everyone busy. The Hoosiers and The Magic Numbers will be headlining the main stage. There will be a market place to wander round, with over 100 organic traders from groceries to cutting edge fashion. The kids won't be bored either, with childrens entertainers Mr Bloom and Andy & The Odd Socks, free funfair rides, a children’s mini farm, Stroud Brewery's organic beer festival and much more. You won't want to miss this one! The Festival of Food & Drink already has five years under its belt. But this year, it's bringing a new look and an all new celebrity chef line-up to the National Trust’s Clumber Park on Saturday 15th and Sunday 16th September. Michelin star chef Dan Doherty will make his Festival debut with Chris Bavin on the Saturday. You may recognise them from starring as judges on BBC’s Britain’s Best Home Cook alongside Mary Berry. Saturday will welcome Masterchef winner, Jane Devonshire and actress Gaynor Faye. She's best known for her roles in Coronation Street and Emmerdale, but is now a regular in the kitchen on ITV’s Lorraine.

To celebrate its sixth year, this year’s Clumber Park Festival will have a brand new Gin School. For just £10, pupils can taste seven different gins, get advice on mixers as well as a goodie bag to take home. Tickets are on sale now!

Pub in the Park Tom Kerridge’s food and music festival, Pub in the Park is coming to Knutsford! The laid-back summer celebration will offer three days of gourmet food, great music and lush vibes from 7 – 9 September. You can expect amazing grub from pop-up pubs including Tom Kerridge’s Michelin-starred The Hand & Flowers, and James Mackenzie’s Pipe & Glass, plus many more. There will be cooking demonstrations on the Chef Demo Stage from the chefs of the pubs involved at every festival. There will also be top cooking talent including Great British Bake Off 2016 Winner Candice Brown.

Bars will be serving every tipple, as well as offering masterclasses and tastings. Artisan shopping will also be available. Topping the day off will be cracking live music from household names including Tom Odell, Melanie C, Razorlight, Sophie Ellis-Bextor, Squeeze and more. Tickets are selling fast, grab them now! Now in its sixth year, Meatopia UK boasts an incredibll tasty meny, full of one-off dishes cooked over fire by some of the world's most sought-after chefs. The event continues to deliver the message of quality, sustainability and taste to the people. But 2018 promises to be even bigger and better than ever, with more delicious dishes, drink, fire and music than you can shake a fork at.

Meatopia isn't just about the fantastic food though. There will also be an eclectic line-up of live music, headline DJs, informal workshops, live chef demos from the Cutting Room stage and the return of Melissa Cole's craft beer extravaganza, Craftopia. Meatopia 2018 will be taking place at London's Tobacco Dock from Friday 31st August - Sunday 2nd September.