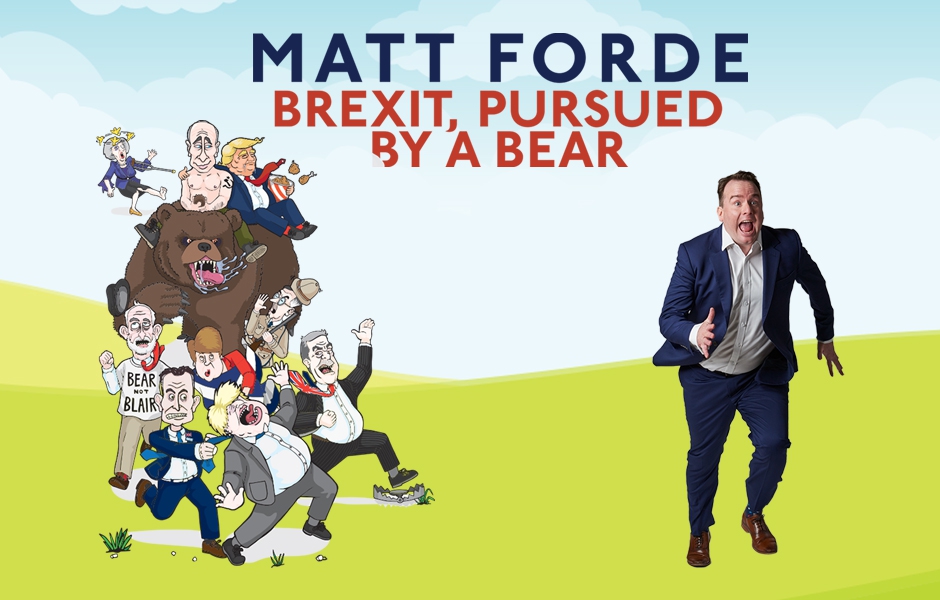 Politcal comedian Matt Forde returns with his second Brexit-themed stand up show, 'Brexit, Pursued By A Bear' in 2020. We caught up with him about leavers, remainers, David Cameron, and when he expects Brexit will finally stop making headline news.

What would you consider the most interesting political interview in your career to date?

There are so many to choose from! Tessa Jowell really stands out as someone completely different, it was a more emotional interview than I expected. Ken Clarke was on recently and as well as being a great speaker is also a Forest fan and as we know, that's what matters most in life.

What's more nerve-wracking: talking about politics on television, or to a live audience?

I love doing both (such a politician's answer). There's something special about live comedy though, there's a real connection between the audience and the comedian that you don't get through a camera lens, you can see and hear the reaction. Which isn't always a good thing.

Brexit is a divisive topic by nature; do you think that people of all political leanings will enjoy your show Brexit, Pursued By A Bear?

YES! I think every single person alive would enjoy the show. It has a target market of nearly 8 billion people.

Have there been any awkward exchanges in the audience, between Leavers and Remainers, during your time touring Brexit Through The Gift Shop and Brexit, Pursued By A Bear?

Occasionally people pipe up, but they tend to be friendly and civil. Most people can laugh at people they disagree with but they can also laugh at themselves which is a good job because at the moment all sides seem absolutely ludicrous.

Which pivotal moment of the Brexit journey so far has provided you with the most material in your stand-up shows?

If you had to put a date on when you think Brexit will no longer be headline news, when would that be?

About a million years after the next asteroid strike

How do you think David Cameron is feeling about all of this, having instigated the EU referendum?

I think he's sat there going "I can't wait to hear what material Matt Forde's doing about Brexit on his amazing tour, I'll have to go more than once, I can't get enough of the guy"

Matt Forde heads out on tour next year, kicking off in Salford on 14th January. Tickets are on sale now!