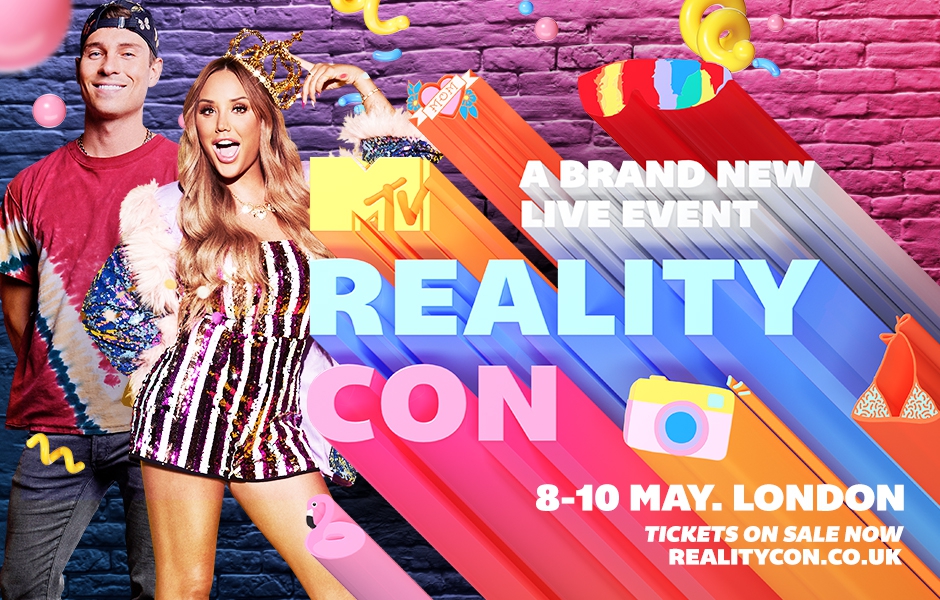 Tickets for this unmissable event are on sale now here.

We spoke to reality royalty Charlotte Crosby, star of Geordie Shore, Just Tattoo Of Us, The Charlotte Show and more, who will be starring at the event alongside TOWIE and Just Tattoo Of Us superstar Joey Essex, about all things reality TV.

Did you have any idea how much Geordie Shore would propel you into a massive celebrity?

Not a single clue back 10 years ago when we started Geordie Shore, there wasn’t a single reality TV show on air - we didn’t really know what it was about. When we were in Geordie Shore, we all asked for one day to get our phones back so that we could apply for jobs because we all thought we’d be jobless when we go out [of the house].

Going from then to now and being in the limelight, how do you stay on top of your well-being?

If I’m being honest, its just something I’ve become used to and I’ve built up a thick skin. It’s a bit of a weird one because there's all of us on Geordie Shore with really thick skin, we know we get trolled which is part-in-parcel of the job we've got and quite frankly we couldn’t care less what people think of us, so why would it ever bother us?

Sometimes I think why don't others have that mentality but I know that obviously not everyone is the same kind of person so everyone's going to take it differently because everyone feels things differently and that is the beauty of being a human being. But it's really an odd one because from being so thick skinned and from having to deal with so much, there are times that I might get a little bit upset but there's times in life where everyone gets upset. Like when you're younger and in school, when people call you names in the playground there's not much difference really, you have to face it at some point in your life, its just a bit more brutal on the TV.

Is there any advice that you wish younger you would have had or known before you entered the world of reality TV?

I don’t think so no. I think if I had any sort of advice, I wouldn’t have taken it first of all - I don’t care what anyone tells me, I’m not going to do it- but I wouldn’t want anyone to influence how I behaved and I think that Geordie Shore was one of the realist programmes at the time and that's why it did so well. Because it was so real, its help set us up for who we are today. I say this for all of us, we're all really grounded and humble because of this.

Do you think the industry has changed since you first started in terms of reality TV?

Things have definitely changed, when Geordie Shore started it was wild, people got drunk and did all kinds of things and for a while some TV shows tried to recreate that. When Love Island came back onto TV there were the odd sexual scenes but now shows are not showing those kinds of things. They'll still happen in the shows and behind the scenes, but the broadcasters choose not to show it because of the change towards people's mental health, they have to think about if you show someone in that light, how will they deal with that on the other side at the end of the show?

Why do you think reality TV lovers should go to Reality Con?

You are going to get a chance to feel like you are in that TV show, you are going to be fully immersed. You're going to smell it, you’re going to feel it and probably be touching it all over, that's how close you are! Not only to the show as a whole but to the reality stars on that show. You'll get to see them, have loads of photo opportunities, there's going to be panels and talks. It's going to be a really fun day for hardcore fans!

What are you personally looking forward to the most at Reality Con?

I’m excited to go on a panel, loads of panels. I'm going to feel like an X Factor judge! I don’t know what kind of panel it's going to be but I’m excited! Is that weird?

Do you have a reality star inspiration or hero?

I think the Kardashians are always going to be inspirations, they have made it to be the biggest reality stars in the world. Think of all the talk they have to deal with, and they are all strong and I think they are very admirable. Everything is scrutinised to a high level and they just get on with it.

You seem to be constantly working, is there a particular type of music you like to listen to on the road?

What would be your go to karaoke song?

My go to karaoke song would be Elton John, 'Your Song'. I’m really good at that one!

Do you always get recognised wherever you go and how do you cope with that?

You just can’t be in the mood where you don't want to stop for people. A lot of people do, and I don’t judge them for that, there have been times where I’ve been crying in the street and someone's asked if they can have a photo and it's not the right time. There was one time where I was in South Africa and I broke my nose and was in hospital with blood all down my face and someone asked me for a photo! So, there are times but really you can’t be rude.

Tickets for MTV's brand new Reality Con are on sale now! Make sure you grab some today here.