With International Women's Day just around the corner - taking place this year on 8th March - here at See Tickets we've taken the opportunity to speak to some of the most successful and inspiring women we know in the music industry.

Whether they're booking festivals, marketing tours, playing shows or curating events, these women have unique and valuable personal experiences in the industry.

We wanted to chat with them and hear all about it - the good, the bad and the ugly! - in order to empower and encourage other female-identifying people to get involved in music.

In the first of our International Women's Day #IWD20 series, we caught up with Rachael Greenfield and Vicky Hungerford - the sister act behind Bloodstock Festival.

From humble beginnings selling merchandise for the family-run festival, to the festival Directors they are today, Rachael and Vicky have had their own unique experiences of being a woman in music, despite their journeys through music beginning in the same way. We spoke about metal as a male-dominated genre, how it's changed over the years, and their journey to present day.

Tell us about your route into the music industry.

Rachael Greenfield: Well, it was a little unconventional, as it was actually by accident rather than design.

Our dad Paul Gregory is a Fantasy Artist and has also designed loads of original album covers since the 80s, for metal bands such as Saxon, Dio, Blind Guardian, Molly Hatchet and many more.  He started Bloodstock back in 2001 with a couple of mates and asked his good friends from the band Saxon to headline our very first Bloodstock.

Myself and my sister Vicky, literally just helped out in the first couple of years selling merchandise at the festival. As the indoor festival developed and grew, so did our roles. My dad’s business partner at the time stepped down for personal reasons, and myself, my sister Vicky, and my brother Adam literally stepped up doing everything and anything necessary to help develop the festival with no prior experience other than common sense and love of the music.

Vicky Hungerford: As Rachael said, my route in was also back in 2001 when Bloodstock first started. I was a merch girl for the festival alongside my sister - our father established Bloodstock, and Rach and I were simply selling the shirts!

I've gradually got more involved since, to being one of the festival directors today. Even though Bloodstock is much bigger now than in the early days, it's still family-run and remains "by the fans, for the fans".

What does your job role entail, day to day?

RG: It’s quite a varied role, but very much computer-based a lot of the time.

VH: I liaise with booking agents on securing bands to play, and also the management companies. Of course, I also go to lots of gigs to network, and check out possible bands for future bookings! I try to be very active in our online community as well, being in touch with our audience is important to me.

What part of your job do you enjoy the most, and why?

RG: Working over the festival weekend itself. Although I am working onsite throughout most of the build, and break in a little portacabin back stage for 7 days, watching a whole year’s hard work come together and seeing thousands of Bloodstock-ers having an amazing time means everything.  The camaraderie backstage with the crew, contractors, and volunteers is fantastic, as the team we have always go above and beyond to make the show the best it can be. It’s like a big family reunion each year and nothing is too much trouble for anyone.

VH: I enjoy the satisfaction when a band confirms after sometimes years of negotiating and trying to get them to play Bloodstock!

RG: Too many highlights, as I’m privileged to run a festival with my family which books so many incredible bands that bring me back to fan-girl mode every year!

VH: I could not pick one highlight - there are so many! I think seeing thousands of happy metal-heads smiling, headbanging, and enjoying the weekend, having the best time, will always be a major highlight for me! 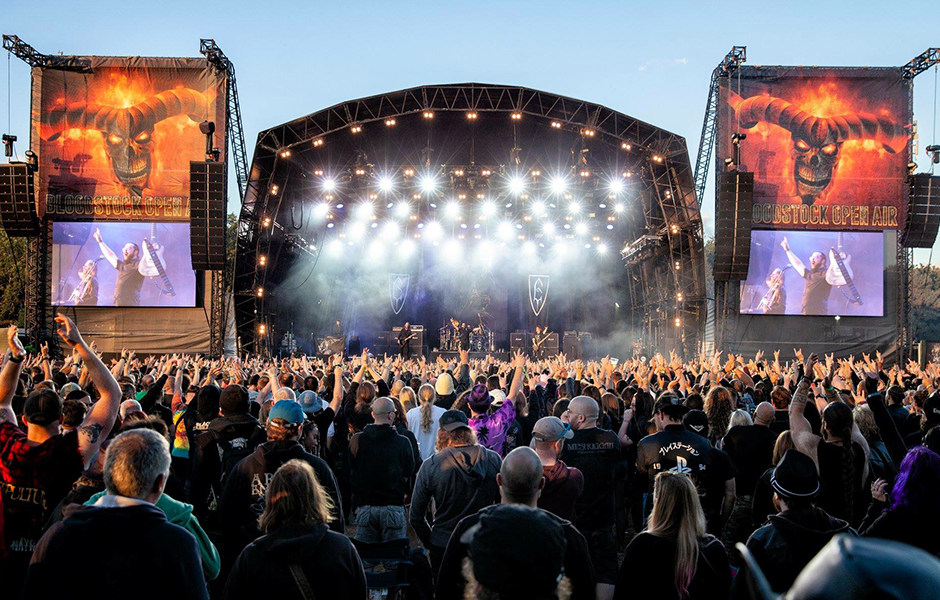 RG: Personally, I’ve not experienced any issues to date and I’ve been with the festival since day one.

VH: In the early days it was difficult being taken seriously, especially as I had no experience as a promoter, but on being a woman in the industry I never felt it affected my job.

However, I did come across sexism and some old school dinosaurs who did not like dealing with women. It isn’t something that has bothered me as I’ve always felt sorry for people who act in such a way - I also know my own worth, my morals, and that I’m good at what I do, so I don’t focus on other people.

Running a festival, is it important to you to give as much exposure to female artists as you can?

RG: My personal view is that it’s not about whether you are a male or female artist, it’s all about how good you are as a band.

We’ve had superb female fronted headline acts over the festival's duration including Nightwish, Within Temptation, Arch Enemy, and Lacuna Coil - all of which we’ve invited back more than once because they are great live acts and sell tickets. We have female fronted bands on the bill this year. Male or female fronted acts for us doesn’t come into it. If the band is metal, if they are good, and there is a demand for them, then we will book them if we can.

VH: I book bands not genders! If the bands are great, they are booked.

We have had bands with female artists play and headline the festival before and I'm sure they'll continue to do so, including some talented ladies performing this year - just as there are male! The gender of an artist has never been a consideration and never will be, I don't book anyone just because they are male or female.

Metal in particular is a heavily male-dominated genre – why do you feel that is, and do you think that is changing at all?

RG: There’s a question. I’m 46, and throughout my younger childhood I grew up with toys like My Little Pony, Barbie dolls, and had a pink bedroom - whereas, my brothers were given army tanks, Action Men, and had a blue bedroom. I suppose I was programmed from birth to like pretty, pink fluffy, cute things as were probably most girls then, and probably still are to some extent today.

Metal bands certainly didn’t fit that cute, pretty image and I think for a young woman to get into that genre many years ago would have been incredibly tough and quite isolating, in what was back then a heavily female oppressed society compared to now.

But, times have and are still changing and we have seen a considerable rise of females in metal bands over the last 20 years, which is great!

VH: In my opinion, metal was just always a guy thing, no real reason, but I know as many women in metal now as I do men, and this includes as crew!

Times have changed so, so much and happily no one's in shock any more when they hear a kick ass front woman growling deep vocals from her stomach!

In your time working as a woman in the music industry, what have you considered to be your most valuable lesson?

RG: A woman in the events industry that I learnt a lot from and have huge respect for once said to me many years ago: “fake it 'til you make it”.

That always stuck with me in the early days as there was just so much I didn’t know about the festival industry, and always worried whether I was doing the right thing, making the right choices within my role etc.

VH: Raise the bar, never let anyone drag you down to their level, show respect and morals - it goes a long way!

RG: Whatever you choose to do in the music industry, make sure you really enjoy what you do as it's often long hours and hard graft which requires serious dedication. It will feel a hell of a lot easier if you genuinely enjoy the journey.

VH: Keep at it. If you have a bad day, it’s only that. Focus on what you want to achieve and keep knocking at the door until it opens... don’t get disheartened!

What do you feel that women bring to this industry that men can’t, or haven’t?

RG: From personal experience I think it’s a level playing field for what men and women can bring to this industry, it’s about what the individual can bring - not the gender.

VH: We are pretty compassionate, we are always good listeners and resilient. And I’ve always said women handle stress and difficult situations well!

Bloodstock Festival will once again be taking over Catton Park in Derbyshire this August. Don't miss out, tickets are on sale now.