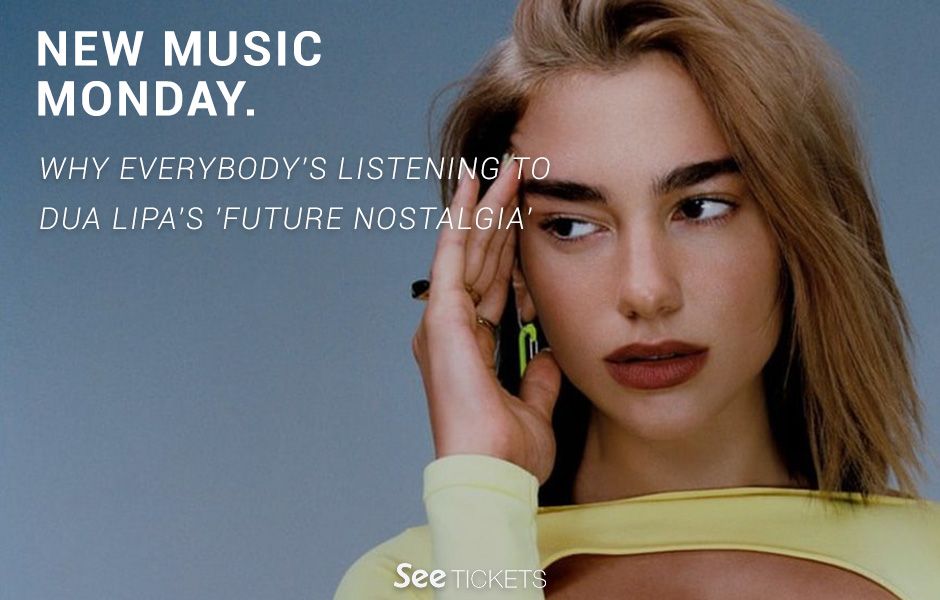 In the first article of See Tickets' new #NewMusicMonday series, we take a look at Dua Lipa's incredible second album 'Future Nostalgia' and why it's the record everybody has on repeat.

"I’m not sure if I'm even doing the right thing, but I think the thing we need the most at the moment is music, and we need joy and we need to be trying to see the light." Dua Lipa on the early release of 'Future Nostalgia', Instagram Live.

Released a week early with Dua giving a heartfelt explanation on Instagram Live, the 24-year-old pop icon surprised fans across the globe with an unexpected gift of refined, unadulterated explosion of feel-good, empowering pop laden with attitude and all wrapped up in a neon, leg-warmer clad bow; and it's safe to say it's been met with some pretty good reviews.

Leading with irresistibly catchy, dance floor-filler single 'Don't Start Now', released in November 2019, its icy, no-holds-barred lyrics to the backdrop of punchy disco was just the taste of what was to come from 'Future Nostalgia' and definitely left us hanging on for more.

With 'Don't Start Now' confirming that even greater things were yet to come from Lipa, it's no surprise that 'Future Nostalgia' has been received, with nothing short of outstanding reviews as DIY Magazine applauds "...Dua will be going down in pop history as one of the best"; securing her position as 21st century's Queen Of Pop.

That's just the start of a whole wave of similarly outstanding reviews. Whether it's praise for Dua's strong feminist stance throughout the record, such as in NME's glowing critique: "All the way through this album, the pop star is in the driving seat, both behind the scenes and in the situations she describes in the lyrics"; or for its infectious, disco-meets-pop excellence, "Lipa’s special sauce is a well-played mix of disco strings and funk bass in the vein of Chic and Donna Summer" (Rolling Stones), 'Future Nostalgia' has presented itself as a strong contender for one of the best albums of 2020.

Embarking a huge, UK arena tour starting in January 2021, we cannot wait to hear these hand-raising pop anthems bring crowds to life, and you can too with tickets for Dua Lipa's upcoming tour still available here.

Let us know what you thought of 'Future Nostalgia'.