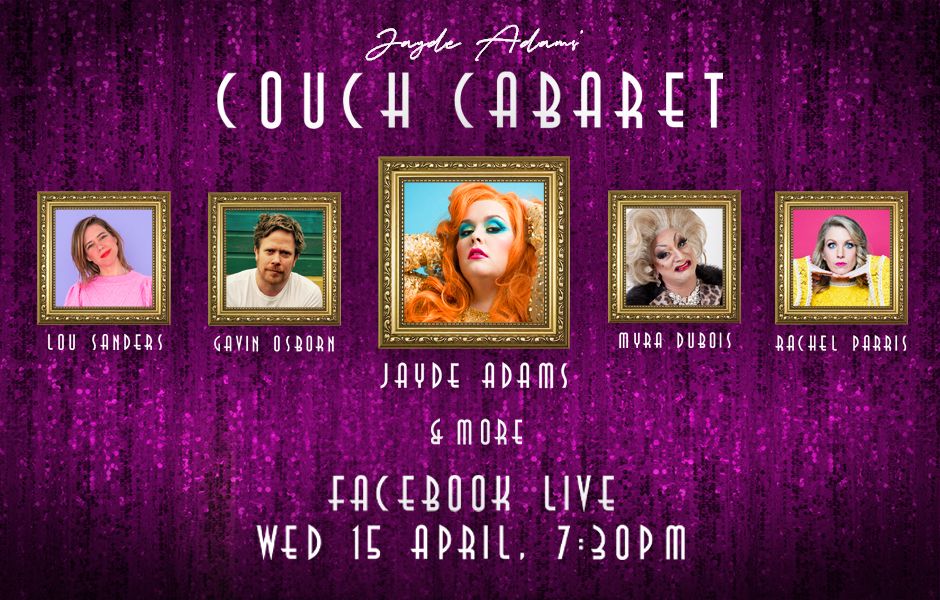 We spoke to award-winning comedian Jayde Adams in the midst of her weekly, interactive cabaret night where, in the comfort of your living room, you can enjoy Adams accompanied by her glamorous assistants and fellow comedians; plus friends from the worlds of drag, comedy, art and music to showcase their performances during lock down.

If you missed the performance on Wednesday 8 April, catch up here. And make sure you tune into Jayde's second performance live from her Facebook page here.

You've been involved in so many different projects - comedy festivals, stand-up tours, panel shows and television - what has been your favourite moment to date?

I tell you what spending a month with chefs Heston Blumenthal, Niklas Ekstedt and Carla Hall for our TV show that's going on Netflix soon. I don't know how they felt but that month we spent making Crazy Delicious was one of my favourites!

It was the perfect working environment. We all got on really well, we had dinner every night (super fun watching the hotel chef panic when Heston walked in) and they are incredibly professional. There were no weird feelings, no passive aggression, everyone was just great.

It was incredibly refreshing to be around people who were kind and professional. I was the least successful person on the hosting squad and I love that, I don't ever feel threatened by other people's success. They were a fascinating bunch of people and I learned so much.

How would you summarise your journey into comedy in one sentence?

An unconventional journey that I've always known how was going to end.

You've previously won a Funny Women award – how important is it for the industry that networks like this exist?

Very important. And what's more important is making sure these networks carry on supporting who they say they will support and not getting side-tracked. Funny Women gave me a leg up into an industry I wouldn’t have otherwise gotten into easily. I didn’t go to private school where you learn to communicate properly or grow up with money or have any relatives in the game - so it's these competitions that really give women like me a chance. I have nothing but gratitude for Funny Women.

How do you plan to recreate the glamour, glitz and energy of a cabaret night through the live stream?

I've been wearing cat suits and sequins since I was five during my childhood exploits in freestyle disco dancing, so it was a natural thing for me to bring that to stand-up comedy. For the last year I've been on tour with my show The Ballad of Kylie Jenner's Old Face to prove to the comedy industry that I don't need all that to make people laugh - simply wearing a black turtle neck or as I call it "Serious Black Jumper".  This ban came in just before I was able to put the sequins on again. Let's just say, I'm itching to get my signature stuff on. You can watch this show on Amazon Prime if you like.

Is there a suggested dress code for the home viewers on Wednesday to help get them in the mood?

Come on! Let's get dressed up all fancy. Why not...