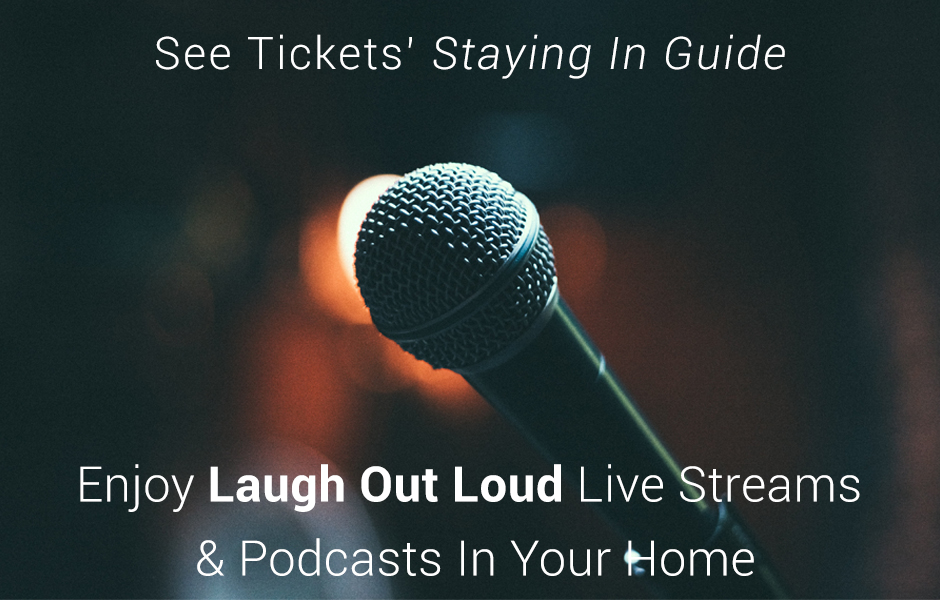 Calling all comedy fans! As part of See Tickets' Staying In Guide we've got the perfect staying in plans for you, with our round-up of top comedy podcasts and live streams to keep you giggling every night. Check them out!

Every Tuesday and Thursday from his childhood bedroom, comedian Russell Howard gives his unique perspective on current world events as he chats to some faces and interesting people whilst in lock down. Expect funny stories, upbeat conversations, intimate live performances and heart-warming updates from the heroes helping the country on the front-line. Make sure you tune into tonight's episode here.

Creator of unique panel show Taskmaster and star of The Horne Section Podcast, Alex Horne has taken the world by storm with his #hometasking which started trending on twitter within 8 hours of the first Task being released. Fans from around the globe have been flooding social media with entries, with the winner of each Task being selected by The Taskmaster himself, Greg Davies. Alex will continue to release a couple of tasks every week throughout the lock down period. Don't forget to tune into this fortnightly podcast every Wednesday here.

Starring acclaimed stand-up comedian Chris Ramsey and his wife, presenter/influencer Rosie - Shagged. Married. Annoyed is the award-winning podcast which regularly hits No. 1 on the download charts and has reached a staggering 20 million downloads worldwide to date. They'll be chatting all about life, relationships, arguments, annoyances, parenting, growing up and everything in between here.

The Political Party is Matt Forde's weekly round-up of politics and its personalities. Matt, who is a stand-up comedian, TV host and former political adviser has featured guests including Emily Thornberry, Anthony Scaramucci and Rebecca Long-Bailey to date. His podcast is being released more frequently during the quarantine and has featured experts on COVID-19. Listen every week here.

GOSSIPMONGERS. David Earl, Joe Wilkinson and Poppy Hillstead read out unsubstantiated rumours sent in by listeners. At the end of each episode they choose their favourite piece of gossip and help spread it further by getting Poppy to shout it out the window. Recent episodes have included the team receiving gossip about a top secret sausage and a light-bulb - and an old woman who enjoys washing pebbles. Find Joe and team every Monday here.

Delve into Richard Herring's Leicester Square Podcast as episodes are being released weekly. Richard chats to comedians including Tim Minchin, Sara Pascoe, Charlie Brooker and Shaun Williamson. Give it a listen here!

Award-winning and nation's favourite Grumpy Old Woman Jenny Eclair and producer and writer Judith Holder deliver the hilarious Older & Wider podcast every Friday to your front room. Offering everything menopausal, from the insightful to the down-right gossipy, this is the podcast worth getting your ears syringed for. Don't forget to tune in Friday here - you don't even need to get dressed!

Taskmaster star Phil Wang and Mash Report regular Pierre Novellie join forces to bring you hilarious conversation and funny little chunks they have found or made in this irresistibly funny podcast. Top stand-ups, great buds and lots of laughs - what more could you want? Tune in every Wednesday here.

Ever wanted to eat your dream meal? This mega-hit podcast sees comedian and good pals Ed Gamble and James Acaster invite special guests into their magical restaurant in which they can order three courses of whatever they like. Having received over 20 million downloads for its first two series, the comedians' podcast continues its reign with episodes of series 3 still released weekly. Listen here.