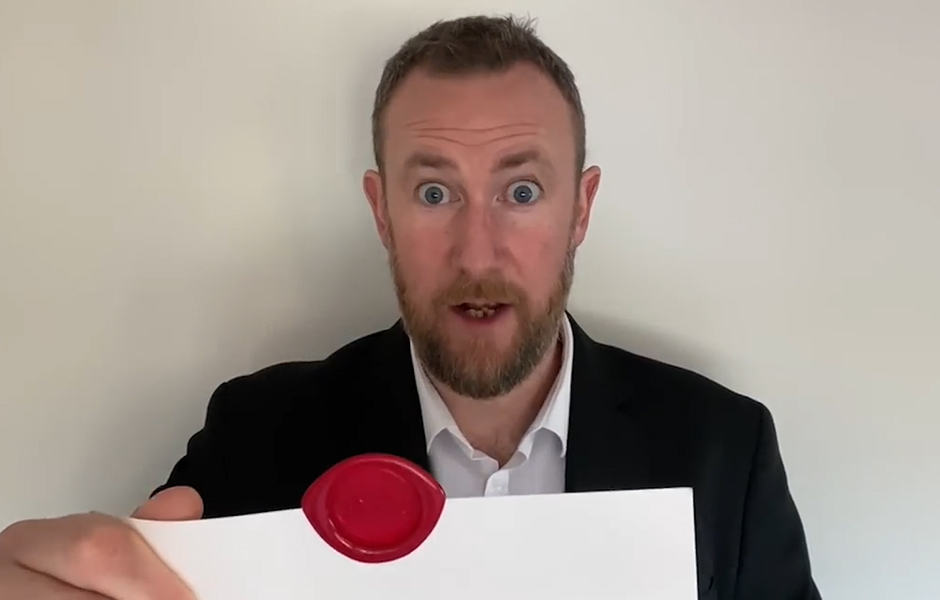 We catch up with Alex Horne, creator of TV show Taskmaster, in which he and Greg Davies set challenging and usually quite strange tasks for comedians, celebrities and special guests. During lockdown, Alex has launched #hometasking from his Twitter channel @alexhorne. This has been giving participants from around the world the chance to send in videos of themselves taking part in the tasks set by Alex each week. Winners are chosen by Greg Davies and rewarded with a place on a YouTube Taskmaster video montage. Unsurprisingly, #hometasking has gone down a storm.

Thanks for keeping us all busy and entertained with #hometasking – did you expect the huge and positive response you’ve been getting to this?

To be honest, #hometasking has been keeping me busy and entertained so I'm the one who should be saying thanks. It started as a way to keep my own kids occupied and creative, and hopefully help out a few other families who were stuck at home, but it took off pretty much immediately and I've been blown away ever since. I often set a task and think, "well, this is the one where no one takes part", but I've been surprised every time by the imagination of people cooped up in their houses. If anything, people are going to even greater lengths each time, partly in a bid to outdo themselves and each other, but mainly to have fun.

Was Greg Davies always your first choice Taskmaster, or did you ever think of taking the role yourself?

Greg was always the first and only choice. I never wanted to host the show because I have a weedy personality, hate making decisions and could never tell anyone that I either didn't or did like what they did. I'm far more comfortable in the sneaky sidekick role, grassing up the contestants and generally being Greg's lap dogs body. By contrast, Greg has natural authority, he relishes reprimanding the taskers and they genuinely yearn for his approval (although I should also say that even he sometimes struggles with handing out points as everyone taking part really does want to win and really does try their very best so it can be heartbreaking, even for a disciplinarian like former teacher Mr Davies).

Where do you get the inspiration for the tasks – some of them are pretty 'out there'?

I wish I knew. It's like writing jokes for me; you can't just sit down and do it - they come along when you least expect it and you've got to grab them when you can. If I have any sort of task-writing routine, it's going for a walk or a drive or a bath and NOT thinking about anything specific. If I let my mind wander it'll generally end up in the sort of place where odd things might happen and I then have to focus that into some sort of set up for a task. Actually, that all sounds a bit pretentious. Quite often I just look around the house, see a pepper grinder and think, maybe I'll get everyone to grind some pepper in the most interesting way.

To date, which Taskmaster task do you think has been the hardest?

In the second series the contestants walked into Chesham Town Hall to find the town's mayor sat behind his desk. The task was: "Impress this Mayor. You have twenty minutes. Your time starts now". That was tough. Even though they were all comedians (and Richard Osman), the idea of trying to please just one audience member (wearing his Mayoral chains) was horrific for them. Jon Richardson was particularly upset. So I enjoyed that one.

Who has been your favourite Taskmaster guest and why? Do you have a dream guest and a rough idea of what kind of task you'd like to see them take part in?

I couldn't say that I've got a favourite but I very much enjoy setting tasks for people who are meant to be my friends then watching them flounder. So Tim Key and Mark Watson were particular highlights for me, especially when they were cross with me. But being able to work with legends like Bob Mortimer, Mel Giedroyc, Noel Fielding and many many more is always extraordinary and mainly, very fun.

You've been featured on The Chase twice, how were your nerves when going up against the Chasers?

Genuinely, it felt like bungy jumping. You know that a lot of people are going to watch you either make a fool of yourself or look like a smug prat, so it's not an easy thing to get right. And I haven't yet got it right. I've been on twice and lost twice so I'm determined to make it third time lucky. If I do get the call again, though, I will be dreading it with my whole body.