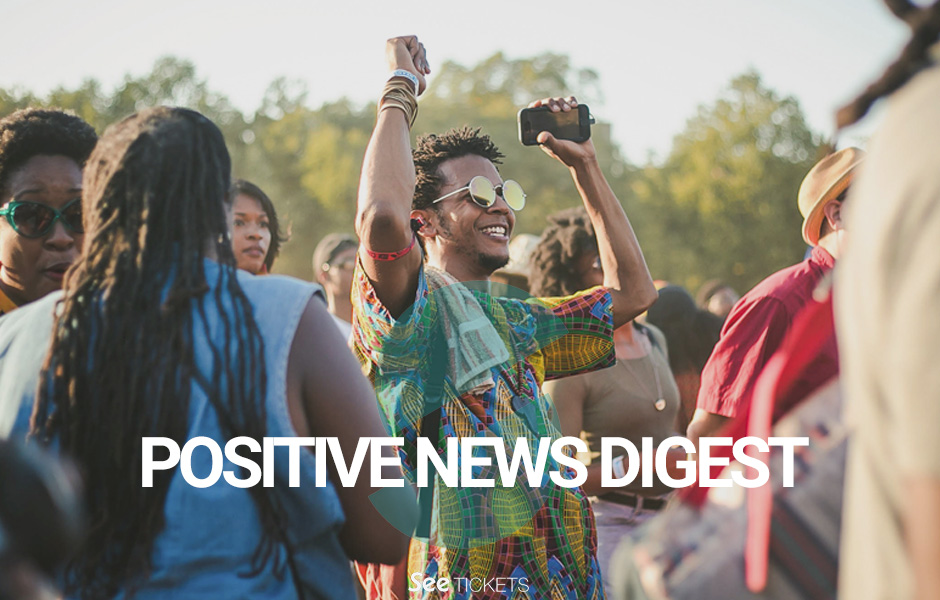 We know it's tough right now to stay positive. But we're here to let you know that it's not all doom and gloom. Keep your chin up, and find solace in music and the arts. So, each week, we will bring you our favourite positive music news stories from around the world. We hope it brings a smile to your face. Enjoy!

On Tuesday 2nd June, the music industry shut down to show solidarity with protesters calling for justice in the case of George Floyd. The official website was set up by Atlantic senior director of marketing Jamila Thomas and Brianna Agyemang. Black Out Tuesday was designated as “a day to disconnect from work and reconnect with our community".

“Yesterday was a strong start to the change we want to make in the industry,” said Agyemang in a statement. “We are taking all thoughts and ideas that were gathered and we will be implementing them into Phase 2 of this movement. Next steps are about clarifying needs and mobilizing the people to be the change we wish to see. The goal is to tap into the community at large to create change that is impactful and long lasting.”

The rock 'n' roll icon has donated his 1996 MTV award to the Eat Well MCR fundraiser. The award, which was won for best song, has already reached the £40,000 mark over on the auction website.  Along with the MTV award, there are also other winnings up for grabs, including 'a pint, or two', down the (virtual) pub with Elbow frontman Guy Garvey.

The BBC will broadcast the first performances from The Royal Opera House since lockdown this month. The BBC's 'Culture in Quarantine' feature has been extended, with a range of musical performances being released online.

The concert, taking place on 13 June, will take place without a live audience and will be hosted by the venue's director of music Antonio Pappano. It will also feature a dance premiere by Wayne McGregor, resident choreographer of the Royal Ballet, as well as music by Britten, Handel and Butterworth.

The Guardian counts down the UK's 100 greatest No 1 singles

In need of a little distraction? The Guardian's music desk have counted down their personal favourite UK number 1 singles, including songs by Lorde, Nancy Sinatra, Donna Summer and Rick Astley. Read the full article here

NY Times reports on the surprisingly popular new place to rave...your car.  In Germany, nightclubs are expected to stay shut until 2021, so German club 'Index' have found another way to host a party. The events have been a success, bringing people and music together in a safe space. You can read more about them here.

A brand-new immersive music event and venue, One Night Records, launches this October 2020 at a secret London Bridge location. The exciting new live event, the first of its kind to be designed as a social distanced experience, will offer guests the chance to spend a unique night out together with a group of friends or family in a specially designed safe environment.

One Night Records is an immersive gig, transporting the audience back to six ground-breaking concert experiences, featuring songs from music’s great, alongside original material performed by a rotating roster of exceptional new talent. Grab your tickets now.