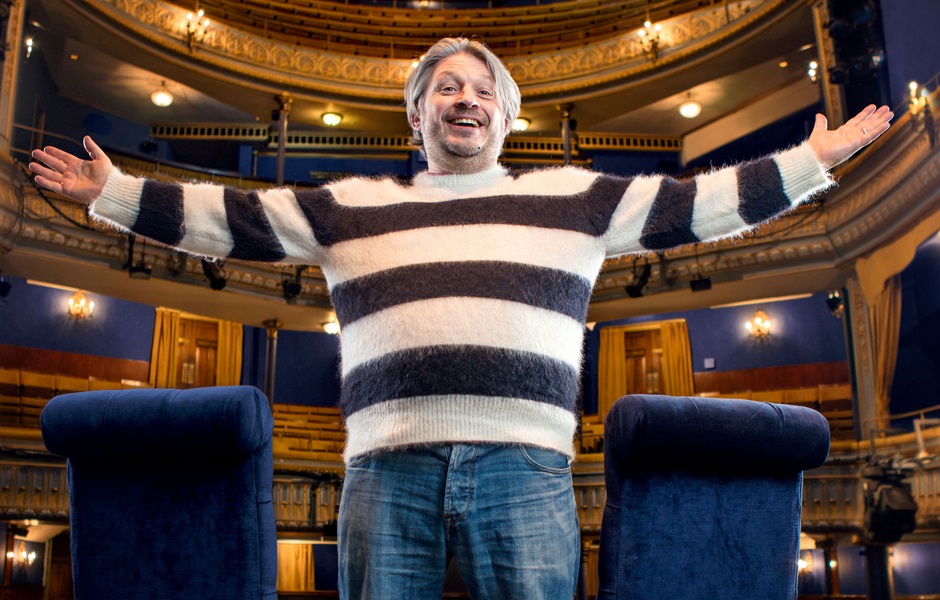 The English stand up comedian and pioneer of comedy podcasting, Richard Herring, usually records his interview podcast 'RHLSTP' at London's Leicester Square Theatre. Due to the current situation, he can't do that right now, so we had a chat with him about lockdown life, his favourite podcast guests and more...

The podcast, while maintaining its comedy roots, has been known to be quite revealing and emotional for some of your guests. Do you feel like this is an important balance to strike in all of your interviews, or does it simply happen naturally and often accidentally?

When I started I think I assumed I was going for maximum laughs, but the longevity of the format is down to its adaptability and the way it tends to morph around the guest. So if the guest wants to be more serious or revealing then it certainly works. I think the fact that it’s not something I am actively trying to make happen means they are more comfortable to do it.

I am not looking for exclusives or tears, but the guests know they can trust me and that nothing will be taken out of context so if they want to get something off their chest, this is the best place to do it. I am very honest in my own stories which I think encourages it too, and it’s difficult to sustain an hour or more of solid laughs (though people like Greg Davies and Bob Mortimer have managed it) so it’s nice to get into stuff with a bit more meat to it. But it’s an improvised chat and I don’t really make many plans for where things will go.

Sometimes I will try to derail it all to see if we can get it back on track. I am generally quite good at understanding when people do and don’t want to talk about stuff, but people like it when I get the mood wrong too so you can’t really lose.

How does touring RHLSTP nationally bring a new dynamic to the podcast, rather than continuing to perform it in its native home of Leicester Square Theatre?

It seems to work well wherever we do it. I did a gig at the Henley Festival and hardly anyone showed up and we could hear an orchestra playing loudly next door, but ultimately at its best the guest and I sort of forget the audience is there and it becomes a chat. It’s great to have a crowd to play off for the comedy though. The Leicester Square Theatre is a perfect venue for it, but the tour showed that it works in venues big and small (we had about 1,300 people in in Glasgow).

On your blog 'Warming Up', you have published an article a day for over 17 years, with over 6,000 consecutive entries. What motivates you to continue this? How do you manage to keep it up?

I am very persistent. It’s my main personality trait. If I decide to do something (usually stupid, like clear a field of stones or spot number plates in numerical order) I will do my best to do it. So once I’d set myself the task of writing something for every day and done that for a few months it was very hard to decide to just stop.

And now it’s gone on for so long and I’ve managed to still do it however busy I am or whatever troubles I have had to deal with, so it will take something quite serious to finish it I think. It’s a useful discipline and I’ve got lots of great material out of it and it’s also archived in the British Library and is a nice snapshot of a big chunk of someone’s life which might be interesting for future historians.

Sometimes it is a pain in the arse and my life is pretty dull so it’s hard to think of something to write about, but that’s the point really. It’s about looking for something small and giving myself the freedom to fail. And consequently I have come up with some comedy ideas that would not have occurred to me.

You've worked with so many talented comedians during your career - is there anyone on the comedy scene you haven't worked with yet but would like to in the future?

I recently interviewed Michael Palin who was possibly the person I had most wanted to work with/chat with. I’d still love to have Billy Connolly on the show. I always wanted to write a film for Bill Murray. There are dozens of super huge celebs that I’d love to have on RHLSTP and getting Palin on makes me think that anything is possible. I would have loved to work with Rik Mayall. I was writing an episode of Man Down that featured him quite heavily on the week that he died. So it doesn’t always come off.

Are you continuing to record interviews in lockdown, and if so how has this changed the dynamic of the podcast?

We are. Every Wednesday night on my Twitch channel which are then released as podcasts a few weeks later. It’s working well and though it lacks the additional dynamic of the audience (which tends to spur on the comedy) it has an increased intimacy which I think has led to some interesting chats and revelations. And I can reach acts that are not in the country or who would usually be busy. I am interviewing Bill Burr in LA this week.

Plus I can go downstairs and go straight to bed afterwards. I think we will carry it on post lockdown, though I am very much looking forward to getting back into the theatre. We had to cancel some shows with amazing guests. It’s nice to know that this is an option though.