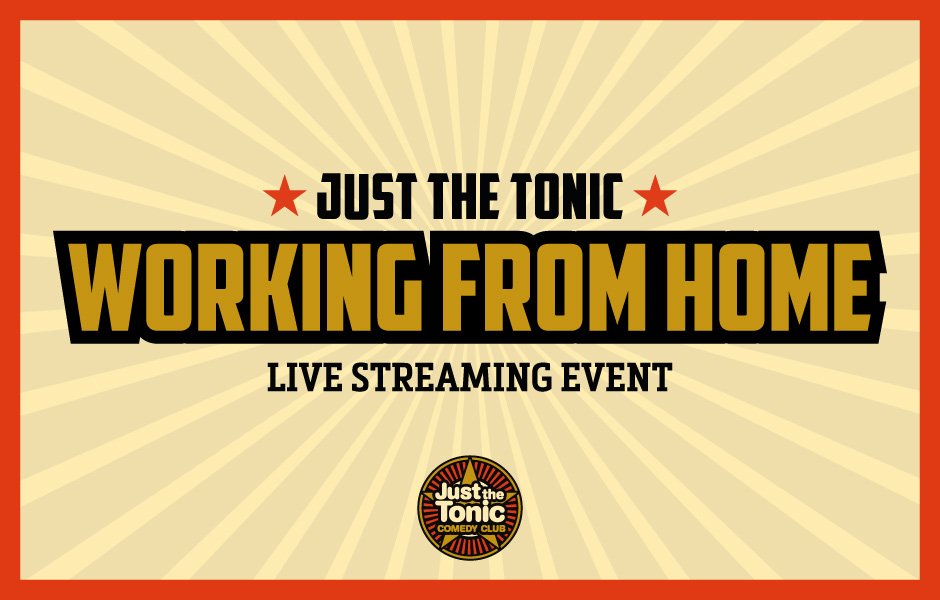 Just the Tonic is bringing live streamed comedy events to us every two weeks during the current crisis to give everyone a well needed laugh. The ‘Working from Home’ series has so far hosted acts including Jon Richardson, Jason Manford, Al Murray, Kerry Godliman, Johnny Vegas, Tom Stade, Matthew Horne, Tom Binns, Susan McCabe, Seann  Walsh, Paul McCaffrey and Matt Forde (and there has only been 3 of them).

We talk to Just the Tonic founder Darrell Martin to find out more.

The live stream events aren’t meant to replicate a stand-up show (which understandably need a crowd to work), so what can we expect from these events?

I’ve sat back and tried to work out what elements of comedy can work without the format offered by a live gig, but that can be achieved online. So, we chop the show up a little. Sketches, bits of chat, bits of stand up, bits of stand up discussed as chats / phone calls / sketches. We have a number of repeating characters, including Matthew Horne as Paul Human: Patron to the Arts. It is just a lot of silliness, put together from my spare room. Do not expect Live at The Apollo (personally, I prefer it).

You’re a few weeks into the ‘Working from Home’ series which has all had to come together quite quickly, what’s the feedback been from the comedians and ticket bookers?

The comedians really like it. I allow them to think up ways to best present themselves. So, in that way, there is no rigid format. They also like the fact that it is pretty relaxed in its nature and low pressure. We all have a chat during the show, and it allows for some unplanned banter. I guess it gives them a bit of a feel of the green room again.

The audience response has mainly been fantastic. Especially after the last one. As we are learning from each show the whole thing is getting better. So, we have had some people thanking us for being the funniest thing during lockdown, or for giving them a feel of a real and raw Saturday night out. Etc.

Of course, it is not all good. We get some people saying ‘I expected it to be…blah blah blah. I wanted to see blah blah blah…. But, whoever you put on for a gig you get complaints. I have had live events where you see 500 people leave after laughing their heads off and you think ‘what a great night we’ve all had’. In the morning you wake up to 2 or 3 grumpy emails saying things like ‘It wasn’t funny at all’. And you have to wonder if they were actually in the same room as the 500 people laughing their heads off. What were they thinking as they looked left and right… were they thinking ‘what is that strange sound coming from those heads?’

So, to get people bothering to email in with loads of positive feedback means we must be doing something right. Just ignore the moaners. You can’t please everyone. And if you try it will just be shit.

You’re the host of the live stream nights (and the founder of Just the Tonic which people up and down the country will be familiar with) – do you think there’s a market for live stream comedy to continue even when clubs are open again? Would you want it to continue?

I think there might be. But not on a Saturday night. People will still be going out. I will try and carry it on. Then again, maybe all those people that can now watch that have young kids etc and can’t get out. I will definitely try and carry it on. I think the pandemic has broken the system and it will come back into place but we will have all got used to doing different things, which may just become acceptable and normal.

Can you give us a brief history of your journey into comedy, how Just the Tonic came out and the events that you do at Edinburgh Fringe?

I loved comedy, and found myself unemployable in the early 90’s recession. One of my jobs was at Venus Nightclub in Nottingham. After that closed I went and taught in Spain for a year and came back to open a comedy club. I didn’t know what I was doing but I was determined. I had £300 and lived in a squat. I bumped into the old promoter of Venus, James Bailey. We hatched a plan. After 3 weeks of losing money he bailed out. I took it over and basically loved it so much that I was determined to make it happen. It would involve me flyering round all the pubs Thursday / Friday / Saturday nights for the Sunday events. It just grew and without knowing how, I created a brilliant underground comedy club.

I then started doing gigs, which took me to Edinburgh as part of a show called Big Value Shows (I was on the same year as Mickey Flanagan… where is he now?) in 1999. I also supported Johnny Vegas on tour that year, then supported Ed Byrne in the autumn.

I was asked to produce Big Value a couple of years later, then to run the venue, then it all sort of grew. There has been no plan. It has all been on a whim, living by your wits and making the most of an opportunity.

So, I guess, this streaming is a continuation of that approach. It is not as though I had planned for a pandemic. But when it happened and I had to cancel 6 shows a weekend for 6 months, plus 180 shows booked for Edfringe, I had to get my thinking hat on.

I thought… no one will just watch me… so I need to book the big acts. No big acts want to play for free on Youtube, so I have to sell tickets, I can’t sell tickets on Facebook and Youtube (and they are a bit crap) so I hunted out a solution. The solution also allows me to play music *which is not possible on Facebook and Youtube). It also means I can livestream it, and then make it disappear forever.

Although, I have recorded each one, so if there is enough interest we might be able to repeat some of them. All depends on the acts and agents because I was not cut throat or ruthless and did not demand any rights. I just wanted to put the shows on, have a laugh, make people laugh and keep myself and some comedians in a bit of work. Seems to be doing OK and it is getting better each time.