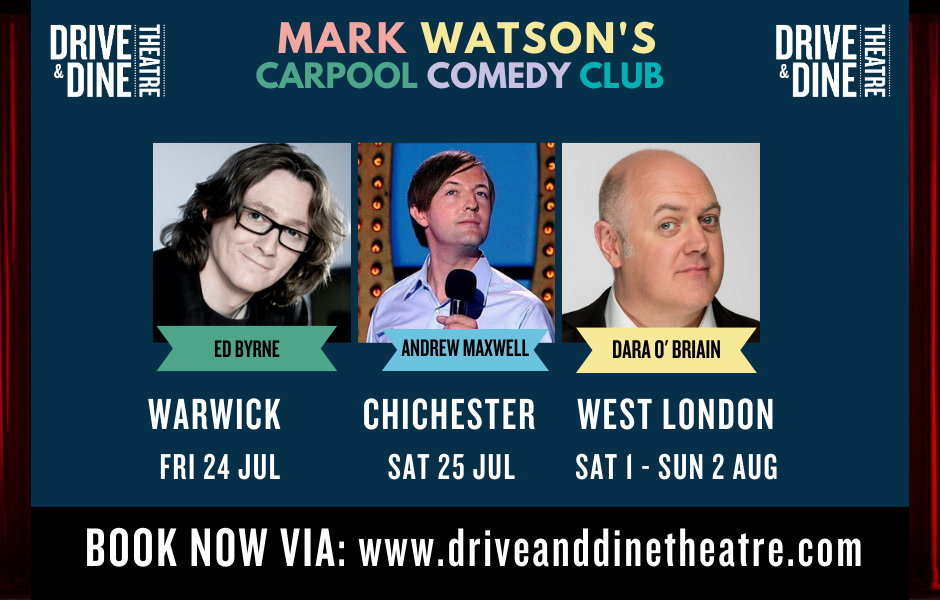 Mark Watson will host the first ever Carpool Comedy Club, drive-in comedy events taking place as part of the wider Drive and Dine Theatre series running though July and August.

We caught up with Mark himself about the experience of hosting Carpool Comedy Club and the life lessons learned in lockdown.

You have started your run of Carpool Comedy Club events now. Has the material and preparation process had to be different because you’re in a drive-in format rather than a ‘traditional’ venue?

It's funny - in some ways the whole experience is completely different, yet in the end it's reassuringly familiar. The preparation obviously feels a million miles away from being backstage in a plush theatre somewhere, because you're in a sort of gazebo looking out at an audience which seems to be completely made up of cars instead of humans.

And your material does need a bit of thinking about, because it's difficult NOT to acknowledge the fact that we've all lived through a period unlike any other in our lives. (And on top of all this, of course, none of us have even done a proper gig since the middle of March, so the feeling of rustiness is intense.) Yet, when you get up there, it's surprising how quickly it feels normal again. All the comics so far have loved feeling like a performer again.

How do you gauge audience reaction in the drive-in format? Does this pose any challenges for you as a comedian or are you relishing the challenge of doing something totally different?

It certainly is a major challenge. The main way for the audience to express approval is by honking car horns, and the noise of 300 people doing that is significantly different and more stressful from the sound of laughter!

But on warmer nights, people have been winding down their windows or even getting out of the cars and sitting on folding chairs, and that really helps. On the whole it's been a lot of fun learning how to handle this new way of doing this, even though you probably wouldn't want it to replace theatre shows altogether...

You have handpicked the other comedians on the Carpool Comedy bill (who include Daliso Chaponda, Ed Byrne and Jen Brister). What are you hoping they will bring to the events (aside from laughs)?

We've got a great blend of comedians; I'm genuinely delighted with the line-ups. Because it's my name on the posters and this is my company's initiative, I've only picked people I think are great (cancelling all the other shows in the country has been a long-winded way of avoiding comedians I hate, but effective). Having three comics on the bill each time - alongside me - means there's a real variety every night, something to appeal to everyone.

How did the recent 24 hour online show ‘The Watsonathon’ go (available to view here) and can you tell us about your involvement in Heckle the Virus?

The online marathon show was another huge challenge (it's fair to say this period has thrown up quite a few challenges for a live entertainer) but something I was really proud of. It's difficult to describe what it was like, but I don't think anyone had seen anything quite like it before; we had a load of fantastic people involved and raised a large sum of money.

As you say, a chunk of that money went to Heckle The Virus, which is an emergency fund set up to support the many comedians out of work in all this mayhem. I wanted the event to help the industry as a whole, but we also gave money to two non-comic charities. I'm hoping to do another one at some point...

Finally, have you learnt any life lessons during lockdown? Or made any pledges to yourself about things you’ll do more of going forward?

I think one important thing I've learned has been the importance of good relationships and friendships throughout life. Like a lot of people, I've made more of an effort with friends and family than I ever would have done before, because you realise how crucial company is and how short and frail human lives are.

So that's something I'll be taking forward. My partner and I have also got massively into orange wine. I guess that will continue, too, but that one's a slightly more expensive life lesson.

Tickets for Mark Watson’s Carpool Comedy Club are on sale now as part of the Drive and Dine Theatre series of events.