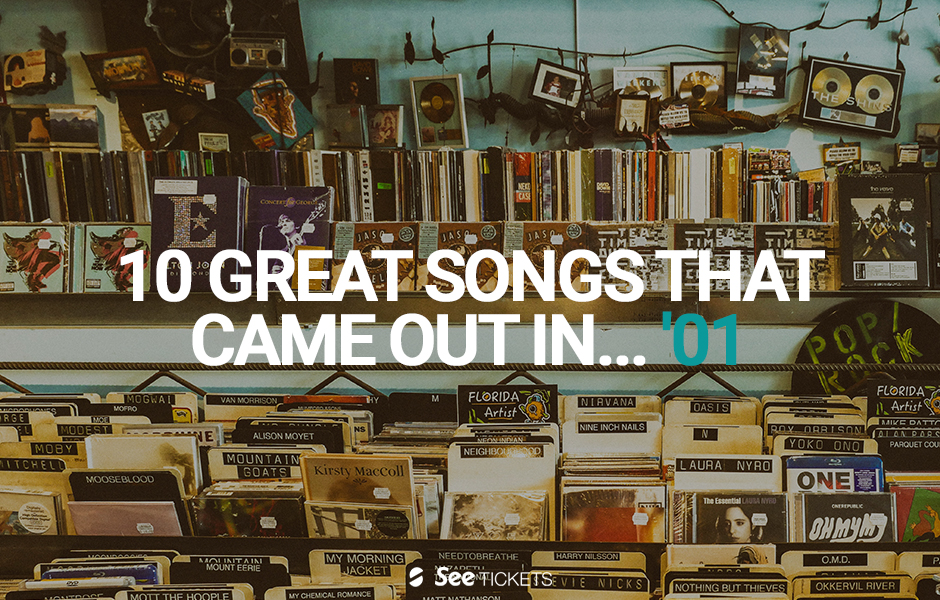 In this blog series we'll be going back in time and looking at great songs that came out during a particular year. This time we are looking at the year 2001 which was a real mixture of music genres, from pop to metal and everything in between. Below are our picks of some of the best songs from that year.

Missy Elliott - Get Ur Freak On

'Get Ur Freak On' went on to become Missy Elliott's first top ten solo single and the song was also used as the soundtrack for Lara Croft: Tomb Raider starring Angelina Jolie.

You know that hook, the one we've all tried to sing ourselves a million times and failed miserably? Well, it won countless Grammy awards when it came out and was even named the 29th most successful song of the 2000's!

Clint Eastwood was the first song released by virtual band Gorillaz, who were created in 1998 by singer-songwriter and Blur front-man Damon Albarn. The band consists of four animated members, presented in music videos as cartoon characters, however in reality, the only permanent musical contributor is Albarn.

'I'm a Slave 4 U' was taken from Britney's third studio album, 'Britney', and the song went onto place within the top ten of almost every country it charted in. Not forgetting her VMA performance of the song, which is considered one of the most signature performances to have ever taken place at the music awards.

Taken from the band's debut album 'Is This It', 'Last Nite' has been featured on countless lists, with NME magazine placing the song at number nine in its list of the 50 Greatest Indie Anthems Ever! Fun fact: Julian Casablancas told producer Gordon Raphael he wanted the song to sound "like a band from the past that took a time-trip into the future."

This was the first song released in the English language by the Colombian singer-songwriter.  The singer didn't know the language yet when she started working on the album and was assigned an English tutor.

Charting at number four in the UK charts, 'Let Me Blow Your Mind' went on to win a Grammy for 'Best Rap/Sung Collaboration' and the 2001 MTV Video Music Award for Best Female Video. After the success of the song featuring the female duo, Eve returned the favour by appearing on Gwen Stefani's song 'Rich Girl'.

System Of A Down - Chop Suey!

Not only was it one of the biggest hits of the 2000's, this song is still to do this day a power anthem for women worldwide. The song was used as the lead single for both the Charlie's Angels soundtrack and shortly before it was released, Destiny's Child went from four members to the trio of Kelly Rowland, Beyoncé and Michelle Williams.

P!nk - Get the Party Started

'Get The Party Started', was written by 4 Non Blondes frontwoman Linda Perry and went on to be P!nk's biggest selling song of the time!

Feeling nostalgic? Read our previous blog where we take a look at ten great songs that came out in 1989 and 1996.