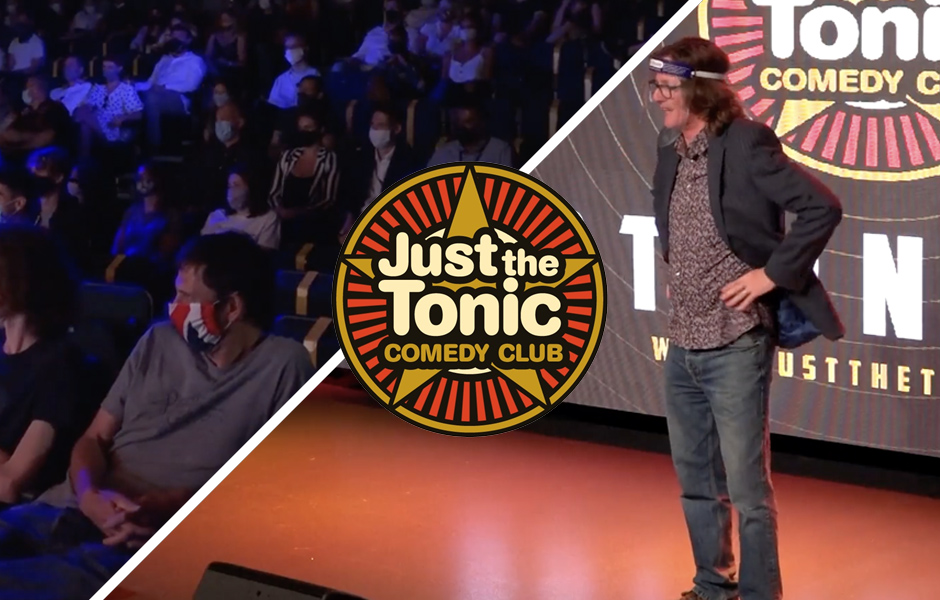 Ahead of the relaunch of the Just The Tonic live shows this autumn, we caught up with founder Darrell Martin. We spoke all about the comedy club’s legacy, lockdown events and bringing live comedy back in 2020!

I think we can all agree that there have been far too few events in 2020.

The world is beginning to take baby steps back to normality. There are signs appearing more frequently that events will be back before we know it. With the rise in outdoor, drive-in and live streamed events over the past few months, the UK has enjoyed fleeting experiences of live entertainment. At the same time, the nation has collectively looked forward to when we can next return to the venues we love, to see it in the flesh. Music, exhibitions, theatre… and of course, comedy.

Recently there’s been a number of events – both online, and in certain live settings – popping up to offer laughs and light relief. Notably, there have been some special performances provided by the team at everyone’s favourite comedy club, Just The Tonic.

Just The Tonic has been a much loved staple of the UK comedy scene since 1994. From humble and ambitious beginnings in Nottingham, the comedy club has expanded immensely over the past 26 years. It now also showcases the best in up-and-coming and mid-weight comedy in Birmingham, Leicester, Leamington Spa, Reading and Watford, while also being a regular feature at the Edinburgh Festival Fringe.

The brains behind the comedy club, Darrell Martin, has been at the centre of it all since its inception. Having experienced performing as a comedian himself (Martin was a finalist in the 1997 Daily Telegraph Awards), his ambition was to bring more comedy to the city of Nottingham in a time where a conventional career seemed somewhat difficult.

“There was something of a recession in the early 90s and getting a job was a bit tricky. So, I just thought I would start a comedy club. And once I got it going and realised I could possibly make a living out of something I love, I couldn’t really go back to trying to get jobs.

“I can’t say I really had a ‘goal’”, he told us. “I just liked comedy and there wasn’t any in Nottingham.”

Since then, Just The Tonic has played host to, what are now, some of the biggest and most loved comedians in the world. Ricky Gervais performed his first show on the Just The Tonic stage in 1999. The likes of Jimmy Carr, Stewart Lee, and Russell Brand have sung the praises of the club. Long-time supporter Johnny Vegas gave it the title of “the best comedy club in the country”. So, it begs the question: is there something special about the club, that gives such huge talent a platform to hone their craft in the early days of their career?

“It is hard to say, because I don’t really have a format,” says Martin, of the venue’s ability to nurture talent. “It might be that if I think someone is funny, I will just book them and let them do what they want. I trust the funny people to be funny, and often this is not always the what the public might think is funny… at first.

“For example, if someone was to describe Ross Noble to someone else 20 years ago, it probably would not sound great. But I loved what he was doing and would let him come and compere and let him just do whatever he wanted for as long as he wanted. Same with Johnny Vegas and Daniel Kitson.

“I think if a comedian knows that the booker or promoter actually loves the fun of it all, rather than just the money, and that if they fail, they will still get booked, then it is liberating. We used to book Eric Lampaert as a regular compere. One night, in the Forum in Nottingham he had a real stinker of a gig.

“He apologised, and I said “I don’t give a sh*t, I know you are funny. Don’t worry, I don’t care what they thought tonight”. I don’t actually remember the incident. But he told me years later that knowing that took the pressure off him and it freed him up in future.”

While the club has achieved so much and entertained so many crowds since its opening, things haven’t always been easy. Martin recognises the challenges that Just The Tonic has faced over the last 26 years.

“For years I was a happy-go-lucky, naïve, young promoter that was happy bobbing along doing Sunday nights in Nottingham. But, as time went on, and people started making money, the chains came along.

“They do their best to strangle out the independent operators. Also, theatres have now started seeing comedy as an easy income. So, where I used to get mid-sized acts touring with us, they will often go to the Playhouse now. But, things move and you just have to try and keep up with the times, or ahead of the times”

It’s that determination to keep ahead of the curve, a belief in the comedians, and an eye for the funniest material that seems to be the key to Just The Tonic’s stellar line-ups and high praise among peers in the comedy scene. As a regular fixture at the Edinburgh Festival Fringe too, Just The Tonic earns this reputation as a part of the world’s largest arts festival, bringing some of the finest talent each year. Over 20 years since Just The Tonic first appeared at the festival, the Fringe seems to still be a place where Just The Tonic can help breakout stars find their groove and those vital early audiences.

“The festival itself is really important for acts as producers, bookers, TV people go there from all over the world. So as a career launcher, it is vital” Martin admits.

“I think the most important purpose it serves is that it gives the comedic talent a target/deadline to come up with new ideas. Each year people will try and take a new hour up. That deadline is a driving force. I know that at school, if there wasn’t an exam at the end, then I wouldn’t have learnt anything. For a lot of comedians, the Edfringe is like an exam… and a reason to get cramming and writing.”

It would be safe to assume that during the lockdown period of this year, comedians have had an unusual amount of time to sit, write and reflect on material that they would ordinarily be showcasing on the road, or at this year’s Fringe. But where have they been able to perform it? In lieu of live shows, Martin has been filling the gaps in the live calendar. In a series of live streams, Just The Tonic has hosted comedians such as long-time collaborator Johnny Vegas. It’s been a challenge, but one that he has relished being a part of.

“I absolutely loved it. Once I got over the mental hurdle of feeling absolutely redundant, which happened when I accepted it was all out of my control, I was able to try and work out how to do something different.

“I then had to research how to stream things outside of YouTube/Facebook and have them protected behind a paywall. Then had learn how to produce and host a show from my front room. It was brilliant fun. We had some really stupid events. All live, all a bit dodgy, things going wrong because it was all so new to everyone. Organising was pretty similar to a live gig, except for the actual event. Because we were all in lockdown and I had to co-ordinate all acts, host the show, live mix it all, and do all the streaming… It was really stressful, but it was really good fun.”

Restrictions have continued to ease, and more opportunities for live events have presented themselves. So, Just The Tonic turned to hosting some outdoor shows just outside of Nottingham. As is to be expected (a difficulty that festivals in the UK face every year), Great British weather can be unpredictable. That was just one of the hurdles Martin had to bear in mind. Regardless, the events were a success with acts and audiences alike.

“I wasn’t actually at the first two [shows], I was away. I know that the acts absolutely loved the chance to be in front of an audience again. The feedback we got from the audience was really positive. I made it to the Saturday with Jimmy Carr. It was good, but I don’t think you can beat being indoors in a small venue. People liked it… but it was outdoors, it was cold, and a bit overcast”, Martin admitted. “Good show though.”

So as we move forward, to a time where live events will begin to take place and we can once again be inside venues watching our favourite forms of entertainment, the future looks bright for Just The Tonic. The club is pleased to announce that they will be relaunching events in autumn 2020. The shows will be fully compliant with COVID-19 guidelines, taking place in a safe environment for staff, customers and performers. Martin is confident and excited for what’s to come.

“The future is good, to be honest. We will have to ride out any local lockdowns, if they happen. But I really think we are out of the worst of it all.

“We have some really good acts lined up for this season. Rich Hall and Hal Cruttenden on opening night (a one-off, Friday 18th September), then Rich Hall again headlining the Saturday. Also coming up are Sara Pascoe, Nick Helm, Simon Brodkin (bloke that does Lee Nelson), Daliso Chaponda… we have loads coming up in Nottingham.

“We are also opening up again in Reading and Leamington Spa. We'll soon know about Birmingham and Leicester. Hopefully Edfringe will happen next year and we can just put on the 180 shows a day for 24 days that we cancelled this year.”

Tickets are on sale now for Just The Tonic’s relaunch shows, coming soon in Autumn 2020.