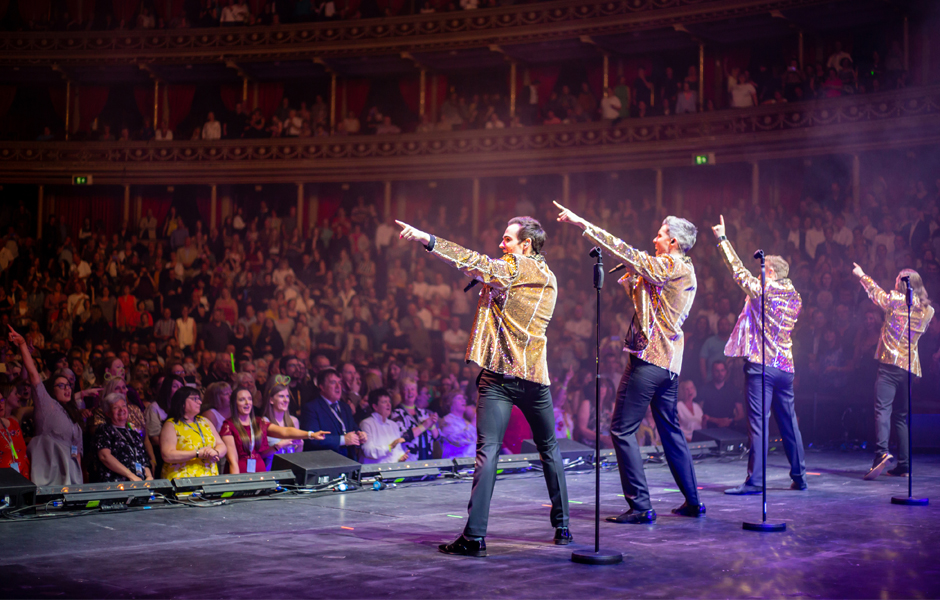 Since winning Britain's Got Talent in 2014, Collabro have gone on to sell out four UK tours, headline Wembley Stadium and release five top-selling albums. Due to the current situation, their tour has been rescheduled for 2021 where the band will perform all their greatest hits. We caught up with them ahead of the release of their first-ever festive album, 'Christmas is Here', which is out now!

How did you all get into singing? Were you trained professionally?

Jamie trained classically under a mentorship scheme with one of the ENO principles.

Tom trained at the University of West London, graduating in 2012 with BA (Hons) in Musical Theatre.

Michael trained at London School of Musical Theatre and graduated in 2013.

Matt had no professional training

How did you all meet?

Jamie and Matt were working abroad on a holiday contract. Matt was in Spain and Jamie was in Cyprus. They became friends and the idea formed of starting a musical theatre boyband. They then held auditions when they got back from their seasons. Michael and Tom were actually the first two that auditioned…and the rest is history!

How does it feel to have been able to help bring some elements of opera and musical theatre into the mainstream through Britain's Got Talent to reach people who may not have been familiar with these genres before?

When we stepped out on the BGT stage we wanted to give the impression that we were going to sing pop, so we were dressed in jeans and t-shirts. We then started singing 'Stars' to everyone’s surprise and made the point of just being a group of friends that love singing musical theatre. Our debut album “Stars” reached number one in the mainstream charts, and that was incredibly moving for us, as that was what we wanted to do, bring musical theatre to a wider audience.

You’ve performed at some incredible venues and been on tour a few times, what’s been your most memorable moment?

If you could have any artist cover one of your songs and give it a pop/rock/rap twist, who would it be and which song would you choose?

We would love to have Beyonce join us for “Ave Maria” which we have just released on our 'Christmas Is Here' album.

Who are your musical icons?

Who would be your dream artist to perform with?

We have all said before that we would love to duet with Beyoncé, or Celine Dion!

You’re heading back out on the road next year, what’s your favourite part of touring?

We are indeed! We have re-branded our tour and created a Greatest Hits tour, which we are incredibly excited about. This year has been awful and we have missed going out on the stage every night and seeing the reactions from our fans. We genuinely do have the greatest fans in the world and seeing them every night, that is the best part of touring.