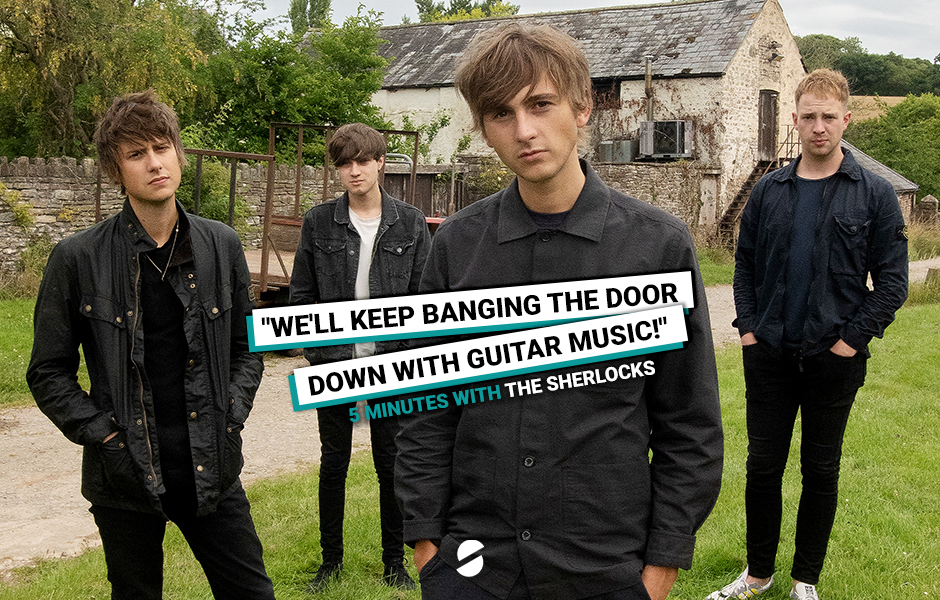 Rock 'n' Roll stalwarts The Sherlocks have marked their triumphant return with the announcement of forthcoming single 'End Of The Earth' — set for release on 9th April — and have revealed their rescheduled UK tour dates and festival appearances, in addition to announcing a new very special livestream performance via Sessions.

The special livestream performance show via Sessions is also taking place on Friday 9th April. The Sherlocks' electrifying and unpredictable live shows are what put the band on the radar to many, and the group have been revelling in the opportunity to get back on stage.

Ahead of this special show, and their UK dates taking place later this year, we spoke to lead vocalist and guitarist Kiaran Cook from The Sherlocks about what he's been missing about live music, what the band been working on during lockdown, and what we can expect to see from the livestream next month...

First of all, tell us the story of how The Sherlocks came about. How did you get together as a band?

We basically started in my mum and dad's conservatory with me and Bran making a load of noise... kept at it and worked our way into pubs and clubs. That then grew to taking it around the world, and supporting the likes of Liam Gallagher, The Libertines, Kaiser Chiefs, Kings of Leon, Richard Ashcroft... and loads more!

It's been a while since we've all been inside a venue for a proper gig, and we can't wait to get back there - especially for your Albert Hall show in October! What have you missed most about the live experience, either as a performer or a spectator?

We’ve miss the energy and the buzz of the crowd, which makes you buzz off them. Together the band and the crowd build a night to remember and that’s when you end up with moments of madness like getting on a random person's shoulders or crowd surfing! Miss that big time, but won’t be long now!

Time in lockdown has made us all feel pretty nostalgic for live music. Are there any stand out performances or festival appearances with The Sherlocks you can recall from your career so far that you wish you could relive?

Headlining Manchester’s Victoria Warehouse was a stand out point in time for us where we really felt the fans behind us! Our biggest headline show to date, a proper night to remember!

A lot of artists have used this time of lockdown to create. Did you find that lockdown was a useful time to start making new music, or did it just come about naturally?

It’s definitely been a creative time for our band, but at the same time it happened naturally. Whilst we couldn’t gig, we knew we were sat on a very strong record and what need to happen was getting it recorded. So that’s exactly what we did and it turned out our best one yet!

Since then we’ve been non stop with all the other stuff such as music videos, and alternate versions etc. And more importantly beginning work on demoing the fourth record!

Are there any particular bands or artists you've discovered or been listening to on repeat recently? Have any of them influenced your songwriting?

Not recently to be honest, but I have found myself going back through the decades and appreciating the whole 90s scene and a lot of punky stuff from the 70s! And that stuff rubs off on you more than a new band can sometimes.

There’s been some good songs come out of them years, and guitars were definitely a lot cooler then. That’s what we’re about, and we’ll keep banging the door down with guitar music. It’s the best music in the world. There’s a lot of crap out there at the minute, bad songs camouflaged with fancy production.

Your new single 'End of the Earth' is out in a couple of weeks' time. Tell us about the song and what it means to you.

This song is about the where I was on a particular day, presumably around April last year, and looking at what was unfolding in front of my eyes with the world. It’s quite an edgy tune, and a little different for us. Then again I think all of our tunes are pretty different to each other. But yeah, you could say it’s got a bit of a Strokes vibe crossed with perhaps someone like Queens of the Stone Age... I dunno it’s hard to pinpoint, you’ll have to wait till 9th April and make your own minds up!

Overall, what is your biggest take away from the last year?

Had a pretty big Chinese takeaway towards the back end of last year... was monstrous, to be fair. Definitely due another soon... !

On 9th April - the same day you release your new single! - you'll be performing a special livestream from Sheffield. What made you choose Sheffield City Hall as the venue for this event?

Just cos it looks mega. If you’ve ever been inside that place you’ll know what I mean. It’s a got a good vibe about it, and while the fans can’t get in and ruin the walls with sweat and beer, we thought we’d use the opportunity to go to a posher venue than normal. Top place though that, and was very good of the City Hall to let us do the show there.

What can fans expect from this show? Do you have any tricks up your sleeve for the stream that you wouldn't necessarily have planned for a live show in front of an audience?

If we told you that, the tricks would no longer be up our sleeves. Yeah and no... there’s no real gimmicks to be honest and we wanted to keep it like a proper rock n roll gig and obviously we don’t wanna bore anyone with talking too much. But yeah, we played a few new songs that no one's ever heard...

I'm sure your fans are keen to know... do you have any plans in the works for another UK tour in the near future?

Yeah 100%. We’re planning stuff now and have been for a while to come back with a bang. Our second record only got one tour out of it before obviously going into lockdown. So rather than sit around, as I mentioned earlier... we made a new record. So when the time's right, we’ll be back touring the UK and playing them songs. And the good thing about it is this new record will probably translate the best live out of all our records. Big anthem in choruses. Rock 'n' roll tunes. Ballads. Everything! We should have called this album ‘A Mixed Bag’!

The fans are gonna love it trust me. Wait till we drop the first single of it...

Grab yourself a ticket to see The Sherlocks Live Stream from Sheffield City Hall on 9th April now!