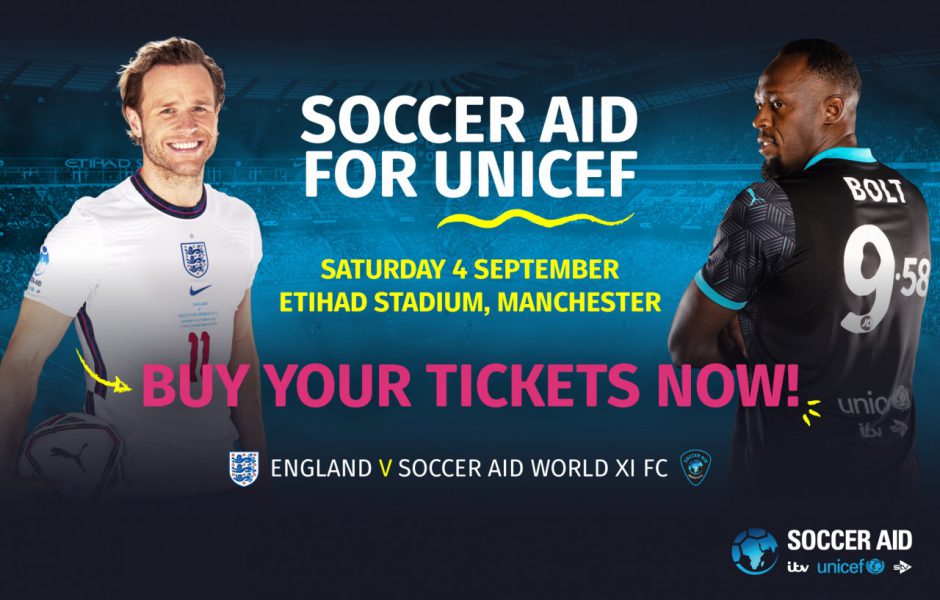 2021 sees the tenth edition of Soccer Aid for UNICEF and what better way to celebrate than by bringing together some regular faces – such as Olly Murs and Usain Bolt – and some newbies to what CEO of Soccer Aid Productions, Kenneth Shepherd, calls “the world’s biggest charity football match.”

The ‘new faces’ category includes England Women’s legend Fara Williams, pop favourite James Arthur and rising indie star Tom Grennan with many more to be announced! We caught up with Tom Grennan ahead of September’s event and he revealed that if he could choose any musician to join his team, “it would have to be someone like Liam Gallagher; a madman, he's a bit of a Roy Keane so I'd have him.”

Kenneth Shepherd echoed Grennan’s desire for a feisty affair – explaining: “Of course there’s a bit of friendly rivalry, that’s all part of the fun! But that’s all forgotten as soon as the teams step off the pitch. There’s a real family feel to Soccer Aid with everyone keeping in touch through Whatsapp groups and post-match meets.”

Keeping things fresh ten editions on, Soccer Aid for UNICEF has hopped across the city and will now take place at Manchester City’s spectacular Etihad Stadium. Shepherd beamed: “We have the best fans and we really missed them last year! Some have been with us since the very first match in 2006!” Arching back to what it means for everyone involved with Soccer Aid for UNICEF, he admits that everyone involved has played their part in “raising money to help give kids all over the world the best start in life,” adding: “We honestly wouldn’t be where we are without the support and goodwill of the celebrities and footballing pros that take part every year. It was only meant to be a one off and here we are, celebrating our 10th event!”

One of those that has turned up time and time again is Olly Murs. A consistent face since 2010, the energetic singer offered us an insight of what goes on in the changing rooms before the big match: “We’ll have to see who is on the DJ box this year, but last year we had a load of soul music. It was David James on the decks and he played some of his favourites so we had the old disco tunes which was fun!”

With Soccer Aid for UNICEF taking place in the same year as the Euros, we took our opportunity to quiz Olly on his favourite song from previous tournaments – avoiding the usual suspects of World In Motion, Vindaloo or Three Lions, he plumped for All Together Now by The Farm!

Tom Grennan leans more towards the indie scene when asked which tracks will be hyping him up before taking on the Soccer Aid World XI and reveals that it will “probably be a The Stone Roses tune! I love The Stone Roses and always used to have them on in the car on the way to school.”

The Stone Roses packed out The Etihad across four nights in June 2016 and Kenneth Shepherd notes the similarities of what to expect at Soccer Aid for UNICEF 2021: “For the players, there’s nothing better than a packed stadium. It completely changes the energy, so welcoming fans back this year will be really special for everyone involved in the event.”

Tickets are on sale now for Soccer Aid for UNICEF - buy yours here.

Check out the line-up so far here.