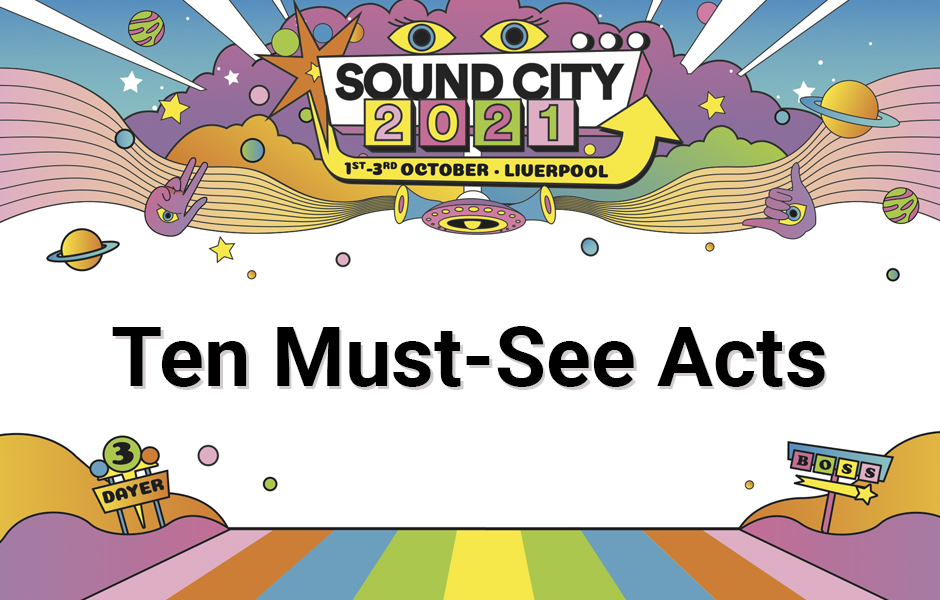 Liverpool's Sound City festival returns this October and promises a line-up packed with brilliance. From the likes of Beabadoobee and The Murder Capital who have established themselves over the past couple of years, to up and coming new favourites such as Deco and CRAWLERS - we took on the near-impossible task of choosing ten MUST-SEE acts!

Following the release of debut album, 'Fake It Flowers', Beabadoobee takes her rightful place as headliner of the opening day of Sound City 2021. Showing no signs of slowing down or coasting on the momentum of her success, Beadoobee has already released the lead single from forthcoming EP, 'Our Extended Play' in the form of 'Last Day On Earth.' Produced by Dirty Hit label-mates Matt Healy and George Daniel (The 1975), Beabadoobee's rise over the past couple of years has only just started and this won't be the last festival line-up she tops.

The Murder Capital's 'When I Have Fears' was one of the most critically acclaimed records of 2019 and even now it is as gritty and thrilling as it was two years ago. The post-punk Dubliners' UK wide tour last year rapidly sold out and gave them a platform to showcase their minimal yet gripping live performance. Stripping themselves back and avoiding gimmicks or over-the-top production, they have previously drawn comparisons to Joy Division, Savages and Bad Seeds, but their soundscapes are entirely unique and original.

Discovered by Seymour Stein (Madonna, The Ramones, Talking Heads, etc.), The Lottery Winners worked their way up from social clubs around Lancashire to become a leading face of the British indie scene. They had a productive 2020 - releasing not only their self-titled debut album, but also a covers compilation featuring the likes of 'Never Gonna Give You Up' (Rick Astley) and 'Love Will Tear Us Apart' (Joy Division). As Rough Trade put it: This is your new favourite band, whether you know it yet or not.

Darlington based singer-songwriter Jodie Nicholson has spent the past year taking the north east and beyond by storm, and is reaping the rewards by becoming one of the most talked about emerging artists of 2021. Described as "the type of artist who has the ability to make an audience go so quiet you could hear a pin drop," her latest single 'Be Back Soon' is an emotive ride executed with blissful vocals and delicate instrumentation. Expect a mellow set from Nicholson - perfect for having a breather and taking in her ambient tones.

You may recognise Deco from their incredible recent covers of 'Sex On Fire' (Kings of Leon) and 'Human' (The Killers) or from their mash-up soundtrack to the season finale of 'That Peter Crouch Podcast.' However, their original material is equally mind-blowing - laden with piercing synths and 80s-esque vocals, Deco give off strong early-Metronomy vibes and are 100% the perfect festival band. 2017 single 'Chances' is probably their 'biggest' hit, but their full discography is brimming with feel-good beats.

Delicately blending alt-pop with psychedelic underpinnings, Pixey has been lauded as 'one-to-watch' since her self-released debut EP, 'Colours' dropped in 2019. Fast-forward two years and Pixey's latest EP, 'Free To Live In Colour' is one of the boldest and most exhilarating releases of the year so far. Written, recorded and produced in her bedroom during lockdown; Pixey's efforts were rewarded with being signed to 'Chess Club Records' - aka the home of breakthrough icons Alfie Templeman and Phoebe Green.

Alt-rock quartet CRAWLERS are arguably the band we're most excited to catch over this weekend. The Liverpool outfit have been celebrated by 'BBC Introducing', 'BBC Radio 6' and 'Radio X' to name just three and it is clear to see why. Brimming with crashing drums, immense riffs and a hybrid of punk-garage-and-rock vocals to tie it all together, CRAWLERS ooze excellence and with just a handful of releases so far we can't wait to see what's next.

York quartet Bull are the first band from the city since Shed Seven to sign a major label deal and with the release of 'Discover Effortless Living' and it is clear to see why. Filled with slacker-rock and a modern twist on '60s and '70s psychedelia, tracks like 'Green' and 'Eugene' are the perfect soundtrack to those hazy summer days. Described by 'DIY' as "a guitar-wielding force to be reckoned with," their 'one-to-watch' status is very quickly becoming a thing of the past.

Lanterns on the Lake

2021 sees the tenth anniversary of 'Gracious Tide, Take Me Home' - aka the debut album from Lanterns on the Lake. Over the past decade, the Newcastle-Upon-Tyne five-piece have cemented their place as one of the most awe inspiring acts in the UK with a further three albums - most recently the Mercury Prize nominated 'Spook The Herd' last year. Described as "musically elegant, emotionally eloquent, and absolutely vital," Lanterns on the Lake are a truly magical outfit and one not to be missed this October.

Crystal Palace duo JOHN - or JOHN (TIMESTWO), cleverly derived from both members being named John - are one of the loudest acts at this year's festival. 2019's 'Out Here On The Fringes' and 2017's 'God Speed In The National Limit' are two of our favourite records from the past five years. Packed with roaring vocals, intense instrumentation and a fierce stage presence, JOHN's records are simply a diluted canapé of what to expect on the live platform.