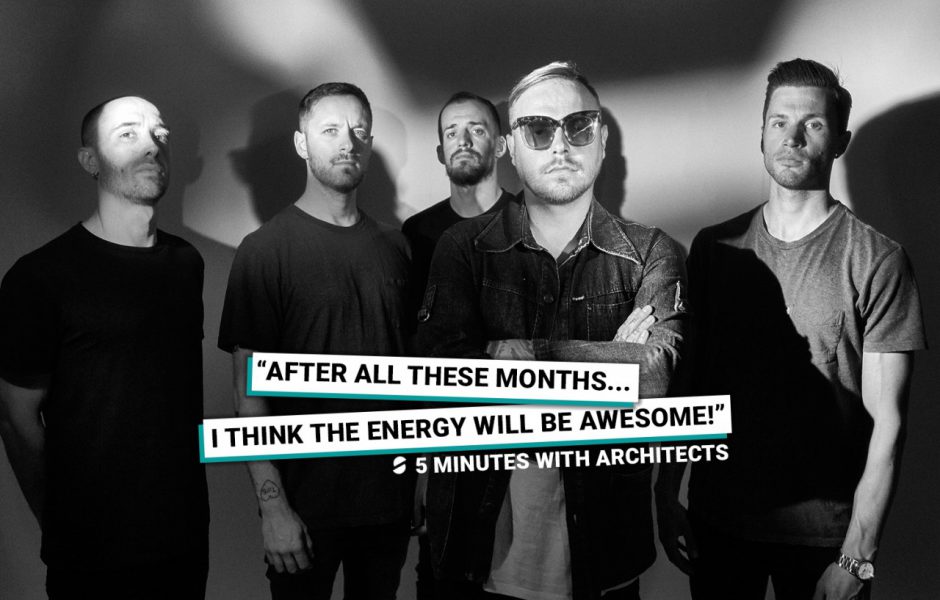 British metalcore band Architects are legends in the UK live music scene. Thanks to their tight and electrifying performances, they've won multiple awards since their inception in 2004. Having become seasoned veterans of the scene, it's safe to say that after a couple of dormant years they're ready to get back to the stage and try out their new album 'For Those That Wish To Exist' on an eager in-person audience.

Architects will be heading out on a brand new tour in May 2022. Ahead of the shows we caught up with the band's rhythm guitarist Adam Christianson. We spoke about writing their latest record, livestreaming at the Royal Albert Hall and getting back on tour.

You released the first single from Architects most recent album 'For Those That Wish To Exist' back in October 2020. How long had you been working on the album prior to this, and do you feel that the process of writing and recording was affected at all by the arrival of the pandemic in 2020?

Writing for us is kind of an ongoing thing; it never really stops. Dan and Josh are always coming up with new material even shortly after an album is released. It some ways it was a very different writing and recording process, and others it was not really affected. Writing usually happens remotely anyway, from each other's respective home studios. The recording process was definitely very different this time around, for the fact that the whole band wasn’t together at any one time for the sessions. It was limited by geographic factors and how many bodies could be in a the studio at any one time.

This Architects album notably draws on a variety of genres and influences. Do you feel as though this was a natural progression from your previous album ‘Holy Hell’, or was it a case of really stepping outside of your comfort zone and pushing new boundaries?

It was certainly a case of stepping into new territory. It was a bit of a clean slate in the sense that it was 100% new material, whereas 'Holy Hell' had various songs & elements that had stemmed from Tom as a starting point. Trying new things with guitar sounds, incorporating a lot more electronic elements than we had in the past. Even stylistically trying radical new things that would never have been on a previous Architects record.

You also worked with a number of incredibly talented artists like Winston McCall (Parkway Drive), Mike Kerr (Royal Blood) and Simon Neil (Biffy Clyro) on the record. Tell us about how these collaborations came about and what that experience was like for you.

We have been friends with Parkway Drive for many years, so that was an easy one getting Winston involved. I really love what he did on the song 'Impermanence', it really brought a ton of energy to an already highly intense song.

Mike from Royal Blood is a fellow Brightonian, so that was another really easy one. They are such a cool band that we respect a lot and 'Little Wonder' really suited Mike’s vocal style and the dancey kind of vibe.

We’ve been big Biffy Clyro fans for years so having Simon feature on 'Goliath' was awesome. Although we don’t really know him personally, there’s always been a big mutual respect between Biffy and Architects. I absolutely love what Simon did on the track as well - definitely some Biffy vibes on that one!

After announcing the new album last year, you performed a special livestream at the Royal Albert Hall in November - tell us about this experience and how it felt to be performing to a virtual crowd when ordinarily you'd be debuting new songs to fans in person.

It was certainly one of the most unique experiences we’ve had as a band. I personally had never even been to the [Royal] Albert Hall before, but of course is such an iconic and historic venue, so playing totally empty was wild! It felt a bit like being thrown into the deep-end; when playing new songs, the energy you get from the audience really pushes you as you’re finding your feet playing new material. This time it was all on us! Really pleased with how it came out in the end.

For two years running Architects were awarded Best British Live Act from the Kerrang! Awards. Do you feel this puts an amount of pressure on you - to live up to this expectation - when you perform, or does it motivate you to continue putting on the best shows you can?

I think we put enough pressure on ourselves as it is. We’ve set quite a high standard for ourselves which really pushes us to continually do better. I guess that means it’s working!

After such a long period of not being able to perform live, what can fans expect from your upcoming shows? Have you been working on anything special for this tour that you can tell us about?

Everyone has been so pent-up after all these months, I think the energy will be awesome. It’s such an infectious thing when everybody is having a great time and in a feedback loop of energy. I suppose one thing that will be different in this situation is people will have lived with the album for longer than usual without seeing it live; so they may have their own “vision” in their minds of what it will be like live. It will be interesting to have them to react with the production and everything and hopefully exceed their expectations!