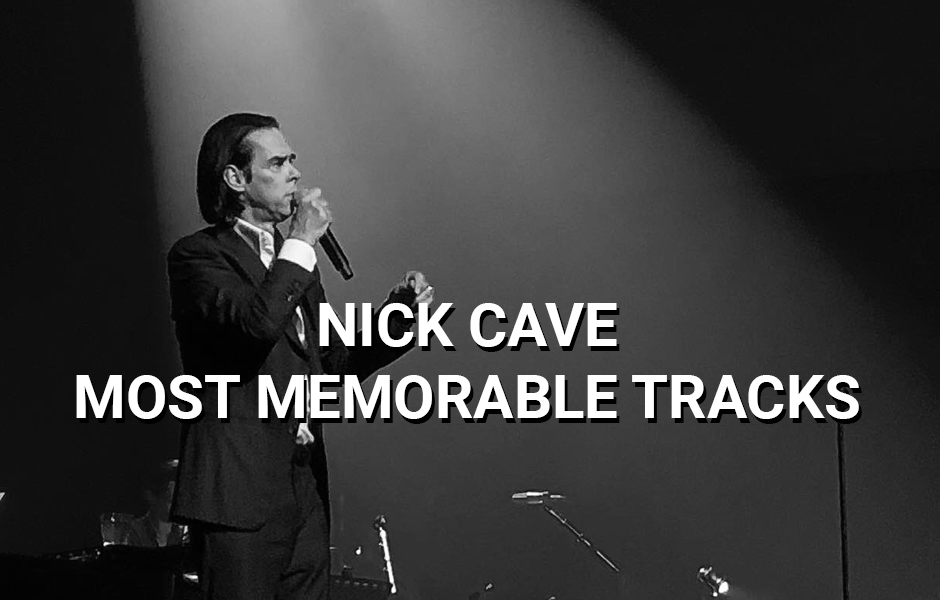 Nick Cave is undoubtedly one of the most iconic artists of a generation. Famed for his baritone vocals, fronting The Bad Seeds, regularly donning a sharp-fitting black suit and writing both eerily dark and poetically beautiful lyrics - the Australian wordsmith celebrates his 64th birthday this week, so we have compiled a comprehensive guide to his most bold and brilliant tracks.

Inspired by Orpheus' love his wife Eurydice, 'Breathless' is packed with Cave's typically brilliant imagery such as "the bubbling brook" and "the wind circles around the tress." The single features on 'Abattoir Blues / The Lyre of Orpheus' - the 13th LP from Nick Cave and the Bad Seeds back in 2004 and has been a cult favourite within the fan base ever since.

Piano-led ballads are a signature sound for Nick Cave, and 'Into My Arms' is arguably the most iconic of the lot. The opening track from 1997's 'The Boatman's Call' was the perfect bridge between Cave's earlier and grittier work and his later blissful material - and a track that has become a regular inclusion on live setlists for the past two-and-a-half-decades.

Where The Wild Roses Grow

Teaming up with fellow Aussie, Kylie Minogue, 'Where The Wild Roses Grow' is a murder ballad depicting the dialogue between the killer and his victim - and like much of Cave's material, the dark and sinister undertones are disguised in soft and melodic instrumentation. The pair performed this single during Minogue's 'legends' slot at Glastonbury 2019 to a fantastic reception.

'Jubilee Street' is a track of two halves - the first being a slow-building, scene setting, typically-Cave ballad; before bursting into chaos in the latter half of the anthem. Released in 2013, it revisits the raw and emotive energy that Nick Cave & The Bad Seeds offered with their earlier releases. It is a fan favourite and a track that often gets the live treatment, whether that is with The Bad Seeds or ringing out from a piano during a Nick Cave solo set.

Teaming up with long term bandmate and companion Warren Ellis, Cave's latest offering - the sublime 'Carnage' - is an emotively charged album written and recorded during lockdown. Brimming with memorable lyrics and stunning musical arrangements, the highlight from the record is 'Shattered Ground.' Five-and-a-half minutes long, this track will go down as some of Cave's finest work to date, which is quite the compliment given his discography.

Cave's vitriolic lyricism is at its gritty best throughout 'Stagger Lee.' Plucked from the genius that is 1996 LP, 'Murder Ballads', Nick Cave gives an alternative take on the original tale of Stagger Lee - commentating on a shoot-out in a bar where the protagonist is on a gun-wielding rampage. Described as "bleakly humorous, reflected in the banter Cave builds into the tale," there is no denying that this is some of the most twisted and gruesome lyricism the Australian has produced, but equally some of his most creative.

The latest offering from Nick Cave & The Bad Seeds as a whole (as opposed to just Cave & Ellis) was the magical 'Ghosteen' from 2019. Awarded 5 stars from The Guardian and a worthy 8.8 'Best New Music' by Pitchfork, it is a record encapsulating a career of 35 years and the first recorded in its entirety since the death of Cave's son Arthur. 'Galleon Ship' is a reflective ballad and one that will undoubtedly be revisited time and time again when the band curate setlists.

One of the most uplifting tracks from Cave's extensive back catalogue, 'The Ship Song' turned 30 last year yet remains a hugely refreshing sound for the band. Released as the first single off of 'The Good Son,' it followed the raucous 'Tender Prey' (1988) and unsurprisingly raised a few eye-brows with its juxtaposing soundscapes and even a glockenspiel solo from Mick Harvey.

God Is In The House

'No More Shall We Part' - the first Nick Cave & The Bad Seeds record of the 21st century - features the lyrically brilliant 'God Is In The House.' Telling tales of a quaint 'do good' town and the non-moralistic activities they get up to, Cave's tongue-in-cheek jabs critique the inhabitants of the town that portrays itself as saint-like, yet when he scratches the surface he quickly exposes the 'sin' that everyone is secretly carrying out.

From Her To Eternity

The title track from Nick Cave & The Bad Seeds' debut LP, 'From Her To Eternity' was written by the all-star cast of Nick Cave, Mick Harvey, Blixa Bargeld, Anita Lane, Barry Adamson and Hugo Race. It is a fantastic and timeless insight into what would follow and what fans could expect across the next 35 years of 'The Bad Seeds', and even now features prominently on setlists.