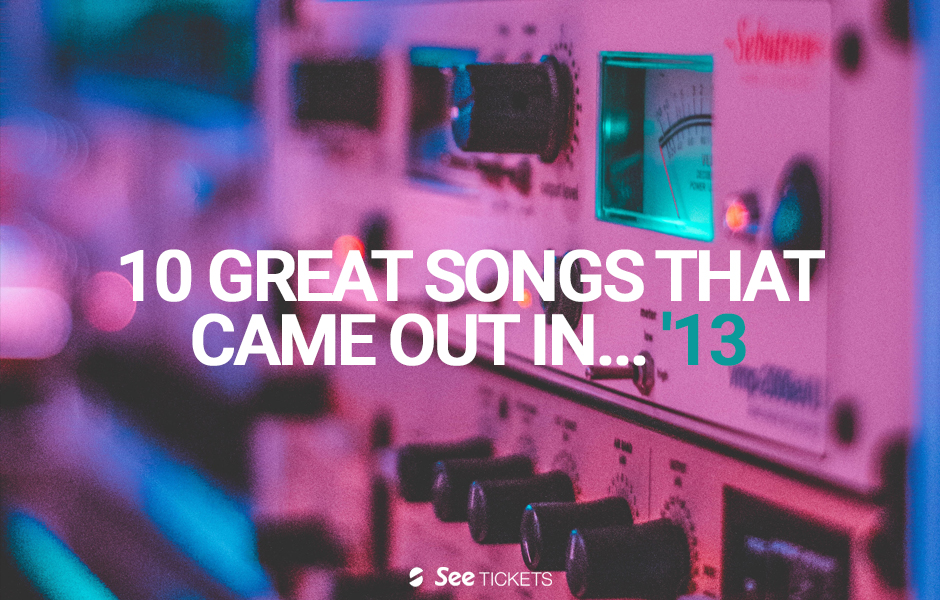 We're transporting you back to the year of 2013 for the latest in this blog series, where the biggest song was the now controversial 'Blurred Lines' and the likes of Royal Blood, Blossoms and Japanese Breakfast had only just got together...

'White Noise' is Disclosure's follow-up to their breakthrough single 'Latch'. With vocals from Aluna Francis aka one half of AlunaGeorge, the single was the second they released from their debut album. It was so good that Billboard even named it the eighth greatest song of 2013! The pair are heading to Alexandra Palace next year, sadly tickets have sold out but you can join the waiting list here.

We couldn't miss out this enormous break-up ballad from our list, which was released as a single for Miley's hugely popular album, 'Bangerz'.  Fun fact: The song was originally written for Beyoncé and had previously held a record for the most video views in the first 24 hours after its release.

'Pompeii' was British band Bastille's breakthrough hit and was taken from their number one debut album, 'Bad Blood'. The song became the eleventh best-selling song in 2013 and until 2014 it was the UK's most-streamed single of ALL TIME! Bastille are heading out on a huge tour next April, grab tickets now.

'Holy Grail' was the first single to be released from Jay Z's twelfth studio album, 'Magna Carta... Holy Grail', where it topped the charts in 59 countries and became Jay Z's first number one album in the UK! Justin Timberlake features on the hit single and it won a Grammy award in 2014 for 'Best Rap/Sung Collaboration'.

'Roar' is a song that Perry wrote about standing up for herself and self-empowerment after the end of her marriage to Russell Brand. The song was taken from the pop stars fourth studio album 'Prism' and in 2020 the music video had reached 3 billion views, making it the most-watched female-centred video in YouTube's history.

At just 16, Lorde won awards for 'Song of the Year' and 'Best Pop Solo Performance' at the Grammy Awards for 'Royals', and the hit subsequently went on to sell 10 million units worldwide - making it one the biggest selling singles of all time. Lorde aka Ella Yelich-O'Connor originally self-released 'Royals' in 2012 on 'The Love Club EP' on Soundcloud and the song immediately garnered a huge social media reaction. It was later released as the lead single for her critically praised debut album, 'Pure Heroine' in 2013.  Lorde has been busy since 2013, having just released her third studio album, 'Solar Power', and is heading out on tour next spring/summer. Grab tickets while you can here.

Arctic Monkeys - Do I Wanna Know?

'Do I Wanna Know' was the second single to be released from Arctic Monkeys' critically acclaimed fifth studio album, 'AM' back in 2013. The single spent 64 weeks in the UK's Top 100, making it the longest run of any Arctic Monkeys song to date, and was their first song to enter the Billboard Hot 100 in the United States. Rumour has it the band are currently working on their next album and they've just been announced as headliners for Cala Mijas festival in Malaga - get tickets here.

'Counting Stars' was the biggest single to be released from their third studio album, 'Native', and allowed the band to achieve their first-ever UK number one single! Ryan Tedder is not just the frontman of OneRepublic, but is also a songwriter who's written HUGE hits such as Leona Lewis' 'Bleeding Love' and Beyonce's 'Halo', to name a few. OneRepublic are hitting the road in April 2022, so grab tickets quick if you fancy seeing them live.

This disco track from French electronic duo Daft Punk, featuring Pharrell Williams and Nile Rodgers, was and still is one of the most popular songs of all time and there's no doubt you didn't hear it multiple times upon its release in 2013. The song broke Spotify streaming records on the day it came out and achieved the highest number of streams within 24 hours in both the UK and US, breaking Bastille's record.