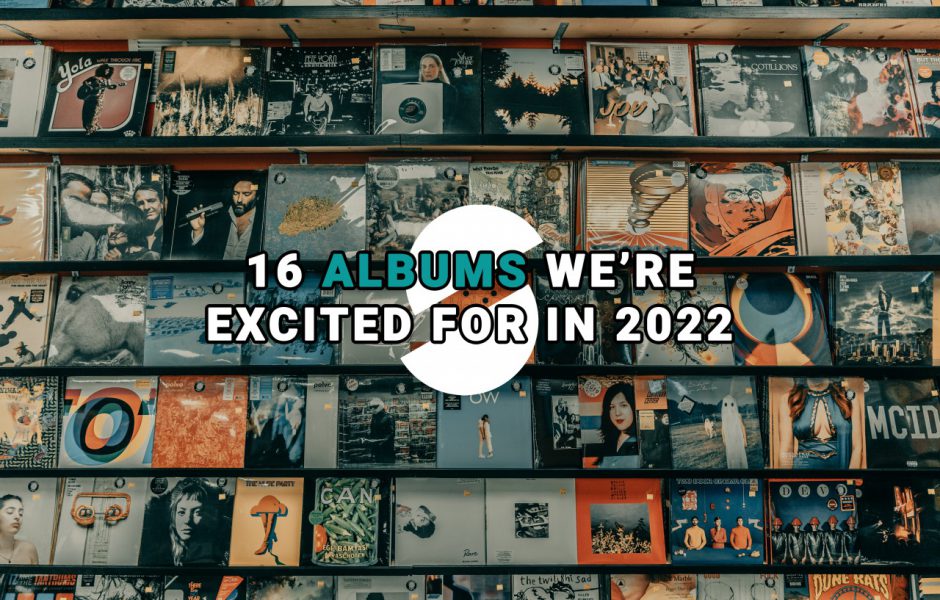 Whether they're 100% confirmed or just a whispered rumour right now, we're expecting a huge number of incredible albums to be released in 2022. Having spent much of the last couple of years in isolation, it's likely many of our favourite artists have had an unprecedented amount of time to work on music and explore new directions.

We've put together a list of our most anticipated albums expected in 2022 - what are you most looking forward to seeing? Let us know on social...

Album Title: Oxy Music
Release Date: 11 March
Why We’re Excited: It's been three years since Cameron - our appointed Artist Spotlight in November - released his reflective and romantic third album 'Miami Memory'. Since then, he and his business partner Roy Molloy have been in the studio working on some new tunes, and released their first offering 'Sara Jo' late last year. It's more of the sharp wit and songwriting we've come to expect, and we can't wait to hear what else the duo been working on before they head out on tour later this year.

Album Title: TBC
Release Date: TBC
Why We're Excited: Their last album proved to be their most divisive yet, but Arctic Monkeys showed us with 2018's 'Tranquillity Base Hotel & Casino' that they still have plenty of tricks up their sleeves. Never the same twice, the indie rock legends confirmed a new album is on the way - ahead of a number of festival appearances in summer 2022 - when drummer Matt Helders spilled that the new album was "pretty much" ready to go. We can't even begin to comprehend where their as-yet-untitled return will take us.

Album Title: Love Sux
Release Date: 25 February
Why We're Excited: Speaking to Entertainment Weekly, Avril Lavigne revealed that with her upcoming seventh album, she fought hard to be able to take her sound back to her pop-punk roots. Working with blink-182's Travis Barker - and signed to his label DTA Records - Lavigne released her first single from the record 'Bite Me', with many fans (us included!) praising the pop-punk sound she desperately wanted to bring back. Are you lucky enough to have bagged a ticket to see her live in the UK this March? You might see some new material for yourselves!

Album Title: TBC
Release Date: September
Why We're Excited: The question is... why wouldn't we be? Beyoncé's last solo effort 'Lemonade' brought forth an historic moment in pop culture. The album was widely praised and alongside its accompanying film was a moment of realisation for us all that Beyoncé is a true icon and innovator. How will she begin to match 'Lemonade'? We can't wait to find out in her upcoming release, which Bey has been working on for over a year and a half, according to her interview with Harper's Bazaar. While we've had sprinklings of music from Beyonce since 2016's 'Lemonade', including her release with husband Jay Z as The Carters, we're looking forward to a full solo release in the near future.

Album Title: TBC
Release Date: TBC
Why We're Excited: In July 2021, Caroline Polachek released 'Bunny Is A Rider': an instant earworm and a song that ended up on the vast majority of critics' and publications' end of year lists (including our own!). Throughout 2022 Polachek will be appearing as support on Dua Lipa's The Future Nostalgia Tour in the US, and at a number of summer festivals in Europe. So, we're hoping this will be the opportune time for the alt-pop singer-songwriter to release a new full length LP.

Album Title: CRASH
Release Date: 18 March
Why We're Excited: Charli XCX has been teasing her upcoming album 'CRASH' for a while now, having already released a couple of high energy, immediately catchy singles in the form of 'Good Ones' and 'New Shapes'. In fact, we named 'New Shapes' one of our favourite tracks of 2021. The album promises collaborations from some titans of the pop music industry, including Christine and the Queens, Caroline Polachek, Rina Sawayama, and loads more. It's going to be one hell of a record.

Christine and the Queens

Album Title: TBC
Release Date: TBC
Why We're Excited: Christine and the Queens delivered what many considered to be the highlight of her career so far in 2020 with her EP 'La Vita Nuova': her last release since the acclaimed 'Chris' in 2018. We even included the track 'People I've Been Sad' as one of our top tracks of 2020. In the first half of 2020 though, Christine said in an interview with the NME that she had begun working on a full-length follow up to 'Chris'. This, alongside what looks to be a number of lyric teasers posted on Christine's social media, points towards the possibility of a 2022 release and we know there are only bigger and better things to come.

Album Title: TBC
Release Date: TBC
Why We're Excited: The Cure have teased a new album for many years, but it seems we finally have confirmation that the LP will appear in 2022. It will be their first release in 14 years, and in a press release confirming their latest UK tour, they mentioned a "67 minute album" - no doubt a sprawling and epic offering. So, what can we expect from the album? We wouldn't like to hazard a guess, but we're excited to find out. After a string of song features recently from the band's Robert Smith, including one of our favourite tracks of 2021 (CHVRCHES' 'How Not To Drown') we've been left hungry for more. This is one of our most anticipated albums of the year.

Album Title: Caprisongs
Release Date: 14 January
Why We're Excited: Full disclosure... this mixtape might not quite fit the criteria. But, we're looking forward to it nonetheless. FKA Twigs' first albums 'LP1' and 'Magdalene' were complete showstoppers. Artistic and complex records, her first two albums were truly genre-bending and stunned fans and critics alike. In 'Caprisongs' we expect more of the same, but in a completely new and unique direction. The album features industry heavyweights such as The Weeknd, Jorja Smith, and Pa Salieu. If lead track 'Tears In The Club' and previous single 'Measure of a Man' are any indication, it's going to be a sublime release.

Album Title: Skinty Fia
Release Date: 22 April
Why We’re Excited: Fontaines D.C. are a band that have continually blown us away. Since first hearing ‘Dogrel’ back in 2019 and then again ‘A Hero’s Death’ in 2020, we've been hooked on their memorable lyricism and boisterous soundscapes. ‘Skinty Fia’ will be their third full-length LP and one that was promptly pre-ordered as soon as it was announced this week. We can't wait to see what the Irish punk outfit have in store for us this time.

Album Title: Book 1
Release Date: TBC
Why We're Excited: In December, Grimes released her latest single 'Player of Games'. She also confirmed the upcoming release of her sixth studio album 'Book 1'. If its predecessor 'Miss Anthopocene' is anything to go by, we should be incredibly excited by the promise of a new record. It was a triumphant release in 2020 for the Canadian art-pop artist, and widely acclaimed in the music press. If we can expect anything from Grimes it's the unexpected, and lead single 'Player of Games' indicates that 'Book 1' won't disappoint, much like her previous albums.

Album Title: TBC
Release Date: TBC
Why We're Excited: Last year, Kate Nash delighted us with two new tracks: 'Misery' and 'Horsie'. Thoughtful and melancholy, these singles are the first hints of an upcoming album due for release later this year from the indie-pop artist. We don't know all too much about the record as yet. But, as noted on her Instagram account, one of Nash's new year's resolutions for 2022 was to "release album I made in 2021". We're hoping she sticks to it and treats fans to a new release soon, which will be the fifth of her albums, and the third she has released independently.

Album Title: Two Ribbons
Release Date: 8 April
Why We're Excited: 'I'm All Ears' was one of our favourite albums of 2018. So, understandably, we're thrilled to see electro-pop duo Let's Eat Grandma back with their latest singles 'Hall of Mirrors' and the titular 'Two Ribbons'. Confirmed in November last year, the new album 'Two Ribbons' already boasts a variety of sounds based on the first two singles and it's certainly whet our appetite for more. We can't wait for this one!

Album Title: Shoals
Release Date: 21 January
Why We’re Excited: London based indie band Palace returned with the first singles from the upcoming album ‘Shoals’ towards the end of 2021. ‘Lover (Don’t Let Me Down)’ and ‘Gravity’ gave us a glimpse of what to expect from the third of their albums, with their raw emotion and lyricism alongside their experimental and distinctively hypnotic riffs. In an interview with NME, Leo Wyndham explains that the album confronts a lot of personal reflection, anxieties and existential doubt whilst emerging with new sounds they would never have dreamed of using before, and we can’t wait to indulge in it. We're hoping there will be plenty of the new tracks featured on the band's UK tour this February!

Album Title: TBC
Release Date: TBC
Why We're Excited: Fans have been anticipating a follow up to Paramore's 2018 release 'After Laughter' for quite some time. Self-confessed as Paramore's "biggest fan", vocalist Hayley Williams detoured into releasing two solo albums in 2020 and 2021, but always maintained this wasn't a permanent direction. Rumours of "sixmore" - the fan-created nickname for Paramore's sixth LP - have been growing steadily for months. Earlier this week, the band confirmed their return to the studio in an interview with Rolling Stone. It promises "more emphasis back on the guitar, and Zac [Farro] should go as Animal as he wants with drum takes". Exciting stuff, indeed.

Album Title: Wet Leg
Release Date: 8 April
Why We’re Excited: In 2021, Wet Leg made a splash with their critically praised debut single ‘Chaise Longue’. Even after months of playing on repeat, it's still as good as the first time we heard it. The Isle of Wight duo have since released other singles like ‘Wet Dream’ and ‘Too Late Now’ and have already performed on NPR’s Tiny Desk Concerts. With their dry sense of humour rippling through their lyrics, along with the catchy riffs, they are receiving all the recognition they deserve. We can’t wait to hear what their self-titled debut album has to offer this April, as well as on their sold out UK tour!