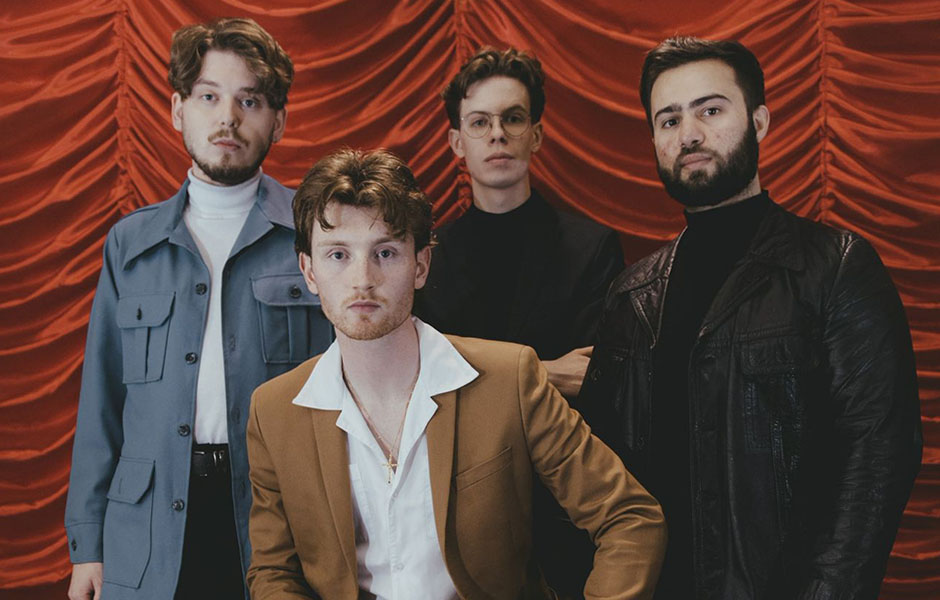 After releasing their newest single, ‘Cruella’ last year, Birmingham four-piece The Clause – Liam Deakin, Pearce Macca, Jonny Fyffe and Niall Fennell – who formed as a band during their time at sixth form are currently out on their UK tour.

We caught up with bands frontman Pearce Macca to find out how the tour is going, how they came up with their latest track ‘Cruella’, what other plans they have 2022 and more.

You’re finally able to be back out touring, how does it feel to be on the road again?

It’s an incredible feeling to be honest. We’ve been waiting to get back out on the road for a good two years and it’s exceeded all of our expectations. Just to see people back out having fun and singing our tunes back to us means so much. Every gig has been bouncing and we’ve loved every second of it.

You played in Birmingham last month as part your UK Headline Tour – what was it like to be back on-stage playing to your hometown crowd?

It was the biggest headline show we’ve done to date, a 700 cap sell out on home turf, what a memorable night. Definitely one of the best gigs we’ve ever done, the crowd was bouncing from start to finish and the feeling of hearing a sea of 700 people singing every word back to you is indescribable. It was a special, special night for everyone involved.

As a band and even individually, how has the pandemic and lockdowns over last 2 years affected you?

We’d be lying if we said it hadn’t hit us hard. Before the pandemic we were flying having just booked our biggest tour and festival season yet whilst braking into Europe for the first-time playing gigs in Paris. Then everything just stopped dead in its tracks. Not being able to do what you love was heart-breaking, but we didn’t want to sit around and feel sorry for ourselves, so we locked ourselves away and came out of lockdown with a collection of material better than anything we had written before. It was a really difficult period, but we firmly believe everything happens for a reason and lockdown gave us the chance to get this collection of material together which will hopefully take us to the next level.

If somebody is completely new to The Clause and your music, which three songs would you recommend they listen to and why?

'In My Element', 'Cruella' and 'Time of Our Lives'. Out of all the material we have on Spotify they capture our sound the best. Gritty Rock and Roll with big riffs and big choruses you can’t escape.

You released the monster of a track, 'Cruella' last year. How did the song come about/what influenced it?

It was actually a track myself (Pearce) and Liam wrote together during lockdown. We were in Vada Studios recording what will be our next single and Liam wrote this incredible riff whilst I was recording vocals. Funnily enough the idea for the lyrics arose as I was babysitting my little cousin and watching 101 Dalmatians with her. The name Cruella De Vil kept jumping out at me and I thought it could be clever if I could somehow use her as a metaphor to describe someone in a song. It was one of those songs where they lyrics and instrumental gel perfectly together and the song shows some of our influences we had never explored before, such as T-Rex.

'Cruella' has received an amazing response online, how has felt to finally be able to play it live and what’s been the reaction to the song at your shows?

It’s one of our favourites to play live with big riffs and guitar hooks throughout. It’s always a little gem for the fans as well, I always stand back and let them belt out the main hook at the end of the song “there’s nobody like my Cruella De-Vil”. It’s definitely a highlight of the set.

What has been your favourite show from your tour so far and why?

The easy answer is Birmingham as it was our biggest sellout show to date. But other than that it’s very hard to chose as they’ve all been surreal. One of the obscure shows on this tour was Derby as we had never played a show there before and to our surprise it was an unbelievable night. We didn’t really know what to expect but we played to a packed out 200 cap room full of fans that didn’t stop dancing until we finished playing. It’s a really good feeling knowing that so many people were so into our music in a place we had never even visited before.

Apart from finishing the tour, what does the rest of 2022 hold for The Clause? Any secrets you can share?

2022 is all about releasing our best music yet. We’ve been holding a lot of material back for the right time and that time is now. We’re determined to make this year our year and the collection of songs we’re going to release over this year is going to do that. They’re going to be coming thick and fast so make sure you stay tuned x

Grab your tickets to The Clause's headline UK tour below.