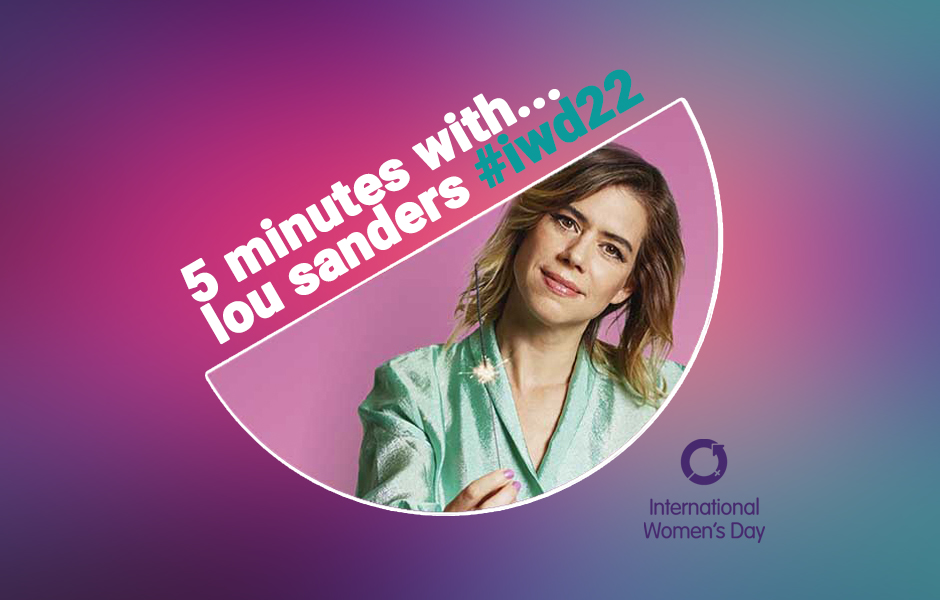 In the latest of our International Women's Day series, we spoke to comedian Lou Sanders. Lou's been around the block once or twice, having appeared on the likes of Channel 4's 'Taskmaster' and 'Travel Man', and more recently co-hosting 'Unforgiveable' with Mel Giedroyc on Dave. Lou's latest stand-up tour 'One Word: Wow' is on sale now, and we would highly recommend grabbing a ticket to see this world-class comedian live for yourself, to truly appreciate the laughs she has to offer!

I wanted to be a sumo wrestler but comedy was easier somehow.

The creative freedom, the different aspects of the job, working with friends and just having a bit of a bloody laugh. I like that we get to create and have autonomy but I also love collaborations. Also sometimes you get free crisps!

'Taskmaster' was very fun and I also loved 'Travel Man'. It's hard to pick one highlight, but I like when something I've said or written connects with people. That's when I think I am really lucky.

During your time in comedy, do you personally feel you’ve had to fight any battles because of your gender? How did you overcome it?

I think things have changed a lot since I've been doing stand up. It used to be the case that a woman would come out and everyone would fold their arms and you would have to work twice as hard, but it makes you a better comic ultimately. Maybe not on that night, as it's hard to change people's biases. But in the long run maybe it toughens you up. Everyone's got pros and cons to work with, I think.

Don't wear a dress that's shrunk in the wash, on telly, with no tights...

Write and gig as much as you can - factor it into your day.  But in a fun way, don't see it as work.  And the dress thing.

I don't think ​it's us and them, we can learn from each other. Men's stories are really important and women's are equally important. We'd get bored of one voice, we need them all to learn and grow and empathise with each other. People want to see their own lives reflected back at them and need learn from others' too.

What - if anything - do you think can be done to address the gender imbalance in live comedy, if you believe there is one?

I think the live scene is quite progressive now. Maybe I'm just not gigging in the ones that aren't - hard to say- but from what I've seen there's usually a good balance. Obviously some clubs are trailing behind, but they are worse for it - they just aren't very rich places of exciting acts.

Not a lot really. Seems a bit pointless. I think Alan is sticking with his own opinions and I think he'll be dead one day so good luck to him.