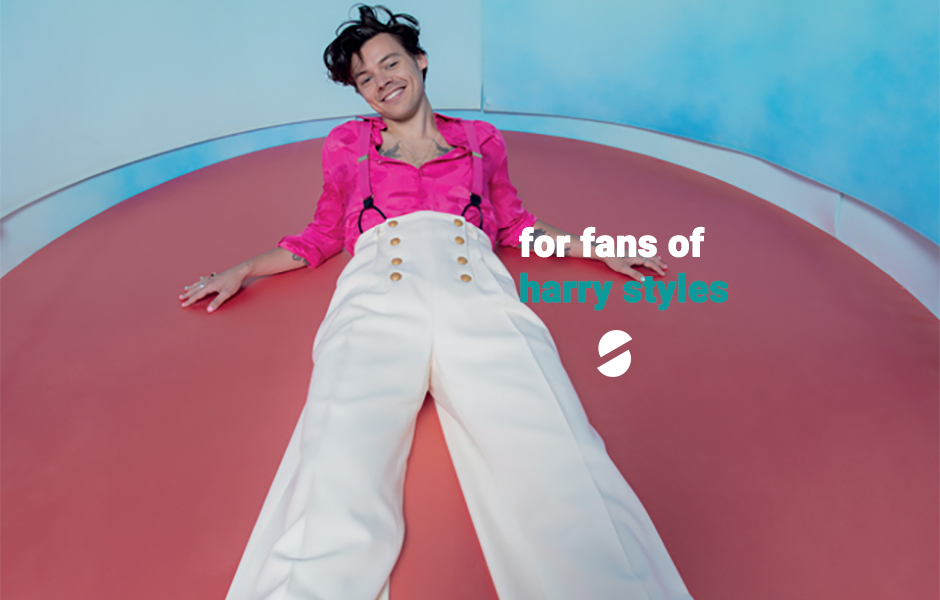 Harry Styles is a global music and fashion icon. Throughout his career, Styles has earned several honours, including two Brits, a Grammy, an Ivor Novello Award, and an American Music Award. Aside from music and acting, he is known for his flamboyant fashion and was the first man to appear solo on the cover of Vogue magazine.

His self-titled debut solo album was released back in 2017, which landed straight at number one in the UK and the US charts and became one of the world's top-ten best-selling albums of the year. The album featured his well-known pop rock ballad ‘Sign of the Times’ and earnt him a number one single in the UK Singles Chart as well. Two years later followed his second album, Fine Line (2019), which also debuted at the top of the US Billboard 200 with the biggest first-week sales by an English male artist in chart history, as well as being listed among Rolling Stone's "500 Greatest Albums of All Time" in 2020. His anthemic single 'Watermelon Sugar', from the album, went on to top the US Billboard Hot 100.

Having just released another chart-topping single ‘As It Was’, Styles gives us a taste of what’s to come with his third full-length album, ‘Harry's House’. While we patiently await the 20th of May to hear the rest of the album, we thought we’d point you towards other artists similar to HS, that are out on the road in 2022, who you can check out and catch on tour!

Alongside Harry Styles, Louis was a former member of One Direction. He released his first solo album, ‘WALLS’ on 31st January 2020, which debuted at #1 in Argentina, Portugal, Mexico and Scotland. It reached the top ten in numerous countries, including the UK, and peaked at #9 on the US Billboard 200 chart.

Louis is currently on his first-ever solo tour and set to release his second album later this year.

The American singer-songwriter and social media personality found fame during his time on YouTube in which he released multiple original songs, with the most famous being 'Idle Town'.

In 2019, Conan officially started to release a series of singles for his debut studio album 'Kid Krow'. Since June 2019, he has released three official singles, with the most notable one being 'Maniac'. Two days before the release of his album, he dropped his third official single 'Wish You Were Sober', with the full album – ‘Kid Krow’ – coming out on 20th March 2020. The album debuted at #5 on the Billboard 200 albums chart and following the commercial success of 'Kid Krow', Apple Music named Conan an "Up Next artist" and released an exclusive mini-documentary about him in April 2020.

The Driver Era, or two brothers, Rocky and Ross Lynch, is an alternative musical duo both former member of pop rock band, R5. In March 2018, the original R5 Instagram and Twitter handles were changed to The Driver Era. On the same day as their social media changes, previews of The Driver Era’s debut single ‘Preacher Man’ were posted on Twitter and Instagram, with Ross announcing the introduction of The Driver Era on Instagram.

Following release, 'Preacher Man' received a huge amount of praise from the alternative/indie music scene and since then the duo have gone on to release a second album – ‘Girlfriend’ – which dropped in October 2021.

You can catch The Driver Era in October as they embark on The Girlfriend Tour, performing in London, Birmingham, Newcastle, and Manchester.

Daughter of film director, J.J. Abrams, Gracie Abrams can be described as an emotional bedroom pop singer with her debut EP, ‘Minor’, released on 14th July 2020 and her second, ‘This Is What It Feels Like’ following less than 18 months later in November 2021. She has been named as an artist to watch by many in the industry and was hailed by Vogue UK as "one of 7 breakout female musicians" in 2020.

Earlier this month, Gracie Abrams released her powerful single, ‘Block me out’ giving us a taste of what’s to come from her debut album, that she’s currently working on.

Having caught the attention of music’s finest like Taylor Swift, Phoebe Bridgers and Post Malone, Abrams has more recently supported Olivia Rodrigo on her 'Sour' tour and is now currently playing her own headline shows across the UK.

Filipino-British singer-songwriter, beabadoobee or Beatrice Laus, started her career writing songs with her guitar, posting tune ‘Coffee’ on YouTube in late 2017. The song quickly gained over 300,000 views and the attention of her current record label Dirty Hit.

She was quick to release her debut EP, ‘Lice’ in March 2018, followed by three more LPs, earning her a spot, on NME’s 2019 list of “essential new artists.” With her debut studio album ‘Fake It Flowers’ dropping not too long later in 2020 - it landed at #8 in the UK Album Charts and Billboard touted her as "The Top New Rock Artist of 2020". With her second album ‘Beatopia’ due to be released later this year, she is currently out on a headline UK tour, so you can grab tickets to see her.