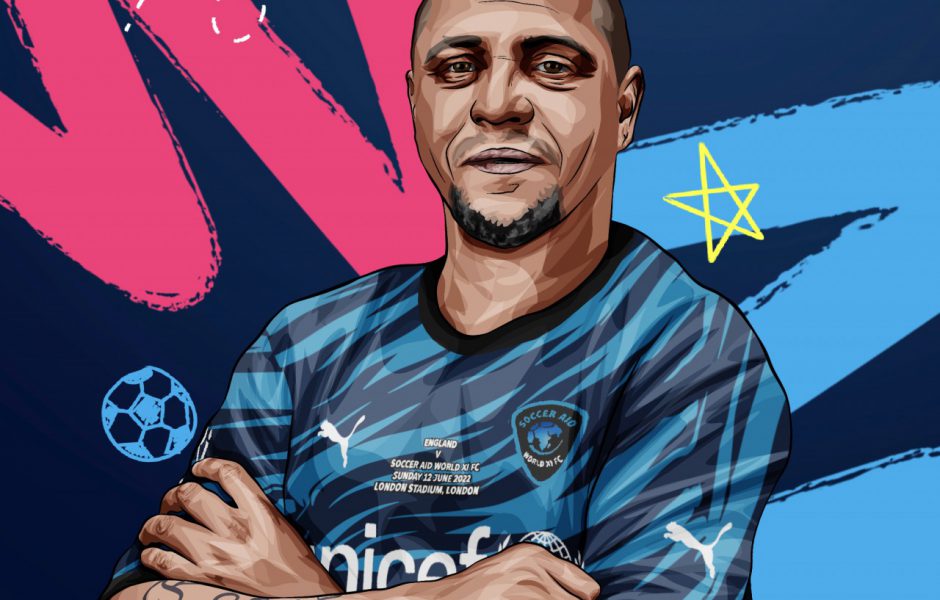 Soccer Aid for UNICEF returns to London next month and once again brings together some of the biggest names in sport, television, music and more for the world's biggest charity football match. Usain Bolt, Liam Payne, Roberto Carlos, Mark Noble, Gary Neville, Carli Lloyd, Tom Grennan and many more famous faces head to the London Stadium on June 12th for what promises to be a hotly contested match. And Robbie Williams takes to the stage for this year’s half time show.

Overseen by Mark Clattenburg (UEFA Champions League final, UEFA Euro 2016, FA Cup Final amongst his honours) and managed by Arsenal legend Arsene Wenger (World XI) and Harry Redknapp (England); Usain Bolt and Sir Mo Farah will both be competing at the London Stadium ten years on from their gold medal heroics at London 2012, it’s shaping up to be one of the biggest events of 2022.

We caught up with former Brazil and Real Madrid superstar Roberto Carlos to talk about what to expect from this year’s Soccer Aid for UNICEF, World Cup 2022 expectations and more!

You’re taking part in Soccer Aid again this year, joined by your old Brazilian teammate Cafu– how much are you looking forward to playing again?

It’s always an amazing experience taking part in Soccer Aid, especially alongside old friends! I am really looking forward to linking up with my captain and friend Cafu!

What will the atmosphere be like at the London Stadium? What can the celebrities expect from a packed crowd?

The atmosphere is always fun and London is a special city, I can’t wait to hear noise from the crowd!

The World XI have won the last three games, can you make it four in a row?

Of course we can!! Playing alongside England is also tough, we are ready for a competitive game!

How important is the experience of the managers (Harry Redknapp & Arsene Wenger) on each side – who has the edge?

Both coaches have great C.V.s and are amazing people.

Who would be your first-choice goalkeeper for Brazil, Alison or Ederson?

They’re both great goalkeepers playing at the very highest level of European football. Brazil are lucky to have two amazing goalkeepers.

Who do you think will win World Cup 2022 in Qatar?

That’s a tough question to answer, it’s’ hard to pick just one. Brazil, France, Germany, Spain, England, Argentina are always big contenders to win the World Cup. Of course I will be cheering for Brazil.

England and Brazil have a lot of exciting players, what players will make the biggest impact?

Both teams have a lot of attacking talent, I look forward to seeing some exciting football during the tournament.

Tickets are selling fast with some sections sold out already! Grab yours here before it is too late.