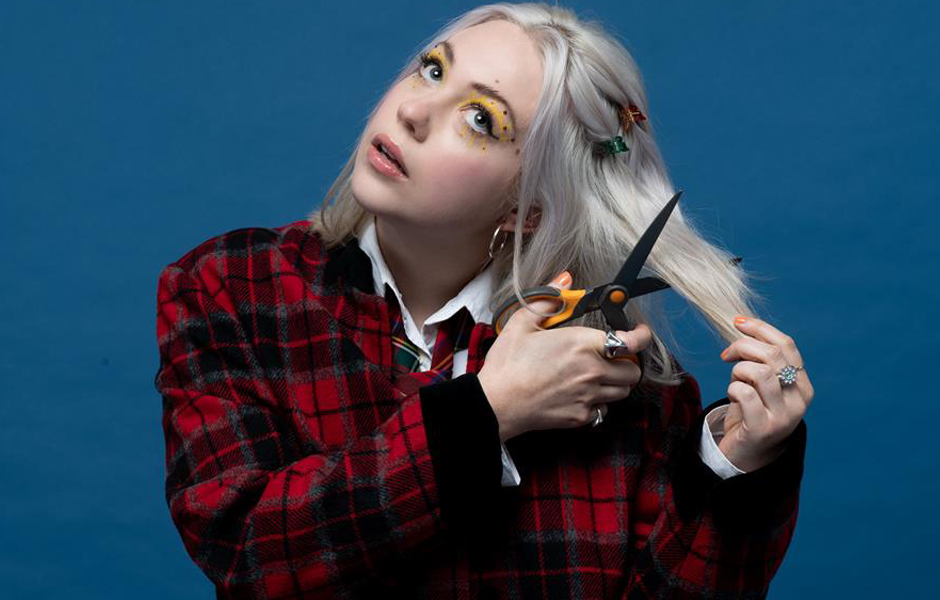 Wet Leg aren't the only sensations to be born out of the Isle of Wight, singer-songwriter Lauran Hibberd is also from the little island off the coast of South England and has been making a name for herself across the industry. Her 'slacker pop' described sound has a punk edged pop appeal, and from her debut single in 2017 'Hunny Is This What Adults Do', up to her most recent single 'I'm Insecure', she has solidified and perfected her sound, with big choruses and witty lyricism throughout.

Ahead of the release of her debut album and upcoming live shows, we had a chat with Lauran about her musical influences, growing up on the Isle of Wight and performing live...

What 3 albums influenced you the most growing up?

From ‘I’m Insecure’ to ‘Sugardaddy’, your lyrics are so self-aware and packed with witty one liners. How do you approach songwriting and where do you seek inspiration?

'I always write from a conversational perspective, so in real life in places I’d lighten up a sentence with a dry comment or a weird joke, I apply the same in songwriting. It’s honestly just how I converse, and how I view life really. Inspirationally I get a lot from just living, when you look up from your phone there’s a lot of stuff to see haha. I write about pretty normal stuff, I’m not trying to change the world or deeply connecting with the universe. I’m just trying to help people get out of their heads and hopefully make them laugh.'

What do you want people to take away from your music?

'Mainly relief. You know when you get home after a long day and you unbutton your jeans and take off your bra. That’s the feeling I’m trying to bottle up. That’s the level of comfort I am trying to achieve musically.'

Which of your songs is your favourite to perform live, and why?

'I love to play Still Running (5K), people always seem bemused at how fast I can talk. It’s also just one of my favourite songs I’ve ever written. It’s everything I’ve always wanted to be, and DJ Lethal of Limp Bizkit features so life goals am I right!?'

We read that you grew up on the Isle Of Wight. What type of influence do you think the Isle of Wight had on your sound and approach to life and music?

'The main reason I picked up a guitar was out of boredom, so I have the Isle of Wight to thank for that haha, I mean that in a nice way. It’s just such a cool place to grow up, and I had such a funny little childhood growing up next door to a dinosaur farm. It really has had a huge impact on the sort of person I am, living here allows me so much space to be creative and being bored brings out weird and odd little characteristics. Passing time by being in bands and playing music is always a great thing. London still scares me.'

Your songs pack such huge powerful choruses that get stuck in your head on repeat and we can’t help thinking they must be so much fun to perform live. Is performing to a crowd something you consider during the creation process of your songs?

'Not so much at the start but definitely now, it adds that extra bit of satisfaction to writing. It’s like double the reward, so I just wrote a song I love and oh my god this is how it will be live, and this is where the crowd will sing, and this is where i’ll do some high kicks, oh and this is where I’ll catch my breath. Playing live is the worlds biggest pay off.'

You had the chance to work with producer Suzy Shinn on your 2021 EP ‘Goober’, who has produced for the likes of Panic! At The Disco, Fall Out Boy and Weezer. What was your experience like working with her on this project? And are there any other producers out there you’d love to work with?

'It was AWESOME. She’s so cool it kind of makes me question if she’s real. It really helped me in the lockdown process, building a relationship with her and working on the EP around the clock. I worked with Larry Hibbit on my debut record, he is also the coolest man alive. It is like guitar heaven with him. I’d love to work with Jay Joyce and Zakk Cervini also.'

If someone had never heard your music before, what is the one song you would recommend they listen to and why?

'I’d probably go for ‘Bleugh’. I think if you don’t like that song, I’m probably not for you. Hearing it back after the first mix I remember feeling like, this is just me and everything I have ever loved musically in under 3 minutes. Also, I just love hearing how different people pronounce the song title. Making a sick noise out of context has become my favourite thing ever. So yeah, bleugh!'

We cannot wait to hear your debut album when its released later this summer. How does it feel to be releasing your debut album, and why did now feel like the right time?

'It feels like a good balance between mad excitement and existential nerves. I didn’t want to wait any longer to make an album, I had it written and I already loved it so I didn’t want to put it on hold until I was ‘ready’. I don’t think you are ever ready. All I knew was that I wanted to write another as soon as I’d finished. So I just figured I have a lot of songs left in me and I may as well start getting them out now. It’s a great feeling, and something I’m dying to share now so yeah August 19th could not come quick enough.'

We’re looking forward to catching you at Neighbourhood Festival in Manchester later this year, plus you're heading out on your own headline tour which is exciting. What are you most looking forward to about getting on the road and in front of a crowd?

'Just playing the NEW songs, and building a set list longer than 30 minutes!! It’s honestly so fun playing your own shows, making the rules feels good. I also get to do my comedy set un rushed in between so that’s a bonus for everyone! I can’t wait to see you at Neighbourhood, it’s gunna be so good!'