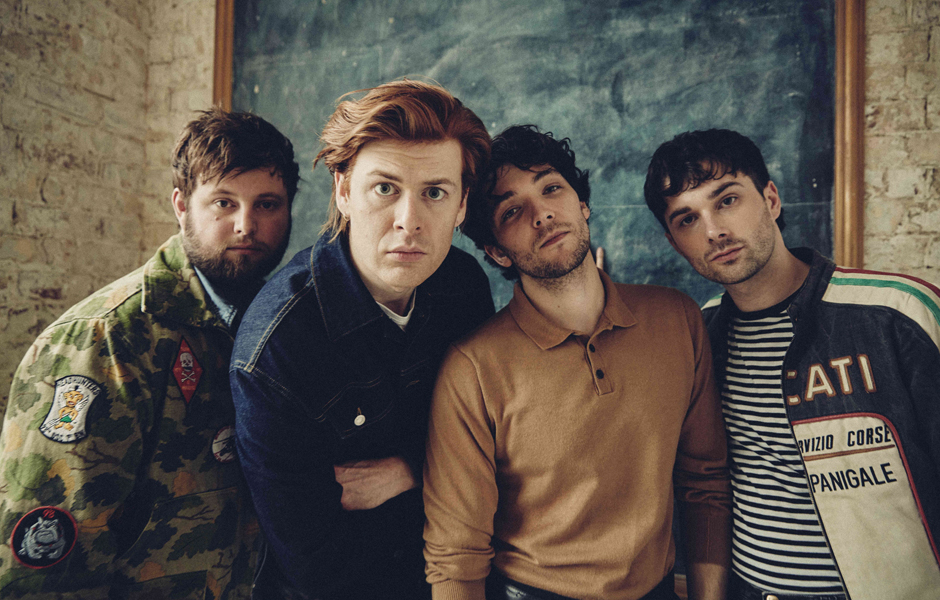 Since the release of their debut album back in 2017, The Amazons have been a household name of the alt-rock scene and responsible for some of the biggest anthems of the past half-a-decade.

Now on the verge of releasing third LP 'How Will I Know if Heaven Will Find Me?' and touring across the UK in support of the record, we caught up with frontman Matthew Thomson to talk about how they've adapted to life of the road, collaborating for the first time and more!

Firstly - you have a huge headline tour coming up later this year. Can you explain the feeling of what it means to once again be preparing for live shows?

It's like I am a fish that has been out of the water and sat on a beach gasping for air. Right now I'm just looking at the waves glistening in the sun, in the sense that I am desperate to jump back in!

You played a few shows with Royal Blood not too long ago – were these a good way to ease yourselves back in or was it a bit nerve wracking after a bit of time off the stage?

We thought the latter was going to be the case so we just kind of jumped in and hoped it was all going to be ok! For the first couple of shows we thought that we’d be rusty, but before long it was like we’d never been away and then we got tired and sick! We remembered that touring isn't that easy if you don't look after yourself, so we had to relearn the tricks of the trade as we went along! It was quite overwhelming to play to that many people every single night after not really seeing anyone for a while, but the overriding sense was gratitude to the whole situation and to the Royal Blood guys just for taking us out.

You mention the ‘tricks of the trade’ there – after so long as a touring band do these now come naturally or do you still have to wing it a bit at the beginning of the tour?

There's always elements of learning on the job every single time! For a while there was a Groundhog Day nature to some of the decisions we made, but now I'd say we drink a little less than before because we started to feel the repercussions of playing a radio session hungover and we don’t really want to do that. Ultimately bad living gets in the way of doing our thing to the best of our ability and we can still have a good time on tour by treating our bodies a bit better!

The shows later in the year are in support of your upcoming record, ‘How Will I Know If Heaven Will Find Me?’ – what can fans expect from it?

It is an interesting one because it was written over a couple of years and consequently, when you write something over a prolonged period of time, you go down so many different rabbit holes. There are different phases and chapters throughout, so it was almost like our debut album in that way. There’s a lot of range to what we do and we were never going to be satisfied to keep on playing the same kind of sound.

I would say it is an evolution on anything we've done before and more experimental within the parameters of what we want to sound like, rather than experimental parameters that you can expect from black midi.

Jim Abbiss (Arctic Monkeys, Adele), Jamie Hartman (Lewis Capaldi, Celeste) and even Maggie Rogers were involved in the creation of the record – do you think that working with these people changed the direction more than you had originally planned?

That's an interesting question! I think that now we've opened up the door and entered this room, the way we do things and how we write records in the future will be changed because we enjoyed it so much!

It was a wholly positive thing and something we quickly realised was inevitable because we've been around long enough to culminate and grow relationships. We first hung out with Maggie in 2017 after a chance meeting at Glastonbury. A few months later we both played Fuji Rock in Japan and the relationship has grown since then. When it came to her involvement on the new record, it wasn't like ‘hey, let's sit down and write a song together’ or anything like that - it was more about ‘I've had this idea for ages, and I don't know what to do with it’ and she instantly came up with a melody and completely opened up the dead end I was at! Having her on hand completely blasted open the doors and subsequently I was and continue to be inspired by her involvement!

Do you feel like you will intentionally move towards collaborating on future records, or will it be more of a ‘the option is there if we need it’ situation?

I think that we can't not keep our door open now if that makes sense? I'm excited to see where that takes us and the moves we make because I love bands that keep the door open – whether it's U2 and Brian Eno or Arcade Fire and David Bowie, it is clear that they keep coming up with new stuff and I’d argue that’s down to them keeping the door open.

As you continue to develop as a band and release more records, does it become gradually more difficult to curate a setlist that keeps both yourselves and the fans happy?

Yes I think so, but this is the album we want to play the most from if I'm honest. When we released the debut record we only had one album to play so it was easy, but this is the first time we struggled because selfishly we could just play the whole new record and it would be a great show. There’s such a range of different sounds and you can really create a dynamic show so for that reason I think it will lean fairly heavily on the new album.

Saying that, we obviously find so much joy in playing the old stuff and having a connection with the audience. They have relationships with the songs they know and want to hear them live – it is always fun to see how people react and how songs like ‘Junk Food Forever’, ‘Black Magic’ and ‘In My Mind’ have grown over the years. We need to ask ourselves ‘why wouldn’t we play them’ when we want that connection with the audience to continue!

Apart from the album and tour, what else can we expect from The Amazons across the rest of 2022 and beyond?

To be honest, I’d say more music! I would never say that before – especially when our ‘new’ record isn’t out yet – but this time around we were writing so much material that we almost didn’t stop. There are plenty of songs that didn’t make it onto this record so maybe we’ll look back on those, but until then just more touring!

Tickets are on sale now for The Amazons' tour later this year - grab yours here.