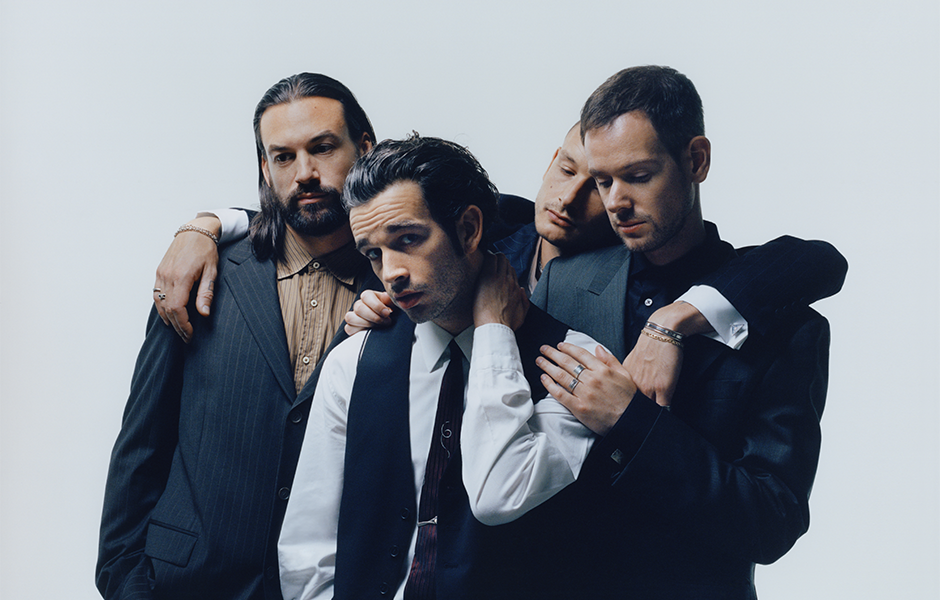 Two years on from 'Notes On A Conditional Form', The 1975's fourth consecutive album to reach number one in the UK Albums Chart, the pop/rock powerhouses are back, announcing a shiny brand new album 'Being Funny In A Foreign Language' set to release in October 2022, followed by a UK tour. Coming off the back of headline performances at Reading and Leeds and the latest single 'I'm In Love With You' The 1975 are on a roll, and that is why we're making them our Artist of the Month! Come with us as we take a dive into the band's career and iconic discography.

The 1975 have been making music together since the age of 15, cutting their teeth playing punk music in a local club with Matty Healy starting out as the drummer before taking over vocals when the original vocalist left to form another band (this band went on to be indie rock favourites Editors!) With Healy now as lead vocalist, George Daniel was recruited as drummer to complete the line-up.

The band also have been through their share of names, originally performing under 'Me and You Versus Them', 'Forever Drawing Six', 'Talkhouse', 'the Slowdown', 'Bigsleep', and 'Drive Like I Do', before settling on The 1975. A name change described by Matty as being inspired by 'mental' scribblings on the back page of the book 'On the Road' by Jack Kerouac that were dated to '1 June, The 1975'.

Prior to the release of their self titled debut album, The 1975 released four EPs and toured extensively to build up hype and recognition.

Releasing four EPs during the wait for their debut album proved successful. The band's first EP 'Facedown' awarded them with their first UK airplay on national radio with lead track 'The City', also being featured on BBC Introducing with Huw Stephens on BBC Radio 1.

They were once again featured on national radio when championed by Zane Lowe for their single 'Sex' from EP of the same name.

Upon the release of their third EP 'Music for Cars', The 1975 found well deserved mainstream success with featured single 'Chocolate'. They released their fourth and final EP, appropriately titled 'IV' before dropping the full debut album on 2nd September, 2013.

The 1975's debut album was recorded with Mike Crossey who also worked with Arctic Monkeys on their debut single, so the band were in safe hands from the start. The album can be placed under the indie rock umbrella, but that's not to say that it isn't diverse. A wide variety of influences and genres can be heard in the 16 tracks including electropop, emo and funk. Healy specifically has cited Michael Jackson as an influence and this can be heard in the unmistakable 80s aesthetic that The 1975 feel so at home with.

The album topped the UK Albums Chart on 8th September, selling over 31,000 copies in its first week! By 2014 the album was certified platinum.

I Like It When You Sleep, for You Are So Beautiful yet So Unaware of It

The first sign something else was brewing in the band's career came in June 2015 when each of their social media accounts were deleted. Speculations ranged from a breakup to new music. Thankfully, the latter was correct with the band announcing their second studio album 'I Like It When You Sleep, for You Are So Beautiful yet So Unaware of It', premiering the lead single 'Love Me' along with tours in Europe, Asia and North America.

The 1975 expanded on their 80's influence from their debut album, borrowing elements of 80s music, incorporating synths to create a retro atmosphere.

The album received positive reviews with NME naming it their album of the year in 2016 and praising its scope and ambition. Music journalist for The Guardian Alexis Petridis particularly noted Matty Healy's sharp observations and witty self-awareness.

A Brief Inquiry into Online Relationships

The next chapter of The 1975's career was kickstarted with the premiere of 'Give Yourself a Try' as Annie Mac's 'Hottest Record in the World' on BBC Radio 1.

This was the band's first concept album, as they turned their attention towards society's relationship with technology and the role of digital communication and the internet.

Once again, the album garnered universal praise from critics. If previous albums are known by their 80s aesthetic, 'A Brief Inquiry into Online Relationships' can be characterised by a turn towards electronica, matching the overarching themes within the album. These include a tropical house beat and synths on 'TooTimeTooTimeTooTime', glitchy sounding electronics on 'How To Draw / Petrichor' and even a spoken word performed by Siri, telling the story of a man who retreated from society and fell in love with the internet.

A Brief Inquiry into Online Relationships won British Album of the Year at the 2019 Brit Awards further cementing The 1975's place in the contemporary pop/rock circle.

Notes on a Conditional Form

Originally titled 'Music for Cars', 'Notes on a Conditional Form' was at first intended as the follow-up to 'I Like It When You Sleep, for You Are So Beautiful yet So Unaware of It'. It instead came as the second half of the 'Music for Cars' era, spanning two albums. The first half being 'A Brief Inquiry into Online Relationships'.

Once again the band further push the boundaries of genre, building on the experimentation of their previous album, shapeshifting between genres and eras.

Similarly to their previous album, 'Notes on a Conditional Form' focuses on the intricacies of human existence, and prioritises introspection and storytelling, with many critics labelling it as The 1975's most personal album yet.

Being Funny in a Foreign Language

In February 2022 the band once again deactivated their social media accounts, indicating that something new was on the horizon. The first single 'Part of the Band' was released early July 2022, followed up by 'Happiness' a month later.

The electronic elements of their 'Music for Cars' era have been replaced by a strong instrumental presence, dialling up the presence of live instruments including violins, saxophones, funky guitars and groovy basslines, making for new music that we can't wait to see live.

Their upcoming tour is titled 'The 1975: At Their Very Best' and we'd definitely be inclined to agree!

If you missed them at Reading and Leeds you can catch them on their UK tour January 2023! Don’t miss out, grab yours now.