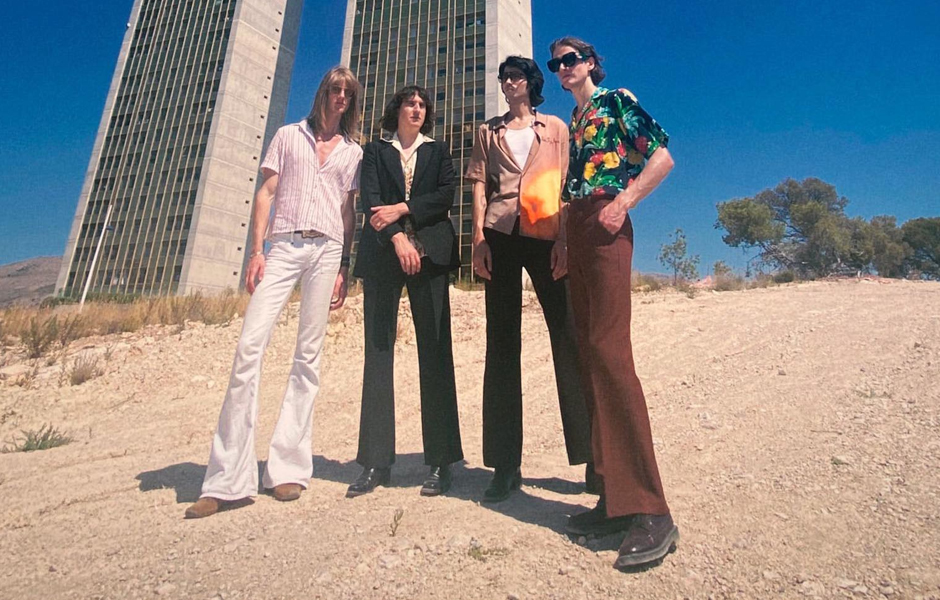 Almost a decade on since their breakthrough debut album, Temples have announced their return with a brand new album 'Exotico', and a run of intimate UK shows in celebration of Independent Venue Week in February.

We caught up with frontman James Bagshaw to discuss the past ten years, what to expect from the band across 2023 and more.

You’ve just announced your new record ‘Exotico’ and have some shows lined up – how does it feel to get that sorted early and have the whole of 2023 to work with?

It feels very liberating, to be honest, because we've been working on new material for a while now. At one point we did consider doing some touring in the tail end of 2022, but after much deliberation we thought we’d save it for a fresh year. It felt like it deserved us waiting until January and hopefully it helps to lift people’s spirits.

The shows actually come a couple of months before ‘Exotico’ – is this an opportunity to road test the material, or is it more about getting back into the swing of touring again?

At the moment it is all up in the air. We’re rehearsing next week and I’m still not too sure what we’re going to do. There will definitely be some new songs in the setlist, but it all depends on how good we can make them sound with only a couple weeks to rehearse them. The shows won’t be like anything we’ve done before, so there’s something different for anyone that has seen us before. We are trying to incorporate some other aspects into the live show so it will be really interesting to see it come together.

I remember way back in 2014 on the ‘Sun Structures’ tour you had an incredible production – is this element of the show something that has added pressure, or do you feel it is more exciting to keep fresh?

That really worked for that period of time, and of course we’re always trying to create something at a live show. We’d love to do a ridiculous production, but with these shows being part of Independent Venue Week it doesn’t really work. These dates will be more about the rawness of playing live so sadly no pyro or fireworks – but maybe we’ll make some homemade, indoor fireworks between now and the first show.

The IVW shows are naturally quite intimate – do you look forward to these kind of shows more than say programming a huge tour in big rooms?

We can’t predict it, really! It has been three years since we’ve toured properly, but we played some European festivals and a couple of random UK dates last year. There are going to be some new people on the scene that might want to hear the older stuff, and likewise there are people that came out to see us last time and have since become parents so can’t make it this time around. We can’t draw a line with our fans and say this is how it is going to be for definite, so it is exciting for us to be back putting the groundwork into pushing the shows and hoping they sell out.

You mention that it has been a while since Temples have toured properly – does spending so long on the road ever become normality, or is it still quite surreal to be travelling all over the world playing your craft?

I’d say it is a mixture of both. I know that isn’t a good answer, but there’s always an adjustment when you come back from tour where you do ‘normal’ things like going to the post office and you realise you’re in a bit of a grace period. The past few years have been like an extended grace period if that makes sense? We’ve sat down a few times since the last tour and talked about playing some shows to get us back into the swing of things so it isn’t such a culture shock, but for whatever reason we didn’t and our first show back ended up being a festival in Spain in front of 50,000 people. We played just before Christina Aguilera and Franz Ferdinand were also on the line-up, and in hindsight it was a good idea to just dive back in the deep end.

Similarly, it has been nearly a decade since ‘Sun Structures’ was released. Has the past 10 years flown by from your perspective?

It has definitely been a whirlwind! We’ve been lucky to have seen so much, especially in the cutting your teeth period around our first album where we basically said yes to everything. There was a period around 2014 and 2015 when we were trying to push ‘Sun Structures’ and had a maximum of four weeks off at a time and then we’d be back on the road. Before the last few years we didn’t really have any time off because we’d either be touring or writing the records, so it certainly feels like it has flown by.

Apart from rehearsing, the IVW tour and the release of ‘Exotico’ – what else do you have in store for 2023?

‘Exotico’ is the first double LP we’ve worked on so a lot of time will be spent working on how to perform it live. We recorded it with Sean Lennon and it was all very fragmented in a creative way, so it will be interesting to see where we go with that. It sounds cliché but I’d say ‘Exotico’ is our first genre-less album and our most captivating to date – there will be people that expect us to go down the ‘60s route again like ‘Sun Structures’ but there is a real hip-hop influence in a Wu Tang Clan kind of way.

Final tickets for Temples' shows across February are on sale now.