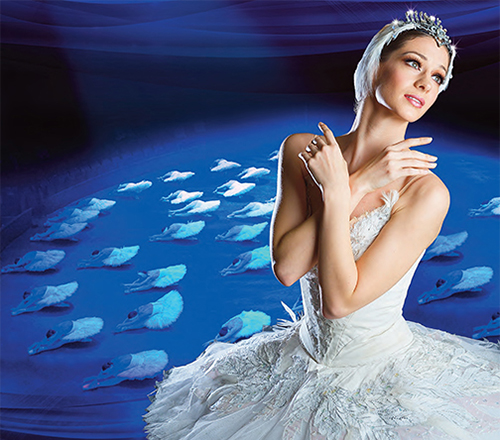 Derek Deane’s Swan Lake
From the 1st-12th of June the Royal Albert Hall will play host to Derek Deane’s captivating production of Swan Lake. Deane debuted his version of Swan Lake in-the-round all the way back in 1997 and has dazzled audiences many times over the last 19 years, with over 500,000 people having witnessed this spectacular event.

When first staged it was critically acclaimed for its style. The intensity of having an endless supply of dancers in such close proxemics to the audience, and the general scale of the performance, was mind-blowing. It’s one of the reasons it is constantly being revived.

Over the years, there have been numerous other adaptations to this classic ballet, leading to some very different outcomes in terms of style. Here’s three particularly interesting takes on the well-known story, one from each decade.

1995
1995 brought about Matthew Bourne’s production of Swan Lake. You might recognise it from Billy Elliot as it is the production young Billy grows up to perform in. The traditional story of Swan Lake and music remain the same with beautiful choreography to accompany it. The real difference is the choice to have the role of the Swans performed by male dancers. This decision caused audiences to question the intentions behind the decision - was it an interrogation of gender roles/sexuality on the stage? Who knows, whatever it was, it was clearly the right decision because it is still being revived.

2002
In 2002, Jan Fabre brought Swan Lake to life in a more shocking and graphic light. The dance opens with the skeleton of a swan in the corner of the stage and that’s only the start of the symbolic nature of the play. Each section opens with an owl present, staring at the audience. Knights, dressed in full suits of armour cry and wring their handkerchiefs into the lake.

The performance left audiences in awe and confusion, and when asked, Fabre revealed that his focus had been the theme of death. The show was performed by the Royal Ballet of Flanders and featured at the Edinburgh Fringe Festival.

2013
In 2013 Fredrik Rydman gave Swan Lake an extremely modern re-vamp. The biggest change was the style of dance, instead of it being the classic ballet, the dancers were trained in street-dance.

Pirouettes turned to head-stand spins, swans became prostitutes who “inject heroine”, and projections and costumes brought the show into the modern age. This renewed, gritty take on the ballet was a hit and even had a run at the Coliseum Theatre. Check out the trailer below.

2016
Now is your chance to see Derek Deane's fascinating in-the-round take on the classic ballet, which enables you to enjoy the show from almost any vantage point in the Royal Albert Hall and has received rave reviews across the board.

"60 swans, blue light, foaming mist from the dry ice machine, von Rothbart appearing from a trapdoor… acrobats, jugglers, an assured performance of the score…The public is nowhere cheated, and nor is Swan Lake… splendid"
Financial Times

I am disappointed that there is no mention of Australian Graeme Murphy's choreography of "Swan Lake" (coming to the London Coliseum in mid-July) which is a marvellous rendition of the Princess Diana and Camilla story for Odette and Odile and Prince Charles as, well, the Prince. Exceptionally gorgeous choreography.

I agree with Carmel. Graeme Murphy is an Australian choreographer of great note, and I will go to his production when i am in London in July!

Hi there, thanks for getting in touch. There's no doubting that Graeme Murphy's Swan Lake is also fantastic, we also sell for this spectacular show at: https://www.seetickets.com/tour/graeme-murphy-s-swan-lake We’ve focussed on Derek Deane's version this time because it is showing sooner and we wanted to look at some of the more "unusual" performances of Swan Lake - one from each decade. We’ve been promoting Graeme Murphy's Swan Lake on our social media channels (@seetheatre) so it hasn’t been left out. If you do see either of these shows we’d love to hear what you think of them. Many thanks, the See Theatre Team.