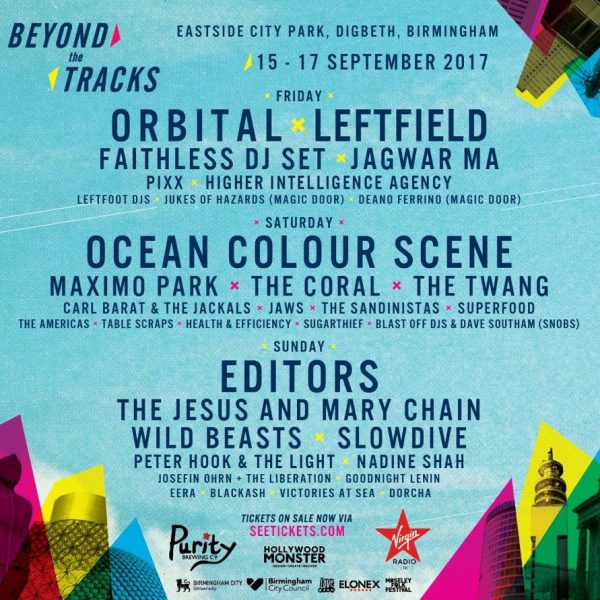 Set in the second biggest city in the UK, Beyond The Tracks is bringing three days of live music to Birmingham. From bands such as The Coral and Maximo Park to a DJ set by Faithless, it may be their first year,but they’re kicking off with a bang.

We caught up with John Fell, Festival Manager at Beyond the Tracks to get his thoughts.

Beyond the Tracks is a brand new festival – where did the idea come from and how did you set about curating the line-up?

We have been curating and promoting festivals within the Birmingham region for 12 years now and we’re always looking for new exciting festivals for the city. We hosted Ocean Colour Scene’s 20th anniversary of 'Moseley Shoals' last year in Moseley Park and the shows were a roaring success with both nights selling out. We wanted to create something for Birmingham’s city centre to become the flagship event so the natural start was Ocean Colour Scene. We decided to build an unmissable indie line up for the Saturday. We decided it would be cool to curate three independent days musically and focus on some other genres. We were delighted to curate an Electronica night with Orbital, Leftfield playing 'Leftism' in its entirety, Faithless (DJ Set) & a Post Punk shoegazing Sunday night with Editors, The Jesus and Mary Chain, Slowdive plus many more each day.

You’ve bagged some awesome artists (Orbital, Maximo Park, Faithless) but which ones are you personally excited about?

I think musically the Sunday really ticks the box for me. To have Slowdive playing is a great coup for the festival in the first year. Editors and The Jesus and Mary Chain should be awesome plus the legendary Peter Hook on the bill! I can’t wait to meet him. That said, Friday & Saturday night will be incredible parties!

As well as the impressive line-up, what else can attendees expect to enjoy during the weekend?

Well, first of all the bar! We have hosted Ocean Colour Scene and The Twang and those crowds like to drink! We’re bringing in extra bar space and drinks for this event to sit alongside our Street Food village provided by Digbeth Dining. We will also have a little trader village, fairground rides, face painting etc. Whilst aimed at the older audience the event will welcome families.

The festival is in central Birmingham, do you expect it to be attended mainly by local people or are people from out of town showing a lot of interest too?

Our initial intention is always the Birmingham and surrounding areas crowd as they are on our doorstep but with all our events we get people from all over the world. It is amazing to see how many people are travelling in from USA, Japan, China, Australia. We have also had a huge amount of Bristol, London, Manchester fans heading down/up. It should be a great mix of people making an awesome atmosphere.

What do you see in the future for Beyond the Tracks after 2017?

At the moment, our focus is to make sure we deliver a successful first year. In the long-term, I guess we want to create something unique and special for the city for years to come.

Beyond the Tracks tickets are on sale now!

I placed an order for this event on Sat 16th Sept. I'm yet to receive a email confirming my order but the money has been taken out of my account 4 times???