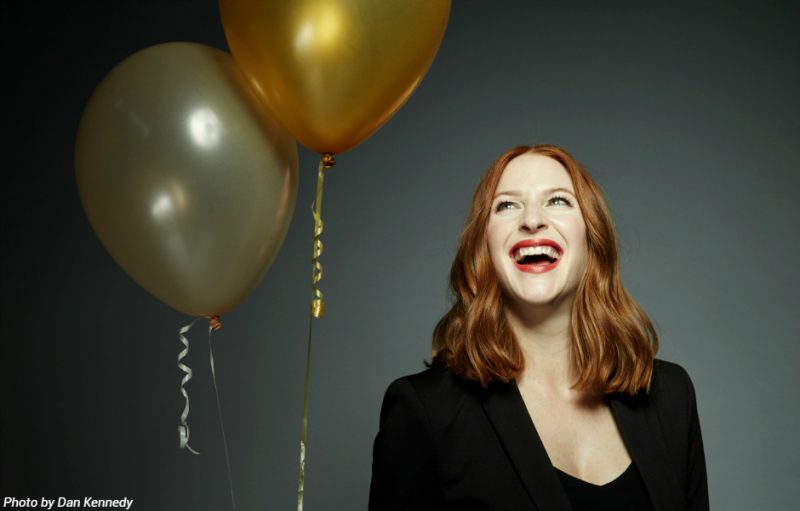 Marianne Elliott - as part of her new company, Elliott & Harper Productions - will direct Rosalie Craig and Patti LuPone in the iconic musical, with the lead role of 'Bobby' re-imagined for the first time as a 35-year-old woman.

Craig, who grew up in Nottingham and attended a community drama college there before attending Rose Bruford College in Kent, will play 'Bobbi' in the gender-swapped musical masterpiece, a role she sees as "intensely exciting".

In 2013, Craig received the Evening Standard Award for Best Performance in a Musical for her gravity-defying turn in Tori Amos’ The Light Princess (also directed by Marianne Elliott) at the National Theatre, a space that's become a favourite stomping ground. In fact, when we sit down to chat about what's next for the 36-year-old actor, she's fresh off the back of playing Polly Peachum in a bold new production of The Threepenny Opera at the NT's Olivier.

So, what does the future hold, and how is the leading lady feeling about her upcoming tear-up-the-rule-book part in Sondheim's musical comedy about life, love and marriage? We grabbed 15 minutes with Craig to find out... How does it feel to be the person breathing new life into the role of Bobbi/Bobby?


Intensely exciting, from so many different perspectives. I’m excited beyond belief about doing this production – I’ve done Company before, but it’s just being able to actually play this part. I think from a non-gender specific slant I’m just really, really, really excited about playing Bobbi and getting the chance to sing the music and play the role.

One of the things I’m even more excited about is the fact that we’re having this conversation - through Bobbi being a 35-year-old woman, and not a man - about the society we live in today. We're able to talk about what it means to be a 35-year-old career driven woman, and why that's seen as negative. Should you want other things? Why do your friends want other things for you? Why does it make you feel nervous if you don’t want to be married or have a baby? We're able to ask a very 'here and now' question.

We're at a time at which it feels like we’re on the cusp of a power shift across theatre and the arts, to more female roles and more women in important positions in theatre – is that something that's important to you?

I think we have lots of male roles, which is why sometimes it’s good to have a gender-swap. It brings a piece which normally can be viewed as a period piece, such as Company, which is very, very steeped in the 70s with the views being very male, up to the here and now. It modernises it completely. The production is coming from new company Elliott & Harper, meaning you get to work with Marianne Elliott again. How did she approach you about the role?

I was standing in the canteen at 'the National', and Marianne came up to me – and we’re like two children when we see each other, all excitement and giggles – and she said "can I talk to you about something? What do you think about the idea of Bobbie in Company being a woman?"

I sort of said "OK, sure", and we went away and thought about it. Then we just kept having these conversations, meeting up there, having coffee and talking about it, going through the script and the songs.

Then, about a month later, I said to Marianne "who are you going to get to play Bobbi? It’s an amazing part", and she was just like "YOU! Obviously, YOU! That’s why I’m talking to you!"

I genuinely thought – because she’s a woman who loves to research, she steeps herself in things and would never put her hand to anything she didn’t feel was worth it – that she was asking me from the perspective of me having done the piece before, but instead she was talking to me as in 'if it happens.'

Around that whole time, of course, it was just 'if'. We never thought that Sondheim would go for it, and we realised that that was going to be a big mountain to climb, but he agreed. So we have his blessing, which is huge really.

And you're going to be playing against Patti LuPone, which is quite the prospect...

It's exciting...I think it's exciting for London to have Patti here, and it's so brilliant that she's agreed to come and do this. I know she was saying after her last show on Broadway that she wasn't going to be in a musical again, but I think you can't really say no to Marianne Elliott. I'm really looking forward to working with her. You, like Patti, have bounced a lot between plays and musical theatre - do you have a preference, or ever think 'I've done a play so now I should do a musical'? Or do you just go 'I love that, I want to do it'?

Sometimes I do think 'I really want to do a play now' or visa-versa, and I think by the time Company comes around I'll be really ready to do a musical. I love doing it, I love singing, but I equally love not singing. I think both of them for me are the same artform.

They feel the same when you do them. I mean, when you do a musical you have to actually look after yourself a bit more, so doing a play is a bit like 'oh I don't have to worry if I can't sing today', but I just really hope that I can continue to do both, because I think they're both wonderful in different ways.

And I suppose that flexibility is a way of surviving in this industry, especially as - in this industry - the number of roles available tends to get smaller as you progress through your career...

Absolutely - it's a survival game being an actor, it really is. Whether you're at the top or middle or the bottom. There are a lot of us, and there aren't parts for all of us all of the time, so I think you have to just do as much work as you can.

I'm a great believer in working and diversity in work, and I feel pleased that I can do both and long may it continue, otherwise I'll be sat at home twiddling my thumbs!

Read more: Rosalie Craig to join the cast of Jez Butterworth's The Ferryman

Before Company comes Christmas - what does a Rosalie Craig Christmas look like with you, your husband Hadley Fraser and the little one?

I love it! I absolutely love Christmas. I get really excited. I just love the whole thing. I feel like everyone - especially in London - is a bit nicer, everyone's a bit friendlier...apart from if you go shopping.

I just love the whole vibe surrounding Christmas, and I think family is the most important thing we all have if we're lucky enough to have it, so it's a really good time to go home, especially now I've got the baby, and celebrate all together. This year particularly, now she's a bit older, it will be a really fun time. I was saying to my Dad the other day that we can actually do the 'leaving out the carrots and mince pies' and he was like "oh my god Rosie?!", and couldn't get over how excited I was for it all.

But yeah, it's about making it magical for her now, and passing on these little traditions and things like that. I'm really looking forward to it.

And finally, what would be your top three musical numbers?

OUT OF ALL OF THEM?!?! Oh gosh...To be honest with you, I listen to a lot of jazz. I don't really listen to musicals much...it's a bit of busman's holiday maybe.

I'd hands-down have to say Being Alive (Company), it's an astonishing piece of writing. I'm a bit of a secret listener to London Road, and I shouldn't say that because I was in it! But I don't listen to myself doing it, I listen to other people's songs...just because I like listening to it. I love listening to Adam Cork's work and just understanding how that came together.

Aaaand y'know what, just a big old show tune...sometimes you just can't beat a big, fat show tune and production number and just putting it on, dancing around and singing at the top of your voice, and there's just too many to choose from really... Company, starring Rosalie Craig as Bobbi and Tony and Olivier Award-winner Patti LuPone as Joanne, opens in September 2018 at the Gielgud Theatre for a strictly limited season, with tickets on sale HERE.

There are no comments"