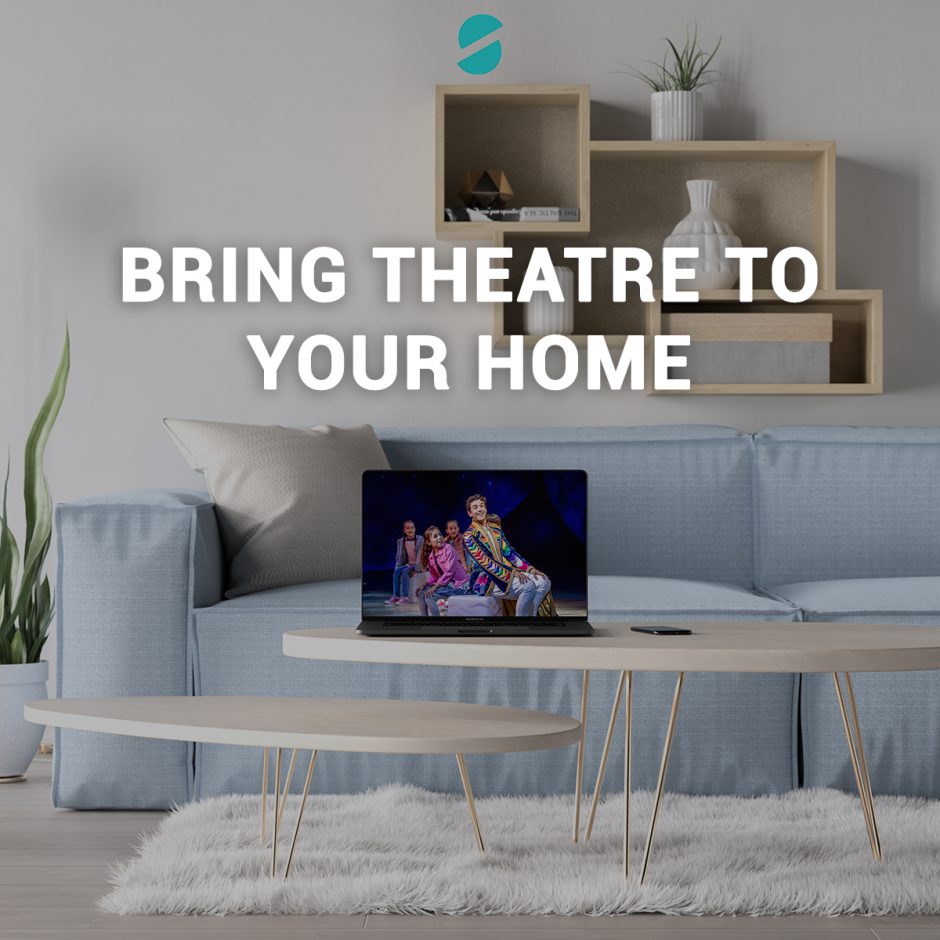 Missing theatre already? Don't worry as we've got you covered with our weekly, theatre at home list! Here's our selection of great theatre to watch online which will keep you busy while you're stuck at home. (Added bonus: you don't even have to get out of your PJ's).

Watch some of the very best British theatre from the comfort of your own living room with National Theatre Live. Expect classic masterpieces such as the innovative re-imagining of Charlotte Bronte's Jane Eyre (available to watch until 16 April); and coming up, Polly Findlay's acclaimed production of Treasure Island premiering this evening (16 April) for free.

The Shows Must Go On: Andrew Lloyd Webber's Live Streams

For the next seven weeks, theatre legend Andrew Lloyd Webber will be streaming his well-loved musicals as part of his The Shows Must Go On series. Subscribe now to enjoy full length performances every Friday evening from 7pm. Shows include Jesus Christ Superstar, The Phantom Of The Opera and more!

It was the play and TV adaptation we couldn't get enough of in 2019, with theatre performances selling out instantly and live cinema screenings packed across the country. But if you didn't get chance to experience Waller-Bridge's incredible play Fleabag the first time around, you can access the live stream for as little as £4 today on Soho Theatre's On Demand site or Amazon Prime. All proceeds will go towards theatre workers affected by the current climate, such as charities

All the Web’s A Stage

Theatre Together, a new collective of over 50 artists and professionals, announce All the Web’s a Stage an online event featuring a variety of live performances to raise money for those in the arts facing hardship as a result of the Coronavirus pandemic. The event will feature a curated programme across a variety of live performance disciplines such as cabaret, comedy, dance and theatre. Those taking part include Danny Mac, Tom Milner, Jodie Prenger and La Voix. For artists or other professionals interested in taking part please contact: allthewebsastage@gmail.com

The well-meaning amateurs of the Cornley Drama Society perform a half-hour play - live! - on BBC1 : a horror story, a wartime drama, a legal thriller, a period romance, a deep south melodrama and a Christmas fable. And every time, the performance goes terribly, terribly wrong. Sets collapse, special effects fail and the studio audience are threatened. But the show must go on… Comedy series from the team behind The Play That Goes Wrong.

From the best movie musicals to amazing documentaries to classic concert films, these shows and blockbusters will keep adults and kids alike entertained. Including favourites like Rock of Ages, Les Misérables, Annie, Fiddler On The Roof and more.

Unprecedented: Real Time Theatre From a State of Isolation

When? Available to watch online from April

Where?: More info to come here

A group of playwrights, directors and actors including Jasmine Lee-Jones, James Graham, Duncan Macmillan and Clint Dyer  are taking part in Headlong theatre’s new online season. It will be a new series created together with Century Films in response to the coronavirus crisis which will see playwrights create works about how our understanding of life is changing, focusing on themes such as family, work, education, community and culture. Each piece will be performed by actors in isolation and broadcast using online conferencing technology, combining both live and pre-recorded material.

Digital Theatre is an incredible platform that gives exclusive unlimited access to the worlds finest theatre productions. Subscribe or rent from the comfort of your own home.

Commissioned by The Space, this film of Cyprus Avenue,by David Ireland, mixes live capture of performance from the iconic Royal Court Theatre stage production with location shooting in Belfast. It was first broadcast in September on BBC Four. This is the first time the film will be available internationally.

As part of their Hampstead Theatre at Home series, this London state-of-the-art theatre is bringing three plays to your home during this period. Having previously streamed plays Wild and Wonderland, the third and final of the series, Drawing The Line, is the sweeping epic directed by Howard Davies that's available to watch for free until 19 April.

Celebrating 25 years of Disney on Broadway, this must-watch live stream will feature Disney classics and favourites such as Hercules, Aladdin, The Little Mermaid, Beauty and The Beast, Mary Poppins and lots more! Raising money for Broadway's COVID-19 Emergency Assistance Fund, the live stream will be available to watch from Saturday 18 April.

Keep up to date with your Theatre news, priority bookings and exclusive offers from See Tickets: