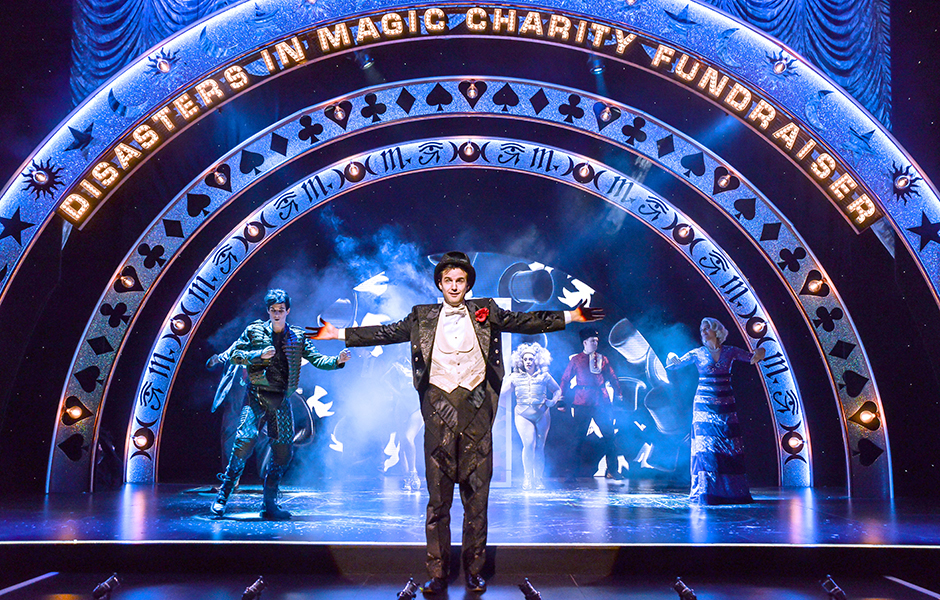 Magic Goes Wrong is the new Mischief Comedy show that has been taking the West End by storm. Since appearing in the Vaudeville Theatre from December 2019, the show has been nominated for the Best Entertainment or Comedy Play category, for this year’s Olivier Awards.

We were lucky enough to have one of the writers and company director, Johnathan Sayer answer our Magic Goes Wrong questions in this exclusive interview.

Who was more scared of Mischief doing real magic, Mischief or Penn and Teller?

Haha, I think we were all quite excited. Although there are a few tricks that I find quite scary. You'd have to ask P&T though.

The casting in all your shows is perfect. Do you write with yourselves in mind for particular roles, or is it a fight to the death for the characters the rest of the company want?

Yeah, we always write for each other and the way we workshop means the characters always fit everyone. No fights at all.

You guys are doing very real tricks and things are bound to go wrong. Can you share a moment something genuinely went wrong on the Vaudeville stage?

There is a trick where Dave is locked in a cubic tonne of water! It's terrifying, there have been a few times where that has gone wrong and he's had to be fished out pretty quickly!

What do you think would be the funniest animal to fly out of a hat? (doesn’t have to have wings)

Elephant. How would it get in there! Or a barn owl maybe. I'd have to see it to know.

How would you describe The Goes Wrong Show to someone who has never been?

It does what it says on the tin. It's about a group of actors (or magicians) desperately trying to put on the perfect show but they're doomed to have everything that could possibly go wrong happen.

If Henry Lewis wasn’t the Mind Mangler, who in the company would be?

Well Larry is the understudy and he's so funny and when the show is recast Harry Kershaw is taking over. He's brilliant.

How often do you have to rehearse or practice tricks?

If any Harry Potter character could be written in who would it be and why?

Argh! I don't know it well enough. I'm going to say Hagrid, he'd mix things up a bit. Maybe Hermoine? I think Harry would be too much of a star.

Who would you want Penn and Teller to play in The Play That Goes Wrong?

Forget what you saw on television-a night at "The play that goes wrong" is the best night out I have had in years. Arrive early-take your seat and prepare to spend the whole evening laughing till you ache from laughing.
Another great night was "Peter Pan " at Alexandra Palace. On the stage everything is so much funnier than what you can appreciate on television. The cast work so hard I am amazed they do not all end up in plaster casts.
The Bank Robbery that goes wrong was also a good night. I am looking forward to when the shut-down is over so I can go and enjoy ( I am sure!!) the Magic that goes wrong show.
This is a group who work very hard to entertain-great team work FANTASTIC AND WORTH EVERY PENNY.